Ekrixinatosaurus (‘explosion-born reptile’) is a genus of theropod dinosaur which lived during the Late Cretaceous. Its fossils have been found in Argentina. The type species, Ekrixinatosaurus novasi, was first described in 2004 by Argentinian paleontologist Jorge Calvo, and Chilean paleontologists David Rubilar-Rogers and Karen Moreno. It was discovered in the Candeleros Formation, a geologic formation that outcrops in Río Negro, Neuquén, and Mendoza provinces of Argentina. The formation dates from 100-97 mya.

Ekrixinatosaurus novasi is a large ceratosaur with a relatively large head and robust limbs, the only known specimen being between 7–8 m (23–26 ft) in length, some suggested that this specimen actually represented the largest ceratosaur yet described at 10–11 m (33–36 ft) in length, surpassing the type of Carnotaurus. However, it was later noted by other researchers that this estimate was based only on the absolute size of the skull, ignoring that limb bone comparisons clearly show Carnotaurus was larger, thus Carnotaurus was larger than Ekrixinatosaurus but with a proportionally smaller head. Most recently, a 2016 study again found it to be smaller (7.4 m) than Carnotaurus (7.8 m). 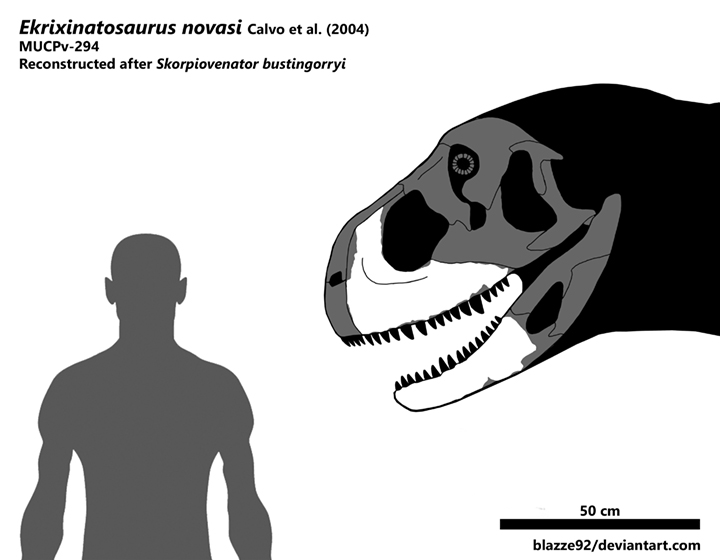 Ekrixinatosaurus shared its environment with the titanosaurian sauropod Andesaurus and the rebbachisaurid sauropods Limaysaurus and Nopcsaspondylus. Iguanodont ornithischian remains have reportedly also been found. The carcharodontosaurid Giganotosaurus was possibly the apex predator. Smaller predators also inhabited the area. These included the dromaeosaurid Buitreraptor, the alvarezsaurid Alnashetri, and the basal coelurosaurian Bicentenaria. The primitive snake Najash lived here as well, along with turtles, fish, frogs, and cladotherian mammals. Pterosaurs also lived in the area.

Is Rexy Going To Be In Jurassic World 2?

Rexy was by far one of the best parts of...

How to Install The Jurassic Park DLC for Minecraft

This guide will teach players the steps to...

Could Evolution Lead to a Return of Dinosaurs?

Dinosaurs Were Sniffing Flowers Millions of Years Before Humans Even Existed

Finding the Missing Link in Land Vertebrates' Emergence From Sea

After half a century of studying prehistoric...

Take a look back at the movie that started...