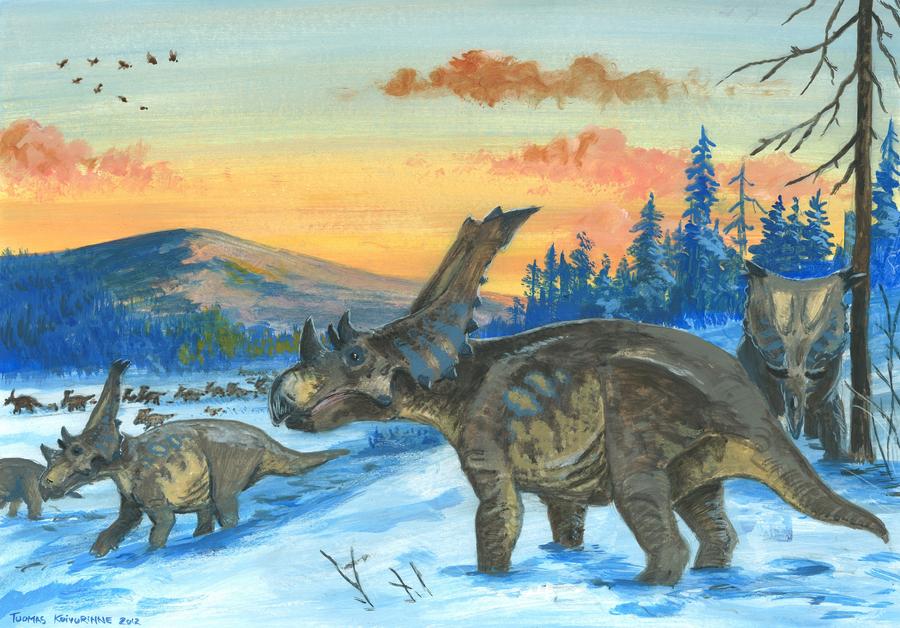 Chasmosaurus is a genus of ceratopsid dinosaur from the Upper Cretaceous Period of North America. Its name means ‘opening lizard’, referring to the large openings (fenestrae) in its frill (Greek chasma meaning ‘opening’ or ‘hollow’ or ‘gulf’ and sauros meaning ‘lizard’). With a length of 4.3–4.8 metres (14.1–15.7 ft) and a weight of 1.5–2 tonnes (1.7–2.2 short tons), Chasmosaurus was a ceratopsian of average size. Like all ceratopsians, it was purely herbivorous. It was initially to be called Protorosaurus, but this name had been previously published for another animal. All specimens of Chasmosaurus were collected from the Dinosaur Park Formation of the Dinosaur Provincial Park of Alberta, Canada. C. russelli comes from the lower beds of the formation while C. belli comes from middle and upper beds.

Chasmosaurus was a medium-size ceratopsid. In 2010 G.S. Paul estimated the length of C. belli at 4.8 metres, its weight at two tonnes; C. russelli would have been 4.3 metres long and weighed 1.5 tonnes. The known differences between the two species mainly pertain to the horn and frill shape, as the postcrania of C. russelli are poorly known. Like many ceratopsians, Chasmosaurus had three main facial horns - one on the nose and two on the brow. In both species these horns are quite short, but with C. russelli they are somewhat longer, especially the brow horns, and more curved backwards. The frill of Chasmosaurus is very elongated and broader at the rear than at the front. It is hardly elevated from the plane of the snout. With C. belli the rear of the frill is V-shaped and its sides are straight. With C. russelli the rear edge is shaped as a shallow U, and the sides are more convex. The sides were adorned by six to nine smaller skin ossifications (called episquamosals) or osteoderms, which attached to the squamosal bone. The corner of the frill featured two larger osteoderms on the parietal bone. With C. russelli the outer one was the largest, with C. belli the inner one. The remainder of the rear edge lacked osteoderms. The parietal bones of the frill were pierced by very large openings, after which the genus was named: the parietal fenestrae. These were not oval in shape, as with most relatives, but triangular, with one point orientated towards the frill corner.

In 1898, Lawrence Morris Lambe of the Geological Survey of Canada made at the Berry Creek the first discovery of Chasmosaurus remains, holotype NMC 491, a parietal bone that was part of a neck frill. Although recognizing that his find represented a new species, Lambe thought this could be placed in a previously-known short-frilled ceratopsian genus: Monoclonius. He erected the new species Monoclonius belli to describe his findings. The specific name honoured collector Walter Bell.

However, in 1913, Charles Hazelius Sternberg and his sons found several complete "M. belli" skulls in the middle Dinosaur Park Formation of Alberta, Canada. Based on these finds, Lambe (1914) erected Protorosaurus ("before Torosaurus), but that name was preoccupied by the Permian reptile Protorosaurus, so he subsequently created the replacement name Chasmosaurus in February 1914. The name Chasmosaurus is derived from Greek χάσμα, khasma, "opening" or "divide" and refers to the very large parietal fenestrae in the skull frill. Lambe now also assigned a paratype, specimen NMC 2245 found by the Sternbergs in 1913 and consisting of a largely complete skeleton, including skin impressions.

Since that date, more remains, including skulls, have been found that have been referred to Chasmosaurus, and several additional species have been named within the genus. Today some of these are considered to only reflect a morphological variation among the known sample of Chasmosaurus belli skulls; others are seen as valid species of Chasmosaurus or as separate genera.

Chasmosaurus shared its habitat, the east coast of Laramidia, with successive species of Centrosaurus. A certain niche partitioning is suggested by the fact that Chasmosaurus had a longer snout and jaws and might have been more selective about the plants it ate.

The function of the frill and horns is problematic. The horns are rather short and the frill had such large fenestrae that it could not have offered much functional defense. Paul suggested that the beak was the main defensive weapon. It is possible that the frill was simply used to appear imposing or conceivably for thermoregulation. The frill may also have been brightly colored, to draw attention to its size or as part of a mating display. However, it is difficult to prove any sexual dimorphism. In 1933, Lull suggested that C. kaiseni, which bore long brow horns, was in fact the male of C. belli of which the females would have short ones. In 1927 C.M. Sternberg concluded that of the two skeletons he had mounted in the Canadian Museum of Nature, the smaller one, NMC 2245, was the male and the larger, NMC 2280, the female. However, today the two are referred to different species.

‘Dinosaurs: The Myth-Busting Guide to Prehistoric Beasts’ Perpetuates Some Myths of Its Own

Jurassic World 3: What The Dominion Title Means For The Movie