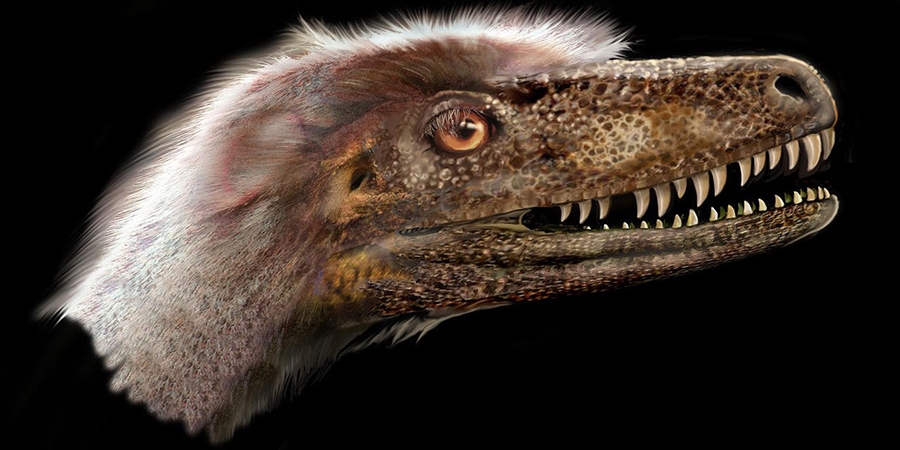 The discovery of a nearly complete fossil of a small, feathered dinosaur in an Alberta provincial park sheds new light on how “raptor” dinosaurs evolved around the world, according to new research by University of Alberta paleontologists.

The 76-million-year-old species, known as Saurornitholestes langstoni, was long thought to be so closely related to Velociraptor from Mongolia that some researchers called it Velociraptor langstoni.

“Paleontology in general is a gigantic puzzle where most of the pieces are missing. The discovery and description of this specimen represents the recovery of many pieces of the puzzle,” said Currie, who holds the Canada Research Chair in Dinosaur Paleobiology.

“This ranks in the top discoveries of my career. It is pretty amazing.”

Saurornitholestes is a small, feathered carnivorous dinosaur within the dromaeosaurid family—also known as raptors—that was previously known from fragmentary remains. Discovered by Coy in Alberta’s Dinosaur Provincial Park in 2014, the new skeleton is remarkably complete and exquisitely preserved, with all the bones except for the tail preserved in life position.

“Because of their small size and delicate bones, small meat-eating dinosaur skeletons are exceptionally rare in the fossil record. The new skeleton is by far the most complete and best-preserved raptor skeleton ever found in North America. It’s a scientific gold mine,” said Evans.

The research, which focuses on the skull, shows that the North American form has a shorter and deeper skull than the Velociraptor. At the front of the fossil's mouth, the researchers also discovered a flat tooth with long ridges, which was likely used for preening feathers. The same tooth has since been identified in Velociraptor and other dromaeosaurids.

“The new anatomical information we have clearly shows that the North American dromaeosaurids are a separate lineage from the Asian dromaeosaurids, although they do have a common ancestor,” said Currie.

“This changes our understanding of intercontinental movements of these animals and ultimately will help us understand their evolution.”

Future research will investigate the remainder of the skeleton as well as additional analyses on the relationships between dromaeosaurids.

The study, “Cranial Anatomy of New Specimens of Saurornitholestes langstoni (Dinosauria, Theropoda, Dromaeosauridae) From the Dinosaur Park Formation (Campanian) of Alberta,” was published in The Anatomical Record.

Not everything was easy behind the scenes of...

'Dueling Dinosaurs' Fossils Show Triceratops, T. rex, May Have Died After a Battle

About 67 million years ago, two iconic...

While it’s impossible for any scientists or...

The first tracings of dinosaurs in Missouri...

How To Throw The Perfect Dinosaur-Themed Birthday Party

Who hasn’t gone through the phase of being...

When And How Did Dinosaurs Go Extinct?