The largest ever fossil of a prehistoric spider which was weaving webs when dinosaurs ruled the Earth has been discovered by scientists.

Its fossilized features have been so perfectly preserved from 165 million years ago that experts have identified it down to the exact species and were even able to tell it was an adult female.

The Golden Orb Weaver has been named Nephila jurassica and is the largest fossil of a spider ever found.

It is roughly the size of the spider’s modern-day descendants, with a body one-inch long and more than half an inch wide, and legs that stretch to 2.5in.

It lived in the forests of northern China when the climate was much warmer and more tropical than today.

Its discovery means Golden Orb Weavers, or ‘nephilids’ – giant spiders that can grow bigger than a human hand and which still thrive today – are the longest ranging spider genus known to man in terms of age.

Palaeontologist Professor Paul Selden, of Kansas University, said the females are the largest web-weaving spiders alive today with a body length of up to 2in and a leg span of 6in. Males are relatively small in comparison.

They are ‘common and spectacular’ inhabitants of tropical and subtropical regions with females weaving distinctive 5ft-wide webs of yellow silk that glisten like gold in sunlight.

Prof Selden, who reported his discovery in the Royal Society journal Biology Letters, said: ‘Here, we describe the largest known fossil spider: a female Nephila from the Middle Jurassic of China.’

Microscopic examination of the female revealed clear details including the brushes of long bristles on the ends of her legs that are characteristic of the Golden Orb Weaver.

The spider was dug up at a site called Daohugou in Inner Mongolia that is filled with fossilized salamanders, small primitive mammals, insects and water crustaceans.During the Jurassic era, the fossil bed was part of a lake in a volcanic region.

Spider fossils from this period are rare, because the arachnids’ soft bodies are easily destroyed. 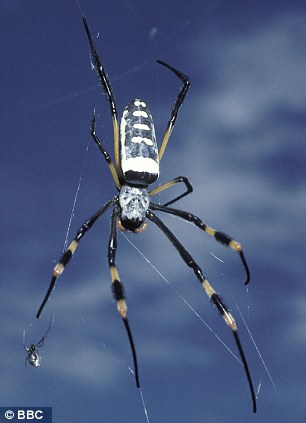 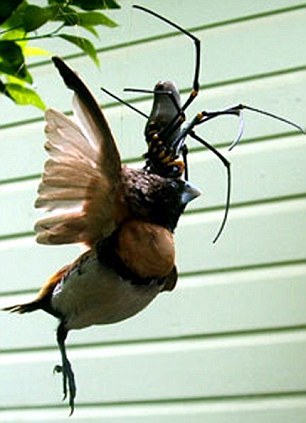 The pristine Nephila jurassica was probably created when the spider was quickly encased in a tomb of silt and ash during a volcanic eruption to keep it from being scavenged or decaying.

Prof Selden said the find means Golden Orb Weavers must have an unusually ancient lineage, an extremely long range for any animal genus.

Their prized webs were being woven to capture moths and beetles in the days of T Rex, and influenced insect evolution.

The Golden Orb Weaver spins a strong web high in protein because it depends on it to capture large insects for food.

The find also suggests the climate was ‘warm and humid at this time’.

‘Predation by these spiders would have played an important role in the natural selection of contemporaneous insects.’

10 Reasons Why We Need A Survival-Horror Jurassic Park Game

The Jurassic Park franchise has an...

A team of paleontologists from Australia and...

Spinosaurus Versus the “African T-Rex”, Carcharodontosaurus: Who Would Win?

Paleontologists have discovered an ancient...

Utahraptor Rips Way Through Senate Toward Becoming the State Dinosaur

Everything You Thought You Knew About Dinosaur Colours is Wrong

The new science of paleocolour is shining a...

Familiar Dinosaurs Photographed on the Set of Jurassic World 2!