The Origin of Tetrapods | Paleontology World

The Origin of Tetrapods

The word “tetrapod” means “four feet” and includes all species alive today that have four feet — but this group also includes many animals that don’t have four feet. That’s because the group includes all the organisms (living and extinct) that descended from the last common ancestor of amphibians, reptiles, and mammals. So, for example, the ichthyosaur, an extinct swimming reptile, is a tetrapod even though it did not use its limbs to walk on land. So is the snake, even though it has no limbs. And birds and humans are tetrapods even though they only walk on two legs. All these animals are tetrapods because they descend from the tetrapod ancestor described above, even if they have secondarily lost their “four feet.”

Tetrapods evolved from a finned organism that lived in the water. However, this ancestor was not like most of the fish we are familiar with today. Most animals we call fishes today are ray-finned fishes, the group nearest the root of this evogram. Ray-finned fishes comprise some 25,000 living species, far more than all the other vertebrates combined. They have fin rays — that is, a system of often branching bony rays (called lepidotrichia) that emanate from the base of the fin.

In contrast, the other animals in the evogram — coelacanths, lungfishes, all the other extinct animals, plus tetrapods (represented by Charles Darwin) — have what we call “fleshy fins” or “lobe fins.” That is, their limbs are covered by muscle and skin. Some, such as coelacanths, retain lepidotrichia at the ends of these fleshy limbs, but in most fleshy-finned animals these have been lost. 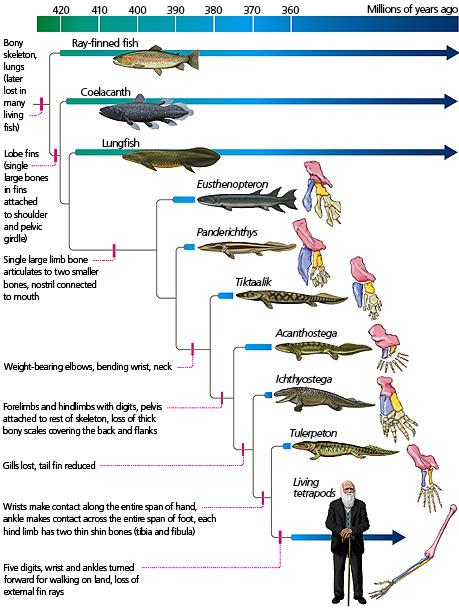 The common ancestor of all those different organisms (ray-fins, coelacanths, lungfishes, tetrapods, etc.) was neither a lobe-fin nor a ray-fin. This ancient vertebrate lineage had fins (with lepidotrichia), scales, gills, and lived in the water. Yet they also had air bladders (air-filled sacs) connected to the back of their throats that could be used for breathing air (i.e., as lungs) or for buoyancy control. The air bladders of many ray-fins no longer connect to their throats, and so they are not able to breathe air. In these ray-fins, the air bladder is used mainly for buoyancy control and is known as a swim bladder. By contrast, tetrapods have taken an alternative route: they have lost the buoyancy control function of their air bladders, and instead this organ been elaborated to form the lungs that we all use to get around on land.

When we get past coelacanths and lungfishes on the evogram, we find a series of fossil forms that lived between about 390 and 360 million years ago during the Devonian Period. During this interval, this lineage of fleshy-finned organisms moved from the water to the land. Many parts of the skeleton changed as new innovations that permitted life on land evolved.

As lineages moved into shallower water and onto land, the vertebral column gradually evolved as well. You may have noticed that fishes have no necks. Their heads are simply connected to their shoulders, and their individual vertebrae look quite similar to one another, all the way down the body. Mobile necks allow land animals to look down to see the things on the ground that they might want to eat. In shallow water dwellers and land dwellers, the first neck vertebra evolved different shapes, which allowed the animals to move their heads up and down. Eventually, the second neck vertebra evolved as well, allowing them to move their heads left and right. Later tetrapods evolved necks with seven or more vertebrae, some long and some short, permitting even more mobility.

The vertebrae you are probably most familiar with (like our own!) consist of a spool-like centrum, which connects in front and back with other centra. On top of the centra are vertebral spines and arches to which muscle segments attach, and lateral to the centra are the ribs; these anchor muscles that flex as the animals move. Fishes swim with simple lateral motions, so their arches are relatively straight and needle-like, and so are their ribs. When you eat fish and pick out the bones, these are mostly what you’re finding. Because fishes live in the water, gravity is not a big problem for them. But on land, a quadruped with a backbone between forelimbs and hindlimbs faces the same problems as a bridge designer: sag. As the fleshy-finned organisms began to venture onto land, they evolved a series of interlocking articulations on each vertebra, which helped them overcome sag and hold the backbone straight with minimal muscular effort.

The connection between the pelvis and hindlimbs in early tetrapods is a prime example of exaptation. We call this fused connection the sacrum. It is extremely useful for terrestrial organisms because it allows them to use their hindlimbs efficiently for locomotion on land. Since the aquatic ancestors of fishes and tetrapods had no such connection, one might guess that this feature first evolved serving the function of enabling terrestrial locomotion. However, the earliest form of this connection (as seen in Acanthostega) evolved while these tetrapod precursors were still living in the water. Based on current evidence, Acanthostega appears to have been fully aquatic, so this connection likely evolved to function in something other than terrestrial locomotion. Only later, as tetrapod ancestors moved onto land, was this trait co-opted for terrestrial support — and as it was, additional vertebrae were fused in the same way, providing further support.

As the limbs and their connections to the rest of the skeleton evolved, limb bones took on distinct roles and many bones were lost. The humerus and the femur were already connected to two outer bones (the radius and ulna in the forelimb, the tibia and fibula in the hindlimb). This is something that evolved about 30 million years before vertebrates came onto land. However, muscular connections between these bones began to change on the road to land and allowed the limbs to be used for terrestrial locomotion. The ankle was originally composed of many small bones arranged in two rows, but gradually many of these small bones were lost. The first animals to get close to walking on land had eight digits on each limb. Over time, some of these digits were lost, leading to animals with seven digits, then six, and then five, which is the common condition now seen in living tetrapods.

As these animals evolved to live on land, other changes in the rest of their bodies evolved. Many would eventually lose their gills, which only work well for getting oxygen when wet, and their tail fins got smaller. Similarly they lost the lateral line system, a network of vibration-sensitive canals along the skull and jaw, which doesn’t work out of water.

The environments of the animals shown in this evogram also changed through time. In fact, if you were to venture back to Arizona at the beginning of the “Age of Dinosaurs” in the Triassic Period, some 225 million years ago, you would find ray-fins, coelacanths, and lungfishes living in the marshes, streams, and temporary ponds of that day, along with freshwater sharks. So the habitats that these animals occupy today are not necessarily the ones in which they have always lived, or in which they originally evolved. It is still unclear exactly where the transition from water to land took place ecologically. Paleontologists have discovered fossils involved in this transition preserved from freshwater, brackish, and marine habitats. Regardless of where the transition occurred, eventually early ancestors of the first tetrapods came up onto land — although not all stayed. Some, like the whales, made the transition back into the water.