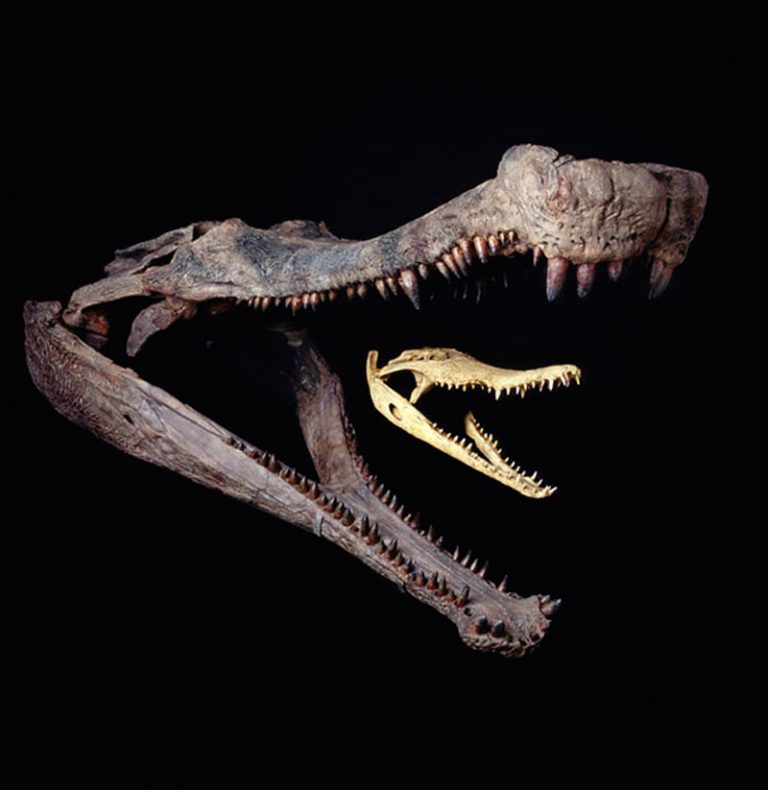 Sarcosuchus (meaning “flesh crocodile”) is a genus of crocodyliform and distant relative of living crocodylians that lived 112 million years ago. It dates from the early Cretaceous Period of what is now Africa and South America and is one of the largest crocodile-like reptiles that ever lived. It was almost twice as long as the modern saltwater crocodile and weighed up to 8 tonnes.

Sarcosuchus Is Also Known as the SuperCroc

The name Sarcosuchus is Greek for “flesh crocodile,” but that apparently wasn’t impressive enough for the producers at National Geographic. In 2001, this cable channel bestowed the title “SuperCroc” on its hour-long documentary about Sarcosuchus, a name that has since stuck in the popular imagination. (By the way, there are other “-crocs” in the prehistoric bestiary, none of which are quite as popular as SuperCroc: for example, have you ever heard of the BoarCroc or the DuckCroc?)

Unlike modern crocodiles, which attain their full adult size in about ten years, Sarcosuchus seems to hve kept growing and growing at a steady rate throughout its lifetime (paleontologists can determine this by examining bone cross-sections from various fossilized specimens). As a result, the largest, most superannuated SuperCrocs reached lengths of up to 40 feet from head to tail, compared to about 25 feet max for the biggest croc alive today, the Saltwater Crocodile.

Sarcosuchus Adults May Have Weighed More than 10 Tons

What made Sarcosuchus truly impressive was its dinosaur-worthy weight: more than ten tons for those 40-foot-long senior citizens described in the previous slide, and perhaps seven or eight tons for the average adult. If the SuperCroc had lived after the dinosaurs had gone extinct, rather than right alongside them during the middle Cretaceous period (about 100 million years ago), it would have counted as one of the largest land-dwelling animals on the face of the earth!

Sarcosuchus May Have Tangled With Spinosaurus

Although it’s unlikely that Sarcosuchus deliberately hunted dinosaurs for lunch, there’s no reason it had to tolerate other predators that competed with it for limited food resources. A full-grown SuperCroc would have been more than capable of breaking the neck of a large theropod, such as, say, the contemporary, fish-eating Spinosaurus, the largest meat-eating dinosaur that ever lived.

The Eyes of Sarcosuchus Rolled Up and Down, not Left and Right 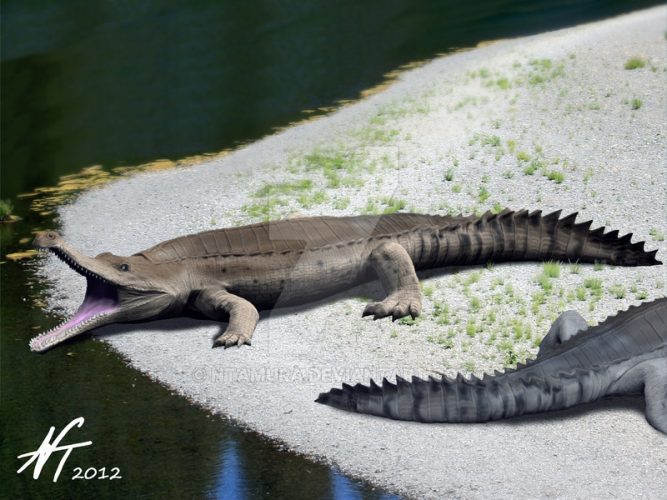 You can tell a lot about an animal”s accustomed behavior by observing the shape, structure, and placement of its eyes. The eyes of Sarcosuchus didn’t move left and right, like those of a cow or panther, but rather up and down, indicating that the SuperCroc spent much of its time submerged partway below the surface of freshwater rivers (like modern crocodiles), scanning the banks for interlopers and occasionally breaching the surface to snap at encroaching dinosaurs and drag them into the water.

Sarcosuchus Lived in What (Today) Is the Sahara Desert

One hundred million years ago, northern Africa was a lush, tropical region crisscrossed by numerous rivers; it has only been relatively recently (geologically speaking) that this area dried out and became overspread by the Sahara, the largest desert in the world. Sarcosuchus was only one of a wide variety of plus-sized reptiles that took advantage of this region’s natural abundance during the later Mesozoic Era, basking in its year-round heat and humidity; there were also plenty of dinosaurs to keep this croc company!

The Snout of Sarcosuchus Ended in a “Bulla”

The bulbous depression, or “bulla,” at the end of Sarcosuchus’ long, narrow snout continues to be a mystery to paleontologists. This may have been a sexually selected characteristic (that is, males with larger bullas were more attractive to females during mating season, and thus managed to perpetuate the trait), an enhanced olfactory (smelling) organ, a blunt weapon deployed in intra-species combat, or even a sounding chamber that allowed Sarcosuchus individuals to communicate with each other over long distances.

You’d think a crocodile as big and heavy as Sarcosuchus would have feasted exclusively on the plus-sized dinosaurs of its habitat–say, half-ton hadrosaurs that wandered too close to the river for a drink. Judging by the length and shape of its snout, though, it’s likely that the SuperCroc ate fish pretty much exclusively (gigantic theropods equipped with similar snouts, like Spinosaurus, also enjoyed piscivorous diets), only feasting on dinosaurs when the opportunity was too good to pass up.

Sarcosuchus Was Technically a “Pholidosaur”

Its catchy nickname aside, the SuperCroc wasn’t a direct descendant of modern crocodiles, but rather an obscure type of prehistoric reptile known as a “pholidosaur.” (By contrast, the almost-as-big Deinosuchus was a genuine member of the crocodile family, though it has technically been classified as an alligator!) The crocodile-like pholidosaurs went extinct millions of years ago, for reasons that are still uncertain, and haven’t left any direct living descendants.

Sarcosuchus Was Covered Head to Tail in Osteoderms

The osteoderms, or armored plates, of modern crocodiles aren’t continuous–you can detect a break (if you dare to venture close enough) between their necks and the rest of their bodies. Not so with Sarcosuchus, the entire body of which was covered with these plates, except for the end of its tail and the front of its head. Tellingly, this arrangement is similar to that of another crocodile-like pholidosaur of the middle Cretaceous period, Araripesuchus, and may have had a deleterious effect on Sarcosuchus’ overall flexibility.