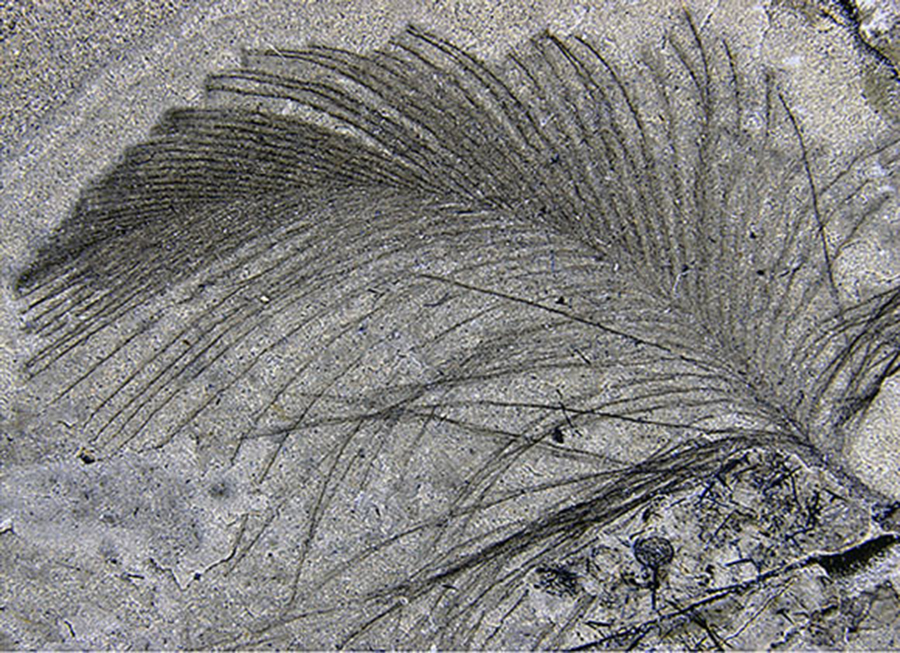 Paleontologists have discovered the fossilized feathers of dinosaurs and birds that lived 118 million years ago (Early Cretaceous period) in polar environment (around 70°S) in what is now southeastern Australia.

Exceptionally preserved feathered dinosaur fossils (including birds) from the Mesozoic era are famous, but recognized from only very few localities worldwide, and are especially rare in the Southern Hemisphere.

Dr. Benjamin Kear of Uppsala University and colleagues found and analyzed a collection of 10 Mesozoic fossil feathers in Australia.

The fossils reveal an unexpected diversity of tufted hair-like ‘proto-feathers’ from meat-eating dinosaurs, together with downy body feathers, and wing feathers from primitive birds that would have been used for flight.

The finds were all entombed in fine muddy sediments that accumulated at the bottom of a shallow lake close to the South Pole during the Age of Dinosaurs.

“Dinosaur skeletons and even the fragile bones of early birds have been found at ancient high-latitudes before,” Dr. Kear said.

“Yet, to date, no directly attributable integumentary remains have been discovered to show that dinosaurs used feathers to survive in extreme polar habitats.”

“These Australian fossil feathers are therefore highly significant because they came from dinosaurs and small birds that were living in a seasonally very cold environment with months of polar darkness every year.”

The fossil feathers were discovered in the Koonwarra Fish Beds Geological Reserve, which is a heritage listed site 145 km southeast of Melbourne in Victoria, Australia.

“Fossil feathers have been known from Koonwarra since the early 1960s, and were recognized as evidence of ancient birds, but have otherwise received very little scientific attention,” said Dr. Thomas Rich, a researcher at Melbourne Museum.

“Our study is thus the first to comprehensively document these remains, which include new specimens that were examined using cutting-edge technologies.”

Using advanced microscopic and spectroscopic techniques, the team determined the anatomy and preservation of the Koonwarra fossil dinosaur and bird feathers.

“The Koonwarra feathers are preserved in incredible detail. There are even tiny filament-like structures that would have ‘zipped’ the feather vanes together, just as in the flight feathers of modern birds,” said Professor Patricia Vickers-Rich, from Monash University and the Swinburne University of Technology.

However, unlike the structurally complex feathers of birds today, which are characterized by interlocking branches called barbs and barbules, different kinds of small dinosaurs had coverings that comprised much more simpler hair-like ‘proto-feathers’.

“Dinosaur ‘proto-feathers’ would have been used for insulation. The discovery of ‘proto-feathers’ at Koonwarra therefore suggests that fluffy feather coats might have helped small dinosaurs keep warm in ancient polar habitats,” said Dr. Martin Kundrát, of the Pavol Jozef Safarik University.

These traces occurred across the uniformly dark feather surfaces, as well as in distinct bands that might represent original patterning from the polar dinosaurs and birds.

Melanic residues have been reported on fossil feathers from elsewhere around the world, and are widely acknowledged as indicators of dinosaur coloration.

Possible preservation of biomolecules was also assessed, but proved to be too degraded, and were apparently lost during weathering of the rock.

The team’s work was published in the journal Gondwana Research.