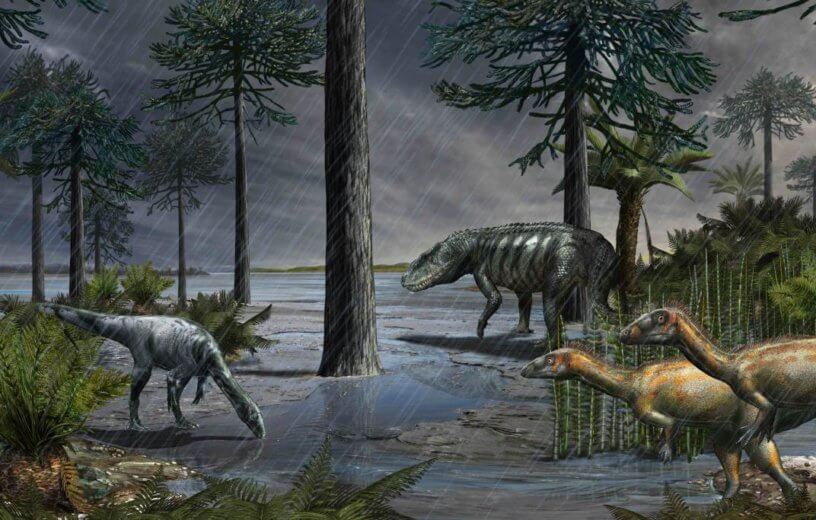 Scientists generally agree that dinosaurs died off as a result of a giant meteor hitting the Earth 66 million years ago, but a recent study now claims the end for the prehistoric creatures may have been no different than their oft-debated beginning.

The coalition of researchers from the United Kingdom and Italy who led the research argue that dinosaurs might not have gotten a foothold on the planet without another mass extinction 232 million years ago. Dinosaurs had already started to evolve by this point, but the mass extinction in question, named the Carnian Pluvial Episode, likely caused the diversification of the dinosaurs that led to their eventual conquest of the planet, the researchers say.

The scientists point to a prevalence of different dinosaur tracks starting in rock formations found in the Dolomites in northern Italy — a stark difference from rocks several million years older. The formations show a sudden explosion in dinosaur tracks within the formations, yielding similar findings to fossils unearthed in Argentina and Brazil and dating to the same period of time.

“We were excited to see that the footprints and skeletons told the same story. We had been studying the footprints in the Dolomites for some time, and it’s amazing how clear cut the change from ‘no dinosaurs’ to ‘all dinosaurs’ was,” explains study co-author Dr. Massimo Bernardi, a research associate at Bristol’s School of Earth Sciences, in a university release.

The point of the explosion of dinosaur tracks occurs at the end of Carnian Pluvial Episode, which scientists say was marked by climates shifting rapidly from dry to humid, and then back to dry, across the globe. It’s believed that massive eruptions in Western Canada led to periods of global warming, acid rain, and the extinction of many species both in land and water.

“The discovery of the existence of a link between the first diversification of dinosaurs and a global mass extinction is important,” notes co-author Mike Benton, a professor at Bristol. “The extinction didn’t just clear the way for the age of the dinosaurs, but also for the origins of many modern groups, including lizards, crocodiles, turtles, and mammals – key land animals today.”

The full study was published April 16, 2018 in the journal Nature Communications.