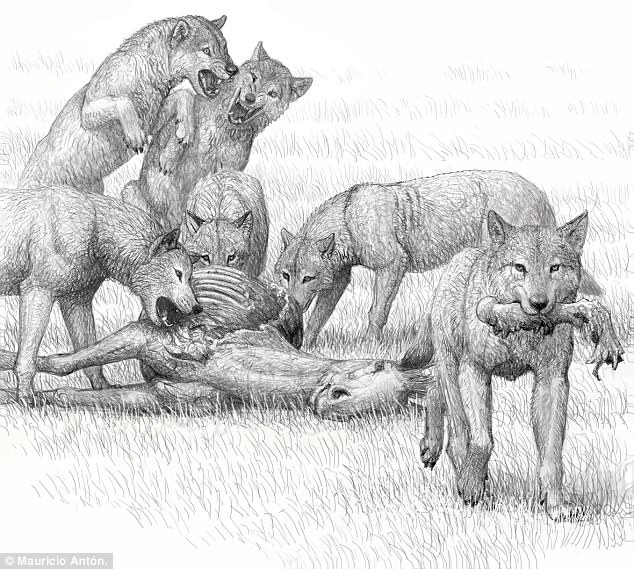 Long-extinct relatives of today's dogs and wolves may have used their powerful jaws to crush bones, and the proof is in the animals' fossilized poop.

Domestic dogs are known to enjoy chewing large bones, but they lack the jaw strength to pulverize them. In fact, in today's ecosystems, the only large predators with skulls and jaws powerful enough to splinter bones are hyenas. But that wasn't the case millions of years ago, researchers reported in a new study.

Scientists had known from years of analyzing fossils of a wolf-size species of wild dog called Borophagus parvus — which lived from about 16 million to 2 million years ago — that its skull and powerful jawbone shared many features with those of bone-crunching spotted hyenas (Crocuta crocuta), according to the study. While this suggested the canid also could crush bones, scientists still couldn't be sure that was true, study co-author Jack Tseng, a functional anatomist at the University at Buffalo, told Live Science in an email.

"You could say we were scientifically constipated," Tseng said.

However, the floodgates were opened with the discovery of a cache of coprolites — 14 pieces of fossilized poop — at a site in California's Mehrten Formation. The location dates to the late Miocene epoch, about 5.3 million to 6.4 million years ago, and is known for being rich in Borophagus fossils; the coprolites, which are much rarer than bones, are thought to be about 2 million years old, the study authors reported.

Using micro-computed X-ray tomography (micro-CT) scans to peer inside the ancient poop, the researchers discovered plenty of bone splinters and fragments in all of the specimens, adding up to an average of 5 percent of the coprolites' mass.

"Rarely do paleontologists get the chance to validate our skull-centric research using the other end," Tseng said. And in this instance, the coprolites also told the researchers that Borophagus' eating habits didn't resemble spotted hyenas' as much as they'd thought.

Spotted hyenas thoroughly digest swallowed bones; consequently, when they poop, they produce "mochi-like balls of feces that are full of bone powder," Tseng said. Borophagus poop, on the other hand, held fragments of undissolved bone, suggesting that while the extinct dogs may have swallowed bones like spotted hyenas, they digested them like striped hyenas (Hyaena hyaena) and brown hyenas (Hyaena brunnea), which don't process bones as efficiently as their spotted cousins, Tseng said.

As well as providing clues to Borophagus' diet and digestion, the fossilized poo also testified to how they may have lived. Coprolites were found in communal "latrines" used by multiple individuals, suggesting Borophaguswere social, territorial animals, according to the study. Modern hyenas, which are also social hunters, offer a glimpse of how that behavior might be linked to bone crushing after a successful hunt, study lead author Xiaoming Wang, a curator in the Department of Vertebrate Paleontology at the Natural History Museum in Los Angeles, told Live Science in an email.

"While social hunting helps in overcoming large prey, once the prey is secured, the feeding itself is also highly competitive. So competitive, in fact, that individual hyenas have no time to chew their meat, and they simply break down the prey in large enough chunks and quickly swallow bones and meat together, in order to grab the next bite of food," Wang explained.

The findings were published online May 22 in the journal eLife.