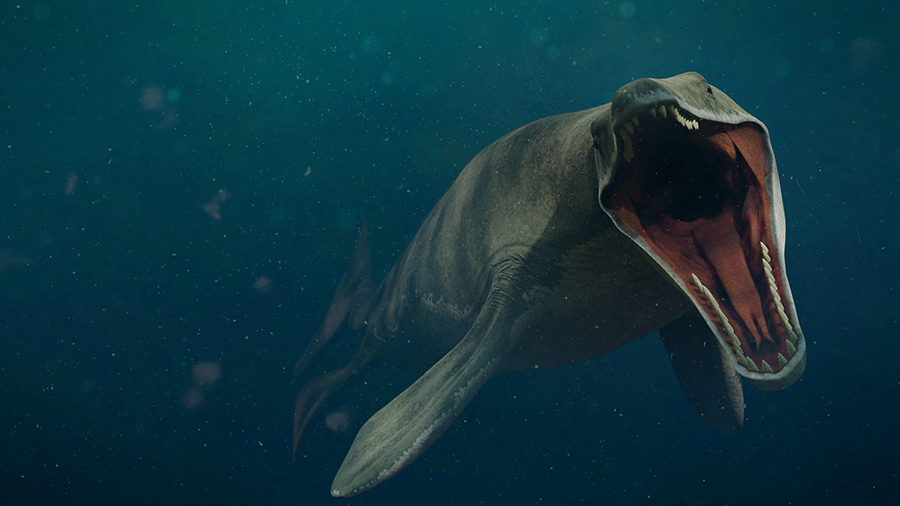 Mosasaurus and other mosasaurs ruled the seas for millions of years.

Mosasaurus was a ferocious predator in the ancient oceans of the Cretaceous period (145.5 million to 65.5 million years ago). While dinosaurs dominated the land, Mosasaurus used its long tail and stumpy, paddle-like limbs to cruise through the water, devouring all kinds of prey with its massive jaws and sharp, cone-shaped teeth.

Mosasaurus is one genus, or group of species, out of dozens that made up a diverse family of marine reptiles called mosasaurs. The mosasaurs ruled the ocean in the late Cretaceous period. They were not sea dinosaurs, but a separate group of reptiles, more closely related to modern snakes and lizards, according to the Philip J. Currie Dinosaur Museum.

Mosasaurs went extinct 65.5 million years ago in the same mass extinction event that wiped out the dinosaurs, Live Science previously reported. A Mosasaurus species has since been fictionally resurrected on the big screen, most notably in the 2015 movie blockbuster "Jurassic World," increasing the profile of this mighty group of marine reptiles.

HOW BIG WAS MOSASAURUS AND OTHER MOSASAURS? 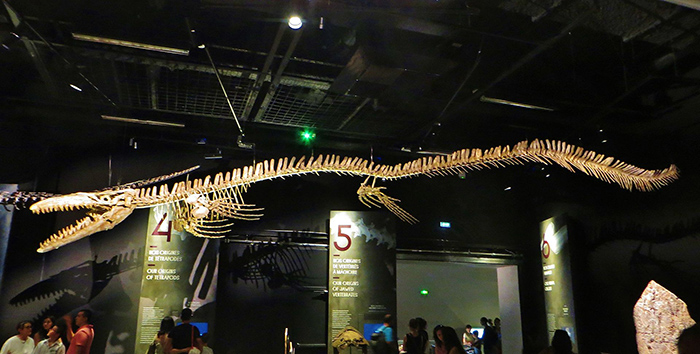 Mosasaurus species are among the largest members of the mosasaur family, according to the Philip J. Currie Dinosaur Museum. One of the biggest specimens ever found was identified as Mosasaurus hoffmanni and was estimated to be about 56 feet (17 meters) long in life, according to a 2014 study published in the journal Proceedings of the Zoological Institute RAS. Not all mosasaurs were giants though. Some species, such as Xenodens calminechari, were only about the size of a porpoise, Live Science previously reported.

The biggest Mosasaurus would have been comparable in size to the mighty Megalodon — a giant shark that dominated oceans in the middle Miocene and Pliocene epochs (15.9 million to 2.6 million years ago), long after the mosasaurs went extinct 65.5 million years ago. Megalodons could have reached up to 49 to 59 feet (15 to 18 meters) long, according to the Natural History Museum (NHM) in London. Neither of these predators, however, were ever as big as the modern blue whale, which can reach up to 110 feet (34 meters) long and is the biggest known animal to have ever existed.

WHAT DID MOSASAURS EAT, AND HOW DID THEY CATCH IT? 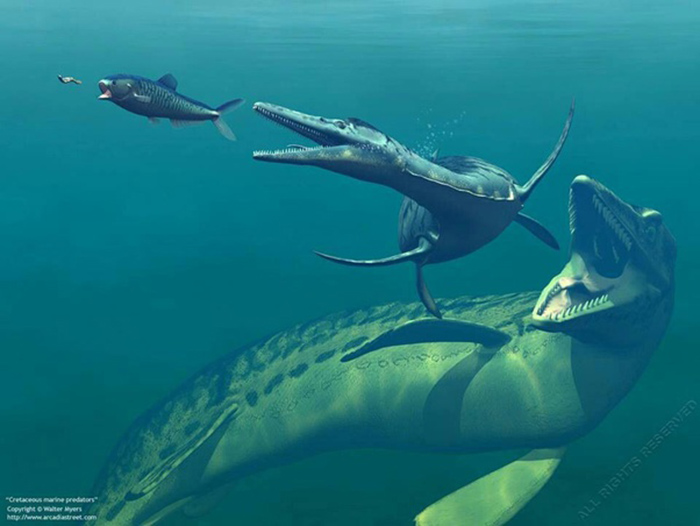 Mosasaurs were the ocean's most dominant predator at the end of the Cretaceous period and lived across the world's oceans. Large mosasaurs would have likely eaten almost any kind of prey they were able to catch, including fish, sharks, sea birds and even other mosasaurs, according to the U.S. National Park Service. These mosasaurs were apex predators and could be compared to modern orcas, while other mosasaur species were more specialized feeders and adapted to eat shellfish, like modern sea otters, Live Science previously reported.

Occasionally, mosasaur fossils were preserved with their stomach contents intact, which helps paleontologists learn more about their hunting strategies. For example, paleontologists in Canada uncovered a specimen from the species Mosasaurus missouriensis with large fish bones inside it, according to National Geographic. The fish was larger than the mosasaur's head, and the placement of the bones suggested the mosasaur had devoured its prey piece by piece.

In another fossil find, a juvenile Mosasaurus was found in the stomach of another mosasaur species, Prognathodon kianda. The fossil, from the Smithsonian National Museum of Natural History (NMNH), demonstrates that even the largest mosasaur species could be preyed upon. In fact, Mosasaurus hoffmanni fossils have been uncovered with severely broken and healed jaws that indicate they led a violent or dangerous lifestyle, according to a 1995 study published in the journal Philosophical Transactions of the Royal Society B.

Mosasaurus probably hunted in fairly deep waters, but would not have traveled too far from the shore, according to the NMNH.

Mosasaurs may have started out swimming through the water like a snake or an eel, but mosasaur tails changed over time. The animals evolved to have a shark-like tail to propel themselves through the water. They may also have been capable of a powerful breaststroke, using their paddle-like forelimbs to assist in sudden bursts of speed to catch prey.

HOW ACCURATE WAS “JURASSIC WORLD” MOSASAUR? 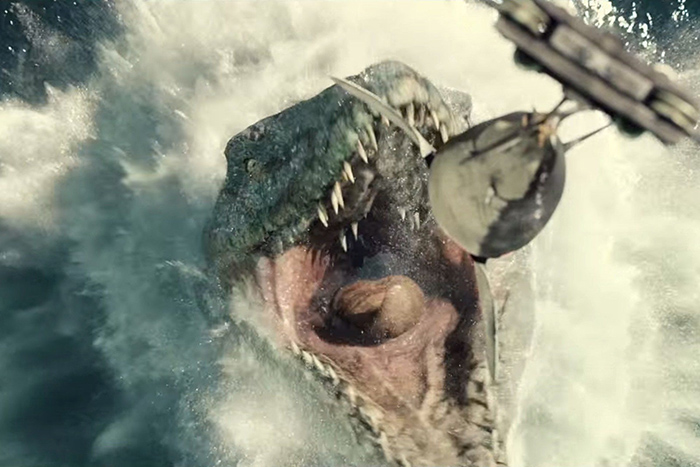 The movie "Jurassic World" (2015) features an iconic shot of a giant Mosasaurus rocketing out of the water to snatch a dangling shark. This big-screen depiction of the ancient sea monster made several other appearances in the "Jurassic World" series, but experts didn't consider the depiction scientifically accurate.

The real Mosasaurus species were simply not that big, paleontologists told Live Science shortly after "Jurassic World" was released in 2015. The creature in the film is about twice the size of the largest known mosasaur fossil, according to ReBecca Hunt-Foster, a paleontologist at the Bureau of Land Management Canyon Country District, and John Foster, the director of the Museum of Moab.

Kenneth Lacovara, then a professor of paleontology and geology at Drexel University, also acknowledged the marine reptile was too large but gave the film "kudos" for including an accurate depiction of the mosasaur's palatal teeth — a specialized second set of teeth in the animal's upper mouth, similar to those in some snakes and lizards that hold prey in place and prevent its escape.

According to Philip J. Currie Dinosaur Museum, the movie mosasaur's movement is also inaccurate, based on a dated interpretation of Mosasaurus swimming like eels or snakes.

WHAT HAPPENED TO MOSASAURS?

The mosasaurs disappeared from the fossil record alongside non-avian dinosaurs 65.5 million years ago, after a giant asteroid crashed into Earth at the end of the Cretaceous period. The rich marine ecosystems that mosasaurs inhabited and depended upon for food collapsed after the asteroid strike, according to a 2005 study in the Netherlands Journal of Geosciences. This collapse caused all mosasaurs to die out, never to return.

The role of dominant ocean predator was once held by marine reptiles that resembled modern dolphins, known as ichthyosaurs. Those animals were succeeded by the plesiosaurs, which were then replaced by the mosasaurs, according to the Naranjo Museum of Natural History. After mosasaurs disappeared, crocodilians increased in numbers and took over the role of large marine predators, according to the Netherlands Journal of Geosciences study.

A new species of alvarezsaurid dinosaur that...

It's hard to believe that there ever were...

Scientists from China, United States and...

The Dinosaurs Among Us

There is something really primordial about...

Jurassic World Evolution Review: Even Rougher Than Before