A slab of sandstone discovered at NASA's Goddard Space Flight Center contains at least 70 mammal and dinosaur tracks from more than 100 million years ago, according to a new paper published Jan. 31 in the journal Scientific Reports. The find provides a rare glimpse of mammals and dinosaurs interacting.

The tracks were discovered by Ray Stanford—a local dinosaur track expert whose wife, Sheila, works at Goddard. After dropping off Sheila at work one day in 2012, Stanford spotted an intriguing rock outcropping behind Shelia's building on a hillside. Stanford parked his car, investigated, and found a 12-inch-wide dinosaur track on the exposed rock. Excavation revealed that the slab was the size of a dining room table and examination in the ensuing years found that it was covered in preserved tracks.

The remarkable Goddard specimen, about 8 feet by 3 feet in size, is imprinted with nearly 70 tracks from eight species, including squirrel-sized mammals and tank-sized dinosaurs. Analysis suggests that all of the tracks were likely made within a few days of each other at a location that might have been the edge of a wetland, and could even capture the footprints of predator and prey.

"The concentration of mammal tracks on this site is orders of magnitude higher than any other site in the world," said Martin Lockley, paleontologist with the University of Colorado, Denver, a co-author on the new paper. Lockley began studying footprints in the 1980s, and was one of the first to do so. "I don't think I've ever seen a slab this size, which is a couple of square meters, where you have over 70 footprints of so many different types. This is the mother lode of Cretaceous mammal tracks." 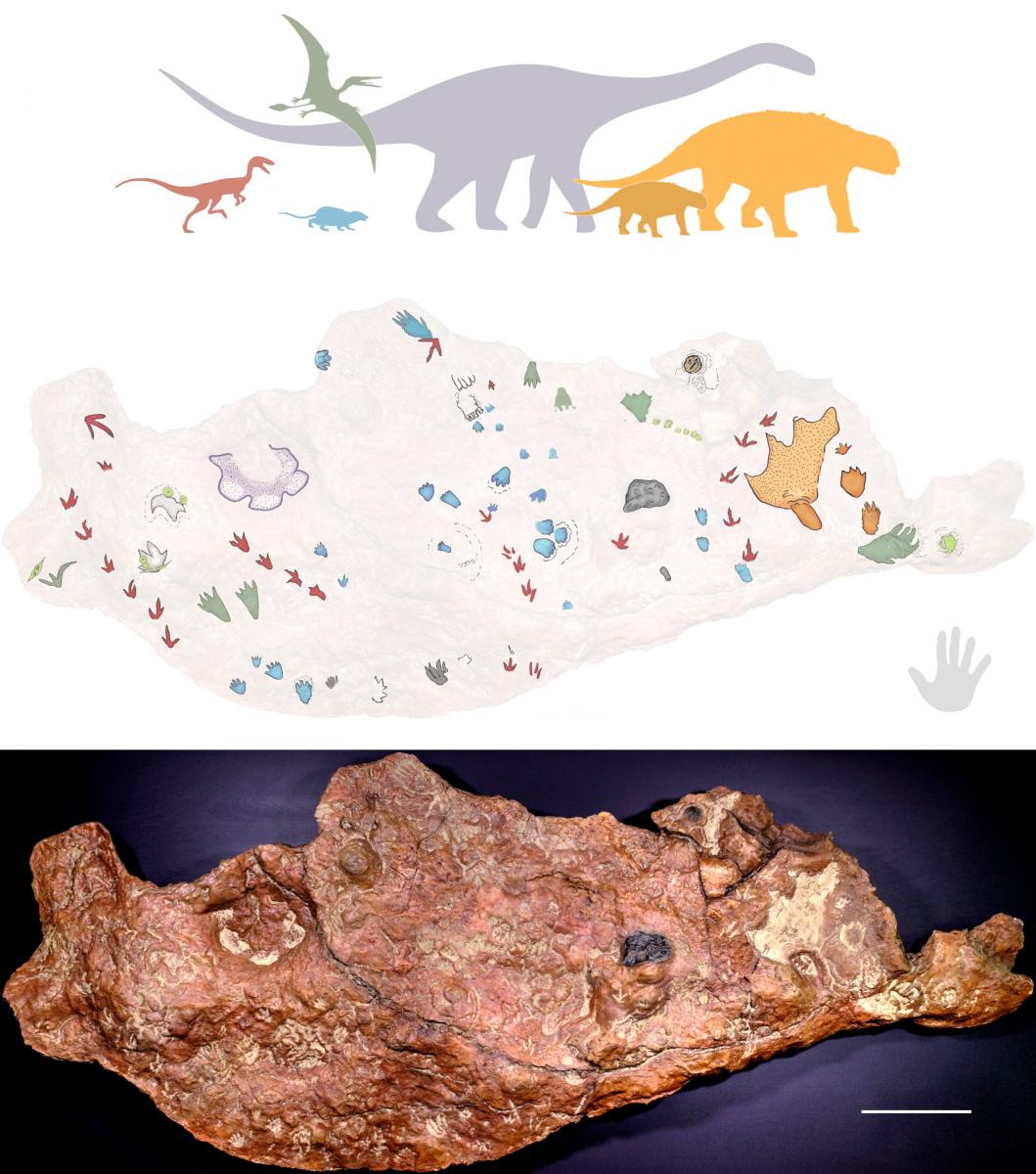 After Stanford's initial find, Stephen J. Godfrey, curator of paleontology at the Calvert Marine Museum, coordinated the excavation of the slab and produced the mold and cast that formed the basis of the scientific work.

The first track Stanford found was of a nodosaur—"think of them as a four-footed tank," Stanford said. Subsequent examination revealed a baby nodosaur print beside and within the adult print, likely indicating that they were traveling together. The other dinosaur tracks include: a sauropod, or long-necked plant-eater; small theropods, crow-sized carnivorous dinosaurs closely related to the Velociraptor and Tyrannosaurus rex; and pterosaurs, a group of flying reptiles that included pterodactyls.

"It's a time machine," Stanford said. "We can look across a few days of activity of these animals and we can picture it. We see the interaction of how they pass in relation to each other. This enables us to look deeply into ancient times on Earth. It's just tremendously exciting."

The dinosaur tracks are impressive, but it is the collection of mammal tracks that make the slab significant. At least 26 mammal tracks have been identified on the slab since the 2012 discovery—making it one of two known sites in the world with such a concentration of prints. Furthermore, the slab also contains the largest mammal track ever discovered from the Cretaceous. It is about four inches square, or the size of a raccoon's prints.

Lockley and Stanford said most of these ancient footprints belong to what we would consider small mammals—animals the size of squirrels or prairie dogs. Most Cretaceous mammals discovered to date have been the size of rodents, their size usually determined only from their teeth. "When you have only teeth, you have no idea what the animals looked like or how they behaved," Lockley said.

Lockley and Stanford believe the wide diversity and number of tracks show many of the animals were in the area actively feeding at the same time. Perhaps the mammals were feeding on worms and grubs, the small carnivorous dinosaurs were after the mammals, and the pterosaurs could have been hunting both the mammals and the small dinosaurs.

The parallel trackway patterns made by four crow-sized carnivorous dinosaurs suggests they were hunting or foraging as a group. "It looks as if they were making a sweep across the area," Lockley said.

Several of the mammal tracks occur in pairs, representing hind feet. "It looks as if these squirrel-sized animals paused to sit on their haunches," Lockley said. The team gave the new formal scientific name of Sederipes goddardensis, meaning sitting traces from Goddard Space Flight Center, to this unusual configuration of tracks.

"We do not see overlapping tracks—overlapping tracks would occur if multiple tracks were made over a longer period while the sand was wet," said Compton Tucker, a Goddard Earth scientist who helped with the excavation, coordinated bringing in multiple scientists to study the tracks, and has worked to create a display of the cast in Goddard's Earth science building. "People ask me, 'Why were all these tracks in Maryland?' I reply that Maryland has always been a desirable place to live."

What is now Maryland would have been a much hotter, swampier place in the Cretaceous, when sea levels would have been hundreds of feet higher than today. As scientists continue to study the slab and compare the tracks to others found in the area and around the world, they will continue to discover more about prehistoric life that existed here.

"This could be the key to understanding some of the smaller finds from the area, so it brings everything together," Lockley said. "This is the Cretaceous equivalent of the Rosetta stone."