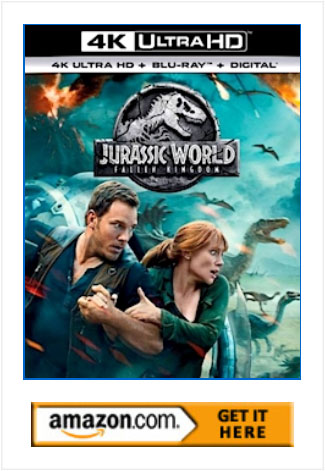 Right up front, the important thing to know about Jurassic World: Fallen Kingdom is that it’s ridiculous. The plot is paper thin, recycling aspects of virtually every film in the series that’s come before it. In its defense, though, it doesn’t try to be more than it is, it gets straight to the point in squeezing suspense out of its contrived situations, and it sets up the franchise to become something new and potentially more interesting.

When the abandoned Jurassic World theme part is threatened by an impending volcanic eruption, Claire (Bryce Dallas Howard) and Owen (Chris Pratt) are reunited by John Hammond’s former partner, Benjamin Lockwood (James Cromwell), who has initiated a plan to save the remaining dinosaurs there from extinction. But upon returning to the island and capturing Blue and other specimens, they’re betrayed by Lockwood’s men, who have an alternate plan to sell the dinosaurs to the highest bidder for their value in pharmaceutical research and weapons manufacturing. So Claire and Owen must find a way to stop this, with only an idealistic young scientist, a nervous computer genius, and Lockwood’s granddaughter to help them. The supporting cast includes notables Toby Jones and Ted Levine. Jeff Goldblum and B.D. Wong also reprise their roles from the original Jurassic Park for a few scenes each.

Jurassic World: Fallen Kingdom was shot digitally in the ARRIRAW codec (at 6.5 and 3.4K) using ARRI Alexa cameras and Panavision spherical lenses. It appears the film was finished as a 2K digital intermediate at the 2.39:1 theatrical aspect ratio, but the higher resolution capture does make a difference. Other than a little bit of aliasing that’s visible from time to time, overall detail is impressive in the upsampled image, with nice texturing and very subtle film granularity that’s soft and lovely without reducing clarity. The cinematography both is dramatic and atmospheric, with strong contrasts and rich natural coloring. High dynamic range is available in both Dolby Vision and HDR10, each of which deepens shadows and brights alike, though the brightest areas of the frame are never eye-reactive. The film’s color palette is rich and naturalistic, but also greatly enhanced by the wider color gamut.

Audio options begin with a lossless, object-based English DTS:X mix of near reference quality. The soundstage is huge across the front and vertically too, thanks to oft-active height channels. Chapter 8 is a particular sonic standout, as Isla Nubar’s volcano blows and a stampede of fleeing dinosaurs races past the main characters, all of them eventually plunging into the sea. Low end is firm and robust, yet clarity of dialogue is never sacrificed. The score is presented in good fidelity, and surround movement is smooth, constant, and highly immersive. Additional audio options include Spanish and French 7.1 DTS-HD Master Audio, with subtitles available in those languages as well as English SDH.

In a welcome touch, the actual 4K disc includes significant extras, among them (all in 1080p HD):

The material is glossy to be sure, but also mostly entertaining. The informational content isn’t especially revealing, but producers Steven Spielberg and Colin Trevorrow offer a few interesting comments, as does director Bayona. You do get a little bit of depth in the VFX Evolved and Fallen Kingdom: The Conversation pieces. On the whole, though, this material is really just a chance to see the cast and crew having fun on set, with Pratt and Howard in particular cracking jokes and being charming. A Song for the Kingdom is cute too, it should be said. Naturally, you also get a Blu-ray copy of the film in 1080p HD and the same extras, along with a Movies Anywhere Digital code. There are also paper inserts that promote the Jurassic World: Evolution video game, as well as an Interactive Baby Blueaugmented reality (AR) option for the Facebook Messenger app.

If you’re fan of this franchise, Jurassic World: Fallen Kingdom is worth adding to your video library... and 4K Ultra HD is obviously the best way to do that. The film delivers a few good Saturday afternoon dino-jump scares, is mildly amusing, and sets up a potentially interesting finale… if it is a finale, because it’s hard to imagine Universal and Amblin not revisiting these dinosaurs for years to come.