Jurassic Park: 10 Differences Between The Book & The Movie | Paleontology World

Jurassic Park: 10 Differences Between The Book & The Movie

No movie franchise does dinosaurs better than Jurassic Park. The series has made billions of dollars worldwide, and continues to be successful with the ongoing Jurassic World saga. All of these films owe everything to the late Michael Crichton, who released the novel Jurassic Park in 1990. While the franchise has surpassed the novel in both scope and magnitude, elements from Crichton’s opus can still be seen in the most recent installments.

For the most part, Jurassic Park the movie sticks closely to the source material, with a number of noteworthy differences, 10 of which are mentioned below. 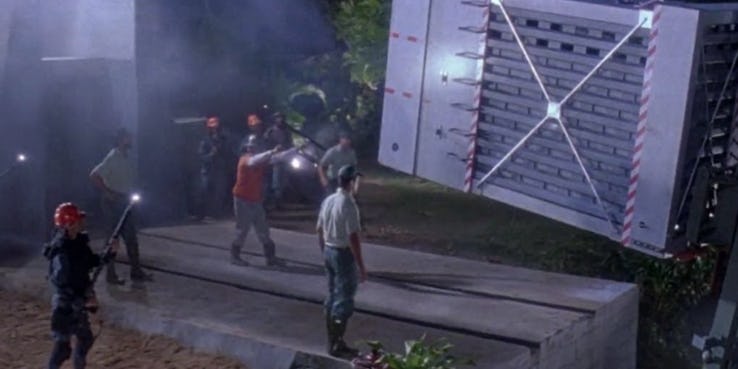 No one who has seen Jurassic Park would ever forget the pulse-pounding mayhem of the opening scene. When a velociraptor turns on its handlers, game warden Robert Muldoon watches helplessly as one of his co-workers gets eaten alive. The novel’s beginning takes place on Costa Rica, rather than Isla Nublar, where members of a clinic admit an injured InGen employee that was dropped off by a helicopter. The staff is told the patent, who is described as a teenager of Latin-American decent, was injured in a construction accident, even though his injuries resemble that of a vicious mauling. The boy ends up dying from his injuries, but not before attempting to tell his caretakers that he was attacked by a raptor.

Unlike the movie, which hits the ground running with the first dinosaur attack, the novel spends a considerable amount of time ruminating on the ensuing chain reaction of events springing from the InGen employee’s death. After a scene that was identical to the beginning of The Lost World, were a wealthy couple's daughter is attacked by a pack of small dinosaurs, a group of scientists attempt to determine the identity of the creature responsible.

After discovering one of the little buggers hanging out of the mouth of a howler monkey, an investigation begins in a New York laboratory to determine if the creature is a new species of lizard. But when Dr. Alan Grant is given a Xeroxed image, he identifies it as a Procompsognathus (or compy for short).

Grant and Sattler’s budding romance is a minor plot point in the movie, but it helped to make the characters feel grounded and life like. Their novelized counterparts are similar, though not identical. The book depicts their relationship as strictly professional, without an ounce of romantic affection.

Other than some insight into the two characters' professional and academic backgrounds, neither of them are developed beyond their initial introduction. This is typical of Crichton, who mostly used his characters as vessels to tell his stories. While Grant and Sattler weren’t particularly deep in the movie either, it could be argued that the film counterpart’s had more of a personality and were overall more likable. Oh, and Grant likes kids in the novel, unlike in the movie. 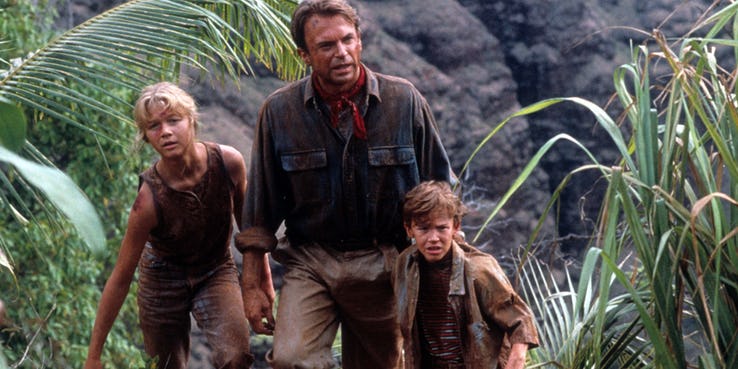 It’s become a trope in the Jurassic Park films to include children, for no other reason other than to put them into deadly situations that they wouldn’t survive in real life. This began in the novel, where the grandchildren of John Hammond, Lex and Tim Murphy enter the park and immediately put in peril. In the novel, it is Tim, not Lex, who is the older and brainier of the two.

As evidenced by early storyboards, Tim would have been older in the movie too, but a casting issue caused the siblings to have their personalities swapped. Generally speaking, Tim’s personality in the movie is much better than Lex’s in the book. The book depicts Lex as a whiny brat who we wish would get eaten by a T-Rex, which wouldn’t have worked for a character we’re supposed to care about.

Jurassic Park’s film adaptation is best remembered for the remarkable dinosaur designs that revolutionized special effects for the next two decades. The novel’s descriptions, of course, are dependant solely on the reader's imagination, though Crichton does give us some tools to help us formulate a mental image. In this case, the colors of the dinosaurs in the book are more vivid, with more stripes and spots.

The Velociraptor, for example, is described as being “dark yellow with brown stripes, like a tiger.” The compy from earlier also sported brown stripes, against its green skin tone. The Dilophosaurus’ (aka those spitty things with the neck ruffles) are said to be yellow with black spots, and the Tyrannosaurus’ are described as being rust colored. While it could be argued that the dinosaurs in the movie were more realistic and consistent looking, it cannot be denied that the book had a wider color gamut.

In both the book and the movie, Jurassic Park owes everything to John Hammond, the eccentric mind behind InGen and their biotechnical advancements. In the movie, Richard Attenborough portrays Hammond as visionary who manages to put his personal endeavors aside to help Grant, Sattler and his grandkids escape the park.

The novel’s Hammond, however, is so blinded by his own ambitions that he completely ignores the catastrophe his park has become. Whether its due to ineptitude, arrogance, or simply pure evil, Hammond ends up becoming the de facto human villain in the book, and the biggest obstacle standing in the way of the characters. Thankfully, in an act of poetic justice, Hammod gets eaten alive by the compies, before he could cause any more damage.

In addition to John Hammond, other characters who met their fate in the book ended up surviving in the movie, and vice versa. For instance, both Muldoon and Hammond’s lawyer Donald Gennaro both survive the events of the book. On the other hand, alongside Ray Arnold and Dennis Nerdy, Henry Wu (played by B.D. Wong in the films) also ends up as dino chow.

But perhaps the biggest character death is that of Ian Malcolm, who succumbs to injuries he sustained during his run in with a T-Rex. Considering that Jeff Goldblum’s performance as Malcolm has become a favorite among fans and movie buffs alike, we’re glad Steven Spielberg kept him alive to stammer another day. 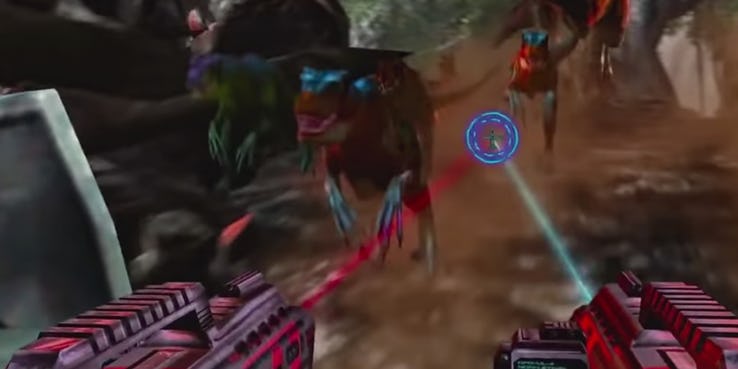 Between the two versions, the novel Jurassic Park features the most violent, bloodiest deaths. Had the movie been a straight adaptation of Crichton’s text, it would’ve easily gotten an R rating. But humans aren’t the only ones who meet gruesome fates, as the dinosaurs also get their due.

Rather than simply try to evade the dinosaurs, the characters in the novel go full postal on their scaly adversaries. Along with shooting them, Muldoon manages to blast several raptors to kingdom come with a bazooka before running out of ammo. It’s safe to say that in this case, the arcade light gun shooter adaptation was closer to Crichton’s original vision.

Need any more proof that Crichton really hated dinosaurs? Look no further than the conclusion to the novel, where Alan Grant feeds a pack of velociraptors poisoned eggs. While stuck in a dinosaur hatchery with a group of hungry raptors, Grant comes up with the genius idea of injecting poison into unhatched eggs and using them as both a distraction and a weapon. It’s a clever, if not sadistic, idea that unfortunately didn’t make it into the movie. Let’s hope it shows up in a future film installment.

Where’s the movie left open the possibility for a sequel, the novel was determined to put an end to bioengineered dinosaurs for good. After the survivors escape from Isla Nublar in the book, the Costa Rican air force bombs the island with napalm, presumably roasting every dinosaur to a crisp. If it sounds like a sequel would be impossible after such an extinction-level event, it’s because a sequel was initially not intended. Up until this point in his career, Crichton had never written a sequel to any of his books, and intended to do the same with Jurassic Park.

It wasn’t until Steven Spilburg convinced him to write a sequel that The Lost Worldlater came to fruition, forcing Crichton to retcon much of the original ending in order to bring back formally deceased characters. It would be another 25 years before Crichton’s vision would finally come to screen, when Isla Nublar was blown to bits in Jurassic World: Fallen Kingdom, though by a volcano instead of napalm.