The family of a man who bought a 15ft tall dinosaur for their garden have said they are in shock to find they do not have insurance after their house was badly damaged in a fire.

Insurance payments stopped when Jerry Adams' bank account was closed shortly after he died at the end of August.

Mr Adams, from Cwmbran, made headlines earlier this year when he bought the model dinosaur for his garden.

The community is rallying round to help the family try and rebuild their home.

Mr Adams' widow Lesley, his daughter Becky and her partner John and their three children, Michael, 14, Thomas, 10, and nine-year-old Dylan, were all in the house when the fire broke out on Sunday morning.

The family was alerted to the fire by Thomas, who smelt smoke coming into his bedroom.

Becky, said: "I was having a lie-in and John ran in and was saying 'get out, get out, the house is on fire'.

"I grabbed my kids and my mum grabbed a picture of my dad. I wanted to cry.

"So we all ran outside, the fire brigade got in and they just started ripping walls down, they brought the hoses up and just started soaking everything.

"Honestly, I don't care. My kids are alive. I don't care if they've got nothing for Christmas. I've got a roof over my head and they're safe." 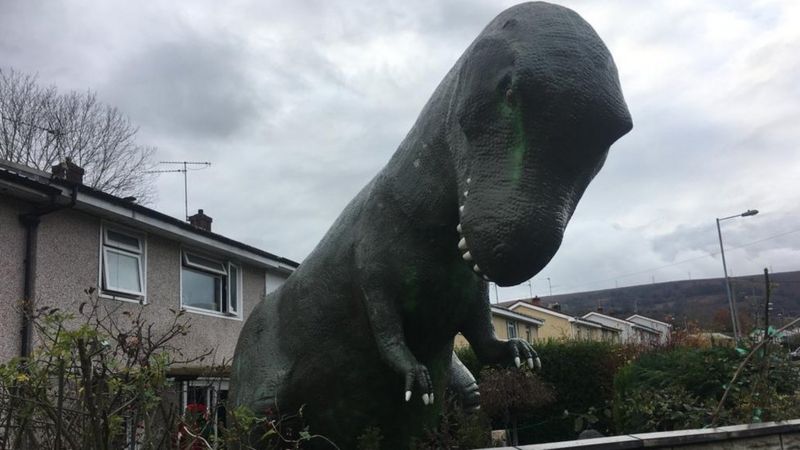 Samantha said she believed the community had helped so much because of her father's memory.

"I'll never leave a legacy like my dad," she said.

"This just proves that people care, people from the community, people I don't even know have come forward and offered their help, offered their support.

"My dad was a good guy, he brought Alun the dinosaur here, he's been raising money for different charities.

"It just shows how much of an impact he had."

An online fundraising page has also been started to help the family.

A fossil nest found in China shows that coloured...

When I read Michael Crichton’s famous ...

Dinosaurs Get Their Close-Ups In These Stunning Photos

THE LAST OF the dinosaurs died off 65...

Could Modern Humans Survive an Asteroid Impact, Like What Killed the Dinosaurs?

We know that an enormous meteorite hit the Gulf of...

If the doomsday asteroid that hit the earth was 30 seconds late, we wouldn't have Jurassic Park movies. Here's what else would happen...

Named Eomonachus belegaerensis, the marine creature was around 2.5 m (8.2 feet) in length and has a...

Chinese researchers have found a peculiar fossil plant with leaves and fruits of different morphologies dating back about 125 million...

TRT World talks to Serdar Mayda, paleontologist, about the Mastodon remains that were recently unearthed in Canakkale’s Ezine district...

A new re-examination of fossil material housed in the Sedgwick Museum of Cambridge and the Booth Museum at Brighton has revealed the...

Male or Female Dinosaur? It's Not Easy to Tell Them Apart

Paleontologists seek the secrets of dinosaur sexes. They're making progress figuring out how male and female dinosaurs differed....

Jurassic World Evolution: Complete Edition on Switch is a Must-Buy for Park-Building Fans