Paleontologists in China have identified a new species of microraptorine dromaeosaur closely related to the famous dinosaur Velociraptor.

The newly-discovered dinosaur lived during the Cretaceous period, approximately 120 million years ago.

Named Wulong bohaiensis, the species was larger than a common crow but smaller than a raven.

It had a narrow face filled with sharp teeth and a long, bony tail which would have doubled its length.

Wulong bohaiensis was covered with feathers, including a wing-like array on both its arms and legs and two long plumes at the end of its tail.

The dinosaur is one of the earliest relatives of Velociraptor, the famous dromaeosaurid theropod that lived some 75 million years ago.

“The new dinosaur fits in with an incredible radiation of feathered, winged animals that are closely related to the origin of birds,” said Dr. Ashley Poust, a postdoctoral researcher at the San Diego Natural History Museum.

“Studying specimens like this not only shows us the sometimes-surprising paths that ancient life has taken, but also allows us to test ideas about how important bird characteristics, including flight, arose in the distant past.” 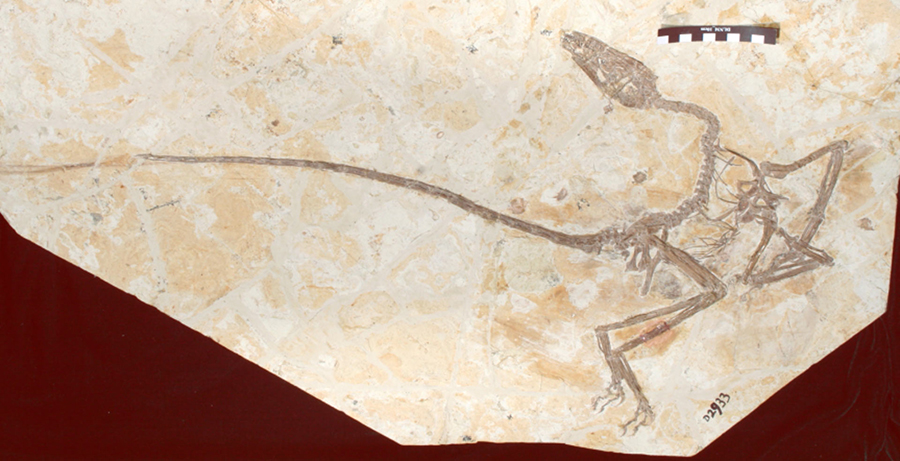 The skeleton of Wulong bohaiensis was recovered from the Jiufotang Formation in China more than a decade ago by a local farmer.

“The specimen has feathers on its limbs and tail that we associate with adult birds, but it had other features that made us think it was a juvenile,” Dr. Poust said.

Dr. Poust and colleagues analyzed the dinosaur’s bones and found that this individual was a juvenile.

“This means that at least some dinosaurs were getting very mature looking feathers well before they were done growing,” they said.

“Birds grow up very fast and often don’t get their adult plumage until well after they are full sized.”

“Showy feathers, especially those used for mating, are particularly delayed. And yet here was an immature dinosaur with two long feathers extending beyond the tip of the tail.”

A paper on the discovery of Wulong bohaiensis was published The Anatomical Record.