Kronosaurus: The Sea Giant of Australia 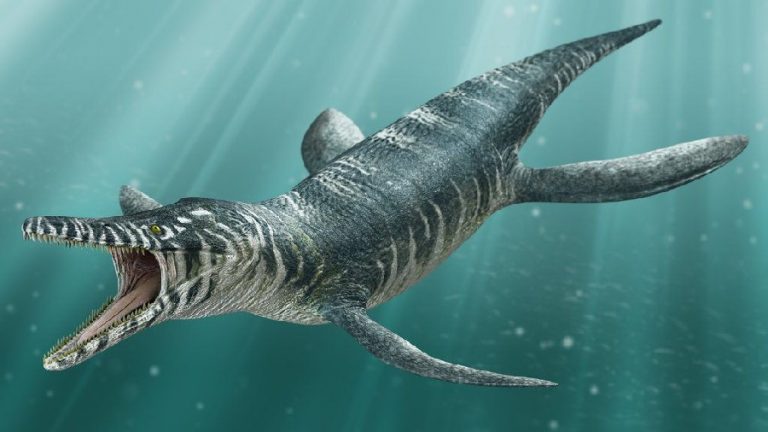 Kronosaurus (meaning “lizard of Kronos”) is a genus of short-necked pliosaur. With an estimated length of 9–10.5 metres (30–34 ft), it was among the largest pliosaurs, and is named after the leader of the Greek Titans, Cronus. It lived in the Early Cretaceous Period (Aptian-Albian). Fossil material has been recovered from Queensland in Australia, and from the Paja Formation in Boyacá, Colombia, and assigned to two species.

Like other pliosaurs, Kronosaurus was a marine reptile. It had an elongated head, a short neck, a stiff body propelled by four flippers, and a relatively short tail. The posterior flippers were larger than the anterior. Kronosaurus was carnivorous, and had many long, sharp, conical teeth. A feature of the genus Kronosaurus is the first three maxillary teeth are enlarged to fangs. Current estimates put Kronosaurus at around 9–10.5 meters (30–34 feet) in length. In 2009, K. queenslandicus was estimated to weigh up to 11,000 kilograms (11 metric tons).

Body-length estimates, largely based on the 1959 Harvard reconstruction, had previously put the total length of Kronosauru sat 12.8 meters (42 feet). However, more recent studies, comparing fossil specimens of Kronosaurus to other pliosaurs suggests that the Harvard reconstruction may have included too many vertebrae, exaggerating the previous estimate, with the true length probably only 9–10.5 meters (30–34 feet).

Fossil stomach contents from Northern Queensland show that Kronosaurus preyed on turtles and plesiosaurs. Fossil remains of giant squid have been found in the same area as Kronosaurus; it may have fed on them, but no direct evidence for this exists.

Large, round bite-marks have been found on the skull of an Albian-age Australian elasmosaurid (Eromangasaurus) that could be from a Kronosaurus attack.

Kronosaurus is known from Australia and Colombia. Both areas were covered by shallow inland seas when Kronosaurus inhabited them.

How To Sell Dinosaurs In Jurassic World Evolution

There are thousands of dinosaur-loving...

Study Sheds New Light on the Behaviour of Spinosaurus

Twenty-five years ago, a discovery heralded...

Never before has there been more dire a need...

A new dinosaur theme park in Portugal has...