Volcano vs Dinosaurs: A Geological Review of the ‘Jurassic World’ Trailer | Paleontology World

Volcano vs Dinosaurs: A Geological Review of the ‘Jurassic World’ Trailer

The new trailer for the upcoming latest chapter of the successful Jurassic Park franchise, with the title Jurassic World: Fallen Kingdom, reveals what seems to be some basics of the plot. Years after the dream of an adventure park featuring real, cloned dinosaurs, failed again, the survivors go back to the island, where something survived. Other than in the original novel, there was never an attempt to eradicate the loose dinosaurs, so they proliferated over time. This is a biological impossibility, as such a small island could never host so many different dinosaur species, especially predators.

Supposedly a rescue mission is organized to save some samples or animals from the abandoned park, as the island is doomed by an impending volcanic eruption. In the novel, it’s mentioned that the park uses geothermal energy to power itself, so building a park on an active volcano was supposedly part of the plan. Also, geologically active areas are far more interesting, featuring a complex landscape with mountains and rivers, so that may have been advantageous for marketing the park. Geological stable areas, like deserts, tend to be smoothed by erosion and thereby far less appealing to our senses.

After the crew arrives, the situation quickly escalates and Owen Grady, actor Chris Pratt’s character in the movie, soon has to run not only from the dinosaurs but also a volcanic eruption. One scene shows a dark cloud rushing down from an exploding mountain, likely a pyroclastic flow. Grady, together with various dinosaurs, manages to stay ahead of the flow and probably also survives.

Pyroclastic flows (also pyroclastic density currents, or PCDs) are avalanches of hot gases, volcanic ash, and boulders, traveling at a speed exceeding in most cases 50 miles per hour. The fastest, professional sprinter can reach 30 miles per hour, but only over a short distance.

It’s impossible to escape a pyroclastic flow if you’re standing or running in its path. Indeed PCDs are among the most lethal volcanic phenomena. A series of pyroclastic flows during the eruption of Mount Pelée in 1902 killed estimated 20,000-40,000 people. Only three survivors were reported. The young shoemaker Léon Compère-Léandre (1874-1936) managed to escape, his home was located at the border of the city of St. Pierre, where the PCD stopped. Still, he was severely burned. As for the dinosaurs, it’s hard to give estimates for running velocity. Models, based on fossil trackways and dinosaur anatomy, suggest that some, agile species (* there are some unidentified, small dinosaurs seen in the trailer) reached 50 miles per hour. Still barely enough to outrun a PCD under perfect conditions, like plain terrain. 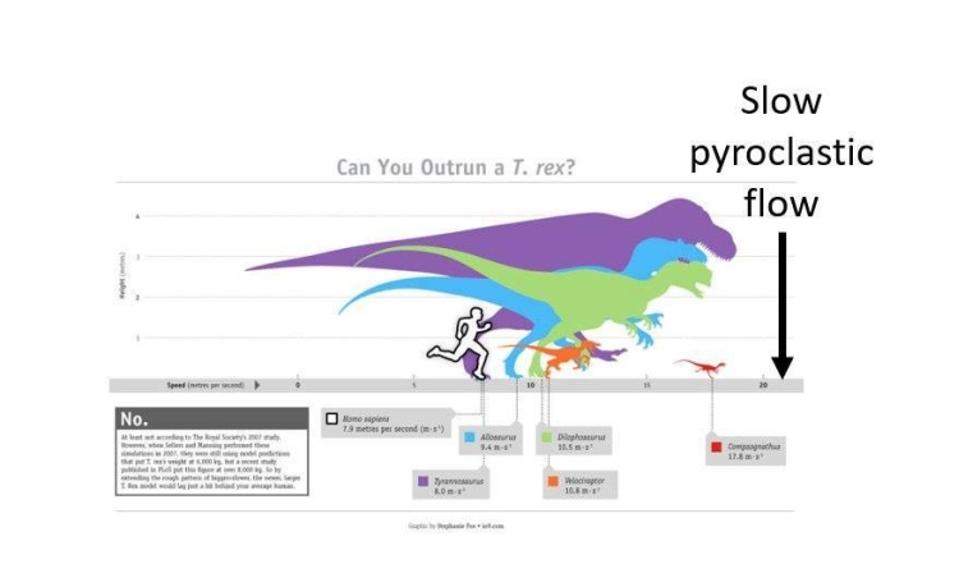 PCDs can travel vast distances, up to 50 miles from the volcano’s crater. From the eruption that destroyed Pompeii in 79 AD, we know that PCDs are lethal up to six miles from the volcano. The heat is so intense that it instantly burns the outer layers of skin and flesh. A body will shrink due to the loss of water by vaporization, squeezing the inner organs out from the body cavities. Even if not hit directly by the pyroclastic flow, as seen in the trailer, inhaling the still hot gases would burn Grady’s lungs, drowning our hero with his own fluids.

It’s curious to note, that a prehistoric reptile, even if not dinosaur, killed by a PCD is known from the fossil record. Discovered in 1931 by  Gualtiero Adami, an engineer and employee at an Italian Natural History Museum, near the village of Piné (Dolomites), the fossil is today hosted in the museum of the Geological Institute of Padua. The “Tridentinosaurus antiquus” was described by paleontologist Piero Leonardi in 1959, recognizing it’s significance as a vertebrate in peculiar preservation conditions. The skeletal remains are surrounded by a carbonaceous patina and the oldest body fossil found in the Alps, dated to 200 million years. It was suggested by some authors, based on the preservation of the fossil, that the animal was killed during a volcanic eruption, by a pyroclastic flow. 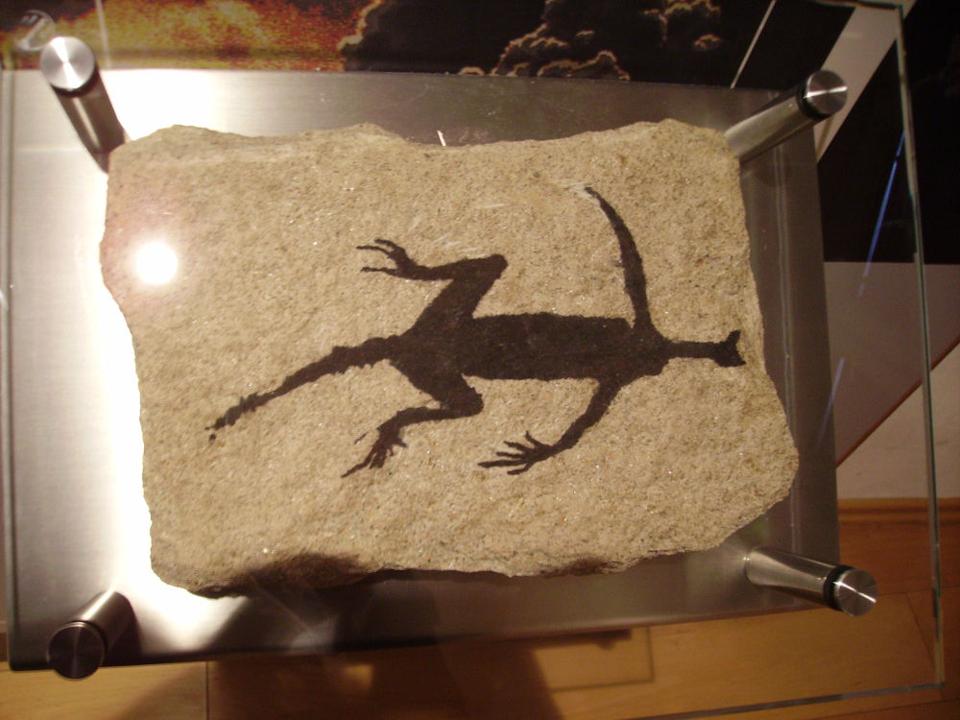