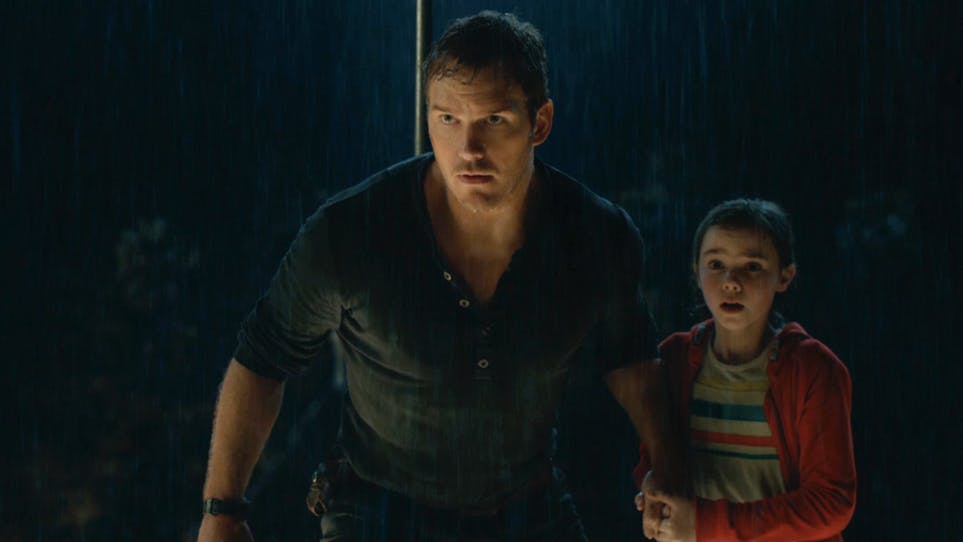 Fandor reviews the latest movie from the theme park that wouldn't quit.

Where to start with the mess that is Jurassic World: Fallen Kingdom?

How does one enjoy a film when the main component to keeping the plot moving is the characters (good and bad) making increasingly dumb decisions? Sure, Jurassic World: Fallen Kingdom is a spectacle-driven summer blockbuster, but do we really need to suspend our disbelief so far as to believe that the main antagonist is dumb enough to pry teeth out of the mouths of tranquilized dinosaurs for a necklace he’s making? With this in mind, is it really a spoiler to say that his decisions ultimately lead to his own gruesome death?

But I'm jumping ahead.

The events of the movie are put into motion when our heroes are hired to conduct a mission to retrieve a selection of dinosaurs before a volcano explodes on Isla Nublar. However, the people who tasked Owen (Chris Pratt) and Claire (Bryce Dallas Howard) with this mission have no interest in really saving the dinosaurs. Instead they intend to auction off the dinosaurs to the highest bidders, and to use the well-trained and compliant velociraptor, Blue, to create a highly intelligent militaristic “Indomraptor” — part Indominus Rex from Jurassic World and part Blue.

Yet, in spite of the poor script, J.A. Bayona’s direction, as well as the visual effects and cinematography, are the best of the series since the original Steven Spielberg-directed Jurassic Park. There’s a moment in the film that recalls the iconic shot from the first movie, of when audiences and Dr. Alan Grant first laid eyes on a brontosaurus. They, (and audiences) were awe-struck. We knew we were watching something new and fantastic. Bayona purposefully subverts this moment by showing a brontosaurus meeting a tragic end when a volcano destroys Isla Nublar. Like the characters in Fallen Kingdom, I found myself getting choked up.

Then the preposterous writing of Colin Trevorrow (director of the first Jurassic World) and his co-writer, Derek Connelly, broke the spell and reminded me how asinine the script and plot are. The film attempts to do for the franchise what The Last Jedi did for Star Wars. It attempts to cast off the tropes of the past movies and shift the franchise towards a more ambiguous and open future — not one just driven by corporate-mandated nostalgia. Because of this, Jurassic World: Fallen Kingdom has significantly more interesting ideas than its predecessor.

Nonetheless, in his writing Treverrow never fully commits to these concepts, and thus, the film feels half-baked. For every gothic horror influenced scare Bayona and his cinematographer, Oscar Faura, conjure up, especially as the Indomraptor silently hunts the heroes and villains in the Lockwood Estate, the haphazard script betrays the film at every turn with laughable dialogue and underdeveloped ideas. In fact, the film ends on such a ludicrous note, it’s impossible to conceive what exactly is going to happen next — and you know what? I don’t really care.

The final nail in the coffin comes in the form of a late “twist” — can I call something a “twist” if it’s straight up absurd? — that is meant to point to the dangers of cloning (which is essentially the message of all the prior films), but really only serves as the shallow set-up for future entries into the series. Speaking of which, after the climax, the audience is left with no clue as to where the series is going. If this was the intention of Treverrow and Bayona then okay, sure, they succeeded.

Jurassic World: Fallen Kingdom has removed all the awe, all the fear, and all the wonder that Spielberg accomplished twenty-five years ago with Jurassic Park. It’s hard to make dinosaurs boring, yet the latest in this franchise has managed just that.