Children’s imaginations are limitless and sometimes we need adults to interpret them.

Dougal Dixon, a renowned Scottish palaeontologist and author whose works inspired Peter Jackson’s King Kong, was on hand to bring some of the roaring dinosaurs sketched by pupils to life.

Alongside their works of art, the children described what inspired their dinosaurs, with Dixon deciding if they would have been able to exist millions of years ago.

Here’s how it went down.

What Molly, eight, said: “She’s a friendly, helpful herbivore that loves to help other species to get food so they don’t starve. She’s light-footed and graceful and always looks her best.”

What Dixon said: “Comoticeratops is one of the horned dinosaurs. A denizen of arid uplands, its blue colouration helps it to blend in with the mountain mists. It is a large animal, bigger than the mountain trees on which it feeds. However, it is very exposed, and vulnerable to vulture-like pterosaurs of the high crags.”

The verdict: Comotriceratops would have fitted in with the other horned dinosaurs.

What Riley, seven, said: “Two-O-Saurus eats other little dinosaurs and is bad. He has fights with other big dinosaurs to guard his home – that’s why he has big claws and teeth. He has a very loud roar to scare off dinosaurs and his curly tail can hit them and scratch them.”

What Dixon said: “Two-O-Saurus has two heads! This has actually happened, not really on a dinosaur but on Hyphalosaurus – a water reptile that lived in China in early Cretaceous times, alongside the dinosaurs. We have one fossil of this. It did not live long, as the fossil is of a baby.”

The verdict: The Two-O-Saurus could have existed but faced a difficult time. As Dixon put it: “Two-O-Saurus, being a theropod, would probably have killed its prey all right, but then would have difficulty in deciding which head would eat it.” 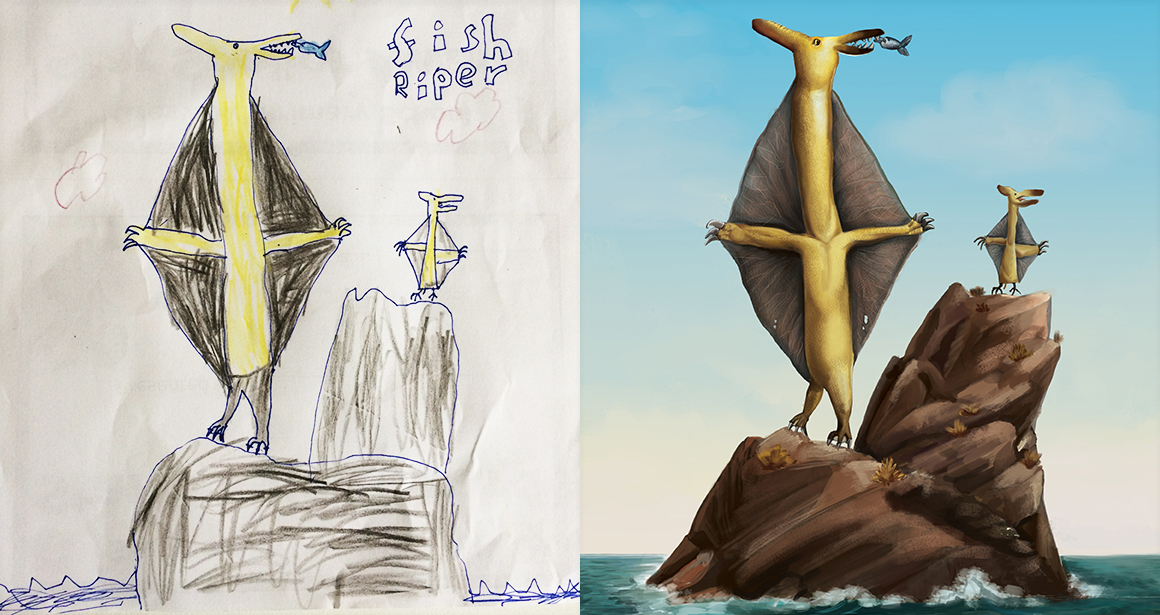 Oliver, aged, eight: “Once in dinosaur times, the Fish Ripper ruled the sea. It ripped big and little fish out of the sea. It lived around Jurassic times and ate a lot of fish every day. It has rough scales and teaches the younger ones to fly and catch their fish.”

What Dixon said: “Fish Ripper is a pterosaur, but one that has lost its powers of flight. We have that nowadays – there are plenty of birds that have lost their flying abilities and are perfectly well adapted to life on the ground, or in the water. In the Fish Ripper, the wing membranes are much reduced and form a flat fin-like structure along the neck and the body.”

The verdict: The Fish Ripper definitely could have ruled the sea… the shallow part anyway.

What Flynn, aged five, said: “The little dinosaurs live on Flynnosaurus and he keeps them safe from big bad dinosaurs. He has lots of colour to make him look friendly so other little birds and creatures will like him more. He can bash down trees with his big tail and will get bigger from eating more plants.”

What Dixon said: “The Flynnosaurus builds its own armour. It is a slow-moving plant-eater, related to the ankylosaurs – the armoured dinosaurs. However, unlike its heavy relatives it never developed the armoured plates. The soft skin of its back is very attractive to parasites – especially the tiny moth-like pterosaurs and little theropod-like lizards. These are in turn preyed upon by large beetles.”

The verdict: The ankylosaurus-inspired dinosaur’s big teeth may help him chomp through trees but the Flynnosaurus may not fare so well in a fight.

What Dixon said: “It looks as though the Polyosurussunyus Bananashaurus is more of a crab/giraffe instead of a dinosaur! It lives on land and is disguised as a dinosaur to keep predators away. A long spine on one side of the shell looks like a head and neck, and a long spine on the other looks like a tail.”

The verdict: Dixon says that due to the location that the Polyosurussunyus lives in, finding a fossil would be near impossible.

The drawings were made as part of a promotional campaign put together by GreatBeanBags.com