The space object, which wiped out 75% of all species including the dinosaurs, hit the worst possible place on the planet and - according to new research - at the most lethal angle.

Investigations at the crater site, together with computer simulations, suggest the impactor dug into the crust at an inclination of up to 60 degrees.

This exacerbated the climatic fallout.

We know that the target rocks, in what is now the Gulf of Mexico, contained huge volumes of sulphur from the mineral gypsum. When this material was thrown high into the atmosphere and mixed with water vapour, it produced a "global winter".

And the angle of attack ensured this environmental crisis was intense and prolonged.

"At 45 to 60 degrees, the impact is very efficient at vaporising and ejecting debris to high altitude. If the impact happens at shallower or much steeper angles, the amount of material that's put into the atmosphere that can then have climate-changing effects is significantly less," explained Prof Gareth Collins from Imperial College London.

"It's evident that the nature of the location where this event happened, together with the impact angle, made for a perfect storm," he told BBC News.

The majority of plant and animal life on Earth succumbed to the the challenging conditions.

Prof Collins' and colleagues' work is published in the journal Nature Communications. 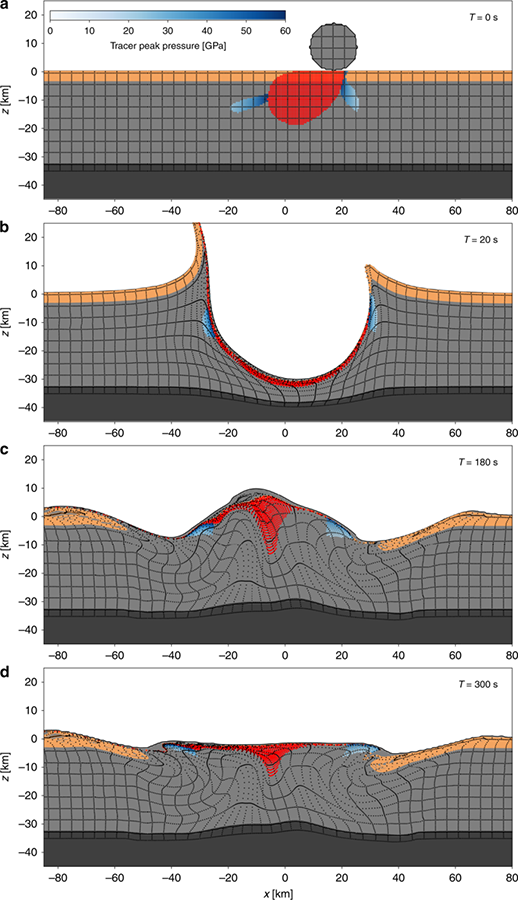 Prof Collins is part of an international team that's been studying the anatomy of the crater associated with the calamitous asteroid strike.

Today, this 200km-wide structure is positioned under Mexico's Yucatan Peninsula, with its best preserved central portions sitting just offshore of the port of Chicxulub.

It's hard to grasp the scale of the forces that produced it.

The impactor, thought to be about 12km in diameter, punched an instantaneous hole in the crust that was probably some 30km deep. As fluidised rocks at the base of this bowl rebounded, they created in just a few minutes a mountain that was higher than Everest. This didn't last, however, and it fell back, to leave a prominent inner ring of hills, or peaks.

What's interesting from Prof Collins' perspective is the asymmetry that was frozen into the Chicxulub structure.

For example, if you look at the centres of the crater, of its peak ring and of the uplifted rock that underlies the crust in Earth's mantle - these points do not map directly on top of each other. They're actually aligned in a northeast-southwest direction, with the crater centre in between the centres of mantle uplift and peak-ring formation.

This is a vital clue in determining not only the direction from which the asteroid arrived but the angle at which it hit the planet.

The Imperial researcher ran a number of simulations on the UK Science and Technology Facilities Council (STFC) DiRAC High Performance Computing Facility. The only way he can reproduce the geometry is by having the asteroid come in from the northeast and strike the Earth at an angle of roughly 60 degrees.

Prof Collins said: "If you run the model at different impact angles, at 30 degrees and at 45 degrees, say, you can't match the observations - you get centres of mantle uplift and of the peak ring on the downrange side of the crater centre. And for a straight overhead impact, at 90 degrees, the centres are all on top of each other. So, that's doesn't match the observations, either."

Imperial colleague and co-author Prof Joanna Morgan added: "Knowing the direction of impact means we now know which part of the target site was subjected to the greatest shock pressures.

"The sulphur-bearing and carbon-bearing sedimentary rocks actually thicken as you go from east to west, and to the south. So this result means we're degassing more of those sediments than we would if you just took an average value for their thickness."

And Prof Sean Gulick from the University of Texas at Austin, US, told BBC News: "This new modelling provides a clear answer to the angle of the impact and the direction of the impact that largely settles a long-standing debate on what was downrange of the impact.

"Also critical is that a 60-degree angle is in the range of the worst options for injecting large volumes of vaporised and ejected sulphur-rich rocks into the atmosphere.

"Thus these results are critical for understanding potential 'kill mechanisms'," the co-author explained.

Gulick and Morgan led the expedition that drilled into the Chicxulub Crater in 2016 to recover some of its rocks for an analysis. A follow-up, high-resolution seismic survey is due to take place late this summer that will provide an enhanced 3D view of the structure.

The impact that changed life on Earth

A new genus and species of palaeoscolecid...

Sauropods: Triumph of the Titans

Jurassic World Evolution: The Most Important Buildings To Upgrade First

If you're looking to run the best park...

The 200 million-year-old specimen is only...

11 of the Worst Dinosaur Movies

Can you imagine how difficult that must be,...