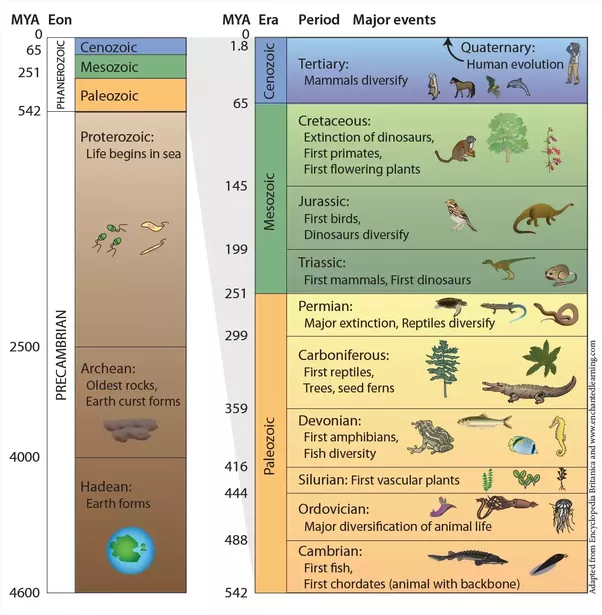 1) The geological time scale (GTS) is a system of chronological measurement that relates stratigraphy to time, and is used by geologists, paleontologists, and other Earth scientists to describe the timing and relationships between events that have occurred throughout Earth’s history.

2) Evidence from radiometric dating indicates that Earth is about 4.54 billion years old. The geology or deep time of Earth’s past has been organized into various units according to events which took place in each period.

3) Different spans of time on the GTS are usually delimited by changes in the composition of strata which correspond to them, indicating major geological or paleontological events, such as mass extinctions. For example, the boundary between the Cretaceous period and the Paleogene period is defined by the Cretaceous–Paleogene extinction event, which marked the demise of the non-avian dinosaurs and many other groups of life. Older time spans which predate the reliable fossil record (before the Proterozoic Eon) are defined by the absolute age.

4) The first serious attempts to formulate a geological time scale that could be applied anywhere on Earth were made in the late 18th century. The most influential of those early attempts (championed by Abraham Werner, among others) divided the rocks of Earth’s crust into four types: Primary, Secondary, Tertiary, and Quaternary.

5) The first geologic time scale that included absolute dates was published in 1913 by the British geologist Arthur Holmes.

7) The largest defined unit of time is the supereon, composed of eons. Eons are divided into eras, which are in turn divided into periods, epochs and ages. The terms “eonothem“, “erathem“, “system“, “series“, and “stage” are used to refer to the layers of rock that correspond to these periods of geologic time in Earth’s history.

8) Geologists qualify these units as “early“, “mid“, and “late” when referring to time, and “lower“, “middle“, and “upper” when referring to the corresponding rocks. For example, the lower Jurassic Series in chronostratigraphy corresponds to the early Jurassic Epoch in geochronology. The adjectives are capitalized when the subdivision is formally recognized, and lower case when not; thus “early Miocene” but “Early Jurassic.”

10) The Carboniferous is often treated in North America as two geological periods, the earlier Mississippian and the later Pennsylvanian.