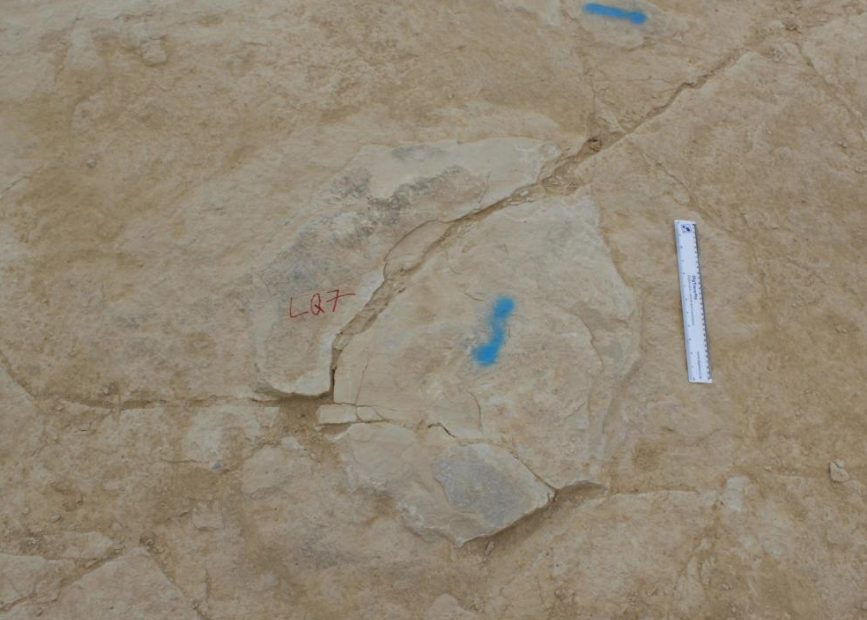 A SET of dinosaur footprints have been discovered in a Brit quarry.

The stunned workers came across around 30 different impressions that are believed to have come from a herd of gigantic sauropods as they roamed across the landscape in Swanage, Dorset on Britian’s Jurassic Coast.

Amazingly, this was the site of a similar discovery of 52 dino prints back in 1997.

They are believed to be around 140million years old.

Sauropods, the first successful group of herbivorous, could live as long as 120 years and were believed to reside along Britain’s south coast from the late Triassic to the late Cretaceous periods.

They were the largest creatures ever to walk to the Earth.

And when a herd of the mighty beasts ambled along Britain’s coast, they would have left their footprints in the soft mud which was then covered by layers of rock for millions of years.

Professor Matthew Bennett from Bournemouth University, who guided the extraction in Purbeck stone quarry, said: “The footprints are like giant saucer-shaped depressions which are up to three foot in diameter but only half an inch deep.

“They belonged to the sauropods which were very large dinosaurs the size of double decker buses and very gregarious, travelling in groups.”

He said that now the extraction of the footprints has been completed without damaging them, they will likely be put on display at a museum.

“I’ve spent my life travelling the world to look for fossil footprints so it is nice to find some on our doorstep,” he added.

Meanwhile, the quarry had to be shut down for 10 days while the excavation took place.

David Moodie, from Lewis Quarries, said: “It became apparent that we had come across something of historical interest, so working closely with the National Trust and Professor Matthew Bennett of Bournemouth University, we were able to move forward in the best way without stopping progress in the quarry itself.”

This isn’t the first time a footprint has been found in the UK.

They belonged to gigantic long-necked sauropods and theropods – the “older cousins” of Tyrannosaurus rex.