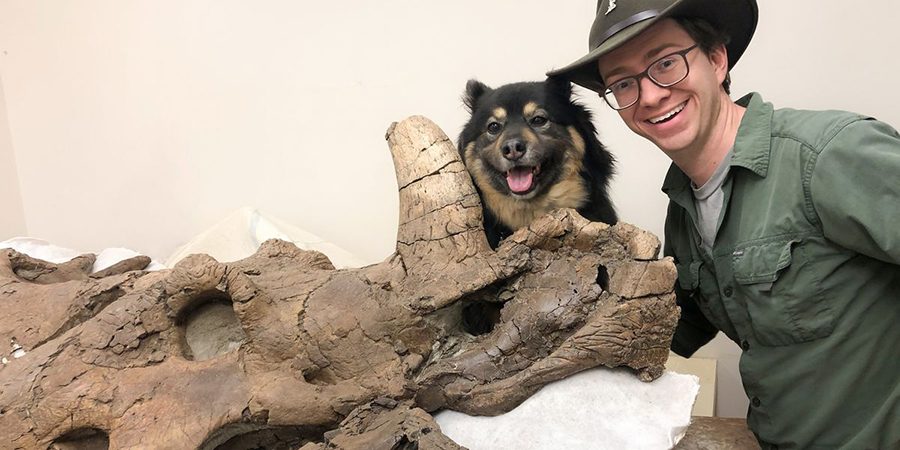 Meet the dinosaur whose facial imperfections are changing what paleontologists thought they knew about horned dinosaurs.

The dinosaur is named “Hannah” after a dog.

In the summer of 2015, College of Charleston professor Scott Persons was looking for fossils in the badlands of southern Alberta. Hiking down a ridge, he says he spotted a fossil horn poking straight out of the hillside, and he began to dig around it. The horn, bigger around than a baseball bat, was not an isolated bone. It was still connected to a huge skull.

“That’s exactly how you want to find a dinosaur,” Persons said. “If much more of the skull had been exposed on the surface, it would have started to erode away and crumble. But only the tip of Hannah’s snout horn was protruding, and the skull was otherwise beautifully preserved.”

Traditionally, because Persons discovered a particularly important dinosaur specimen, he gets to give it a nickname. “Hannah the dinosaur is named after my dog Hannah,” he says. “She’s a good dog, and I knew she was home missing me while I was away on the expedition.”

Despite the chosen nickname, paleontologists have no way of knowing if the dinosaur was female.

Four years and a whole lot of chiseling later, an international research team has published a full scientific analysis of the skull. Even by the spikey standards of Styracosaurus, experts say Hannah has a lot of horns and some are much longer than in other Styracosaurus specimens.

“The skull shows how much morphological variability there was in the genus,” expert on horned dinosaurs and member of the research team Robert Holmes says. What is more, Hannah’s horns are apparently not symmetrical. The horns on Hannah’s left side are nearly all larger than those on Hannah’s right side. Researchers say they are still not sure why this is.

Hannah’s left side also shows evidence of an injury. “It looks like Hannah suffered from some kind of old wound or infection, or both,” Persons says. “Something happened to the left side of the face, probably when Hannah was young and the skull was still growing. It wasn’t lethal, Hannah lived through it, but afterward, the skull bones grew in a strange way.”

The right and left differences are so extreme that, had the paleontologists found only isolated bits of the right and bits of the left, they might have concluded that they belong to two different species. According to the research team’s findings, just published in the peer-reviewed scientific journal Cretaceous Research, this is one of the major lessons learned from Hannah’s skull. Like the branching prongs in the antlers of modern deer and moose, the pattern of horns in dinosaurs could be variable within a species.

As a result, experts say some of the horned dinosaur species that were once assumed unique will have to be reevaluated.

In China at a Copper Mine Discovered Dinosaur Footprints

Large areas of rocks with dinosaur...

Scientists believe they have settled a...