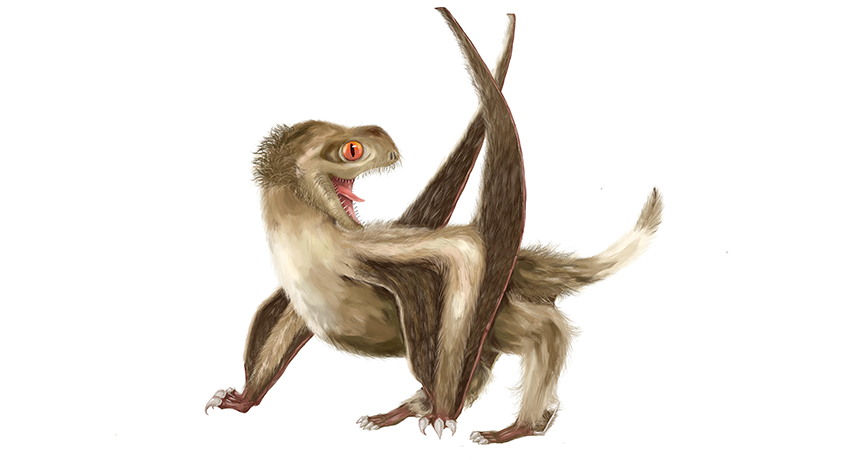 Pterosaurs were not dinosaurs. These prehistoric flying reptiles belonged to a family all their own. But scientists now report that pterosaurs (TAIR-oh-sors) and dinosaurs shared one important trait. Both had protofeathers.

The dinosaurs in Jurassic World may be as smooth as any modern-day lizard, but real dinos would have looked much different. Many were covered in protofeathers. These are the forerunners of the feathers found on birds today.

Paleontologists had long known that pterosaurs were as fuzzy as kittens. In 1831, paleontologist Georg August Goldfuss wrote about a pterosaur with fibers on its body. He likened them to hair. Experts called them pycnofibers [PICK-no-fy-burs] and thought they differed from protofeathers.

Michael Benton is a paleontologist at the University of Bristol in England. He and his colleagues have just examined fossils from two pterosaurs found in the Daohugou region of northern China. Both were small, about the size of a brown bat. They had lived some 165 million years ago, during the Jurassic period.

Fuzz was clearly visible on both fossils. But to learn more, the scientists turned to a scanning electron microscope. Its beams of electrons produce very-high resolution images. These turned up different fuzz types. Chemical analyses revealed that wisps of the fuzz contained microscopic structures related to color. They would have made the pterosaurs reddish brown.

Different types of fiber-like fluff covered various parts of both pterosaurs. Single filaments covered the head, neck and shoulders, for example. Parts of the arms and tail had brush-like bundles of fuzz. These reptiles even hosted what appear to be whiskers. That could have helped them sense insects and other small prey. These also look just like filaments found on dinosaurs.

Benton and his colleagues described their new findings December 17, 2018 in Nature Ecology & Evolution.

On the evolutionary path to feathers

Elizabeth Martin-Silverstone is a pterosaur expert who works at the University of Southampton in England. She was not involved in the new study. “Looking at these structures, they really look like protofeathers,” she says.

Many dinosaurs have been found with protofeathers. The new findings indicate that the fuzz found on many pterosaur fossils is much the same. In fact, it’s structure is the same as dino protofeathers. If both dinosaurs and pterosaurs had protofeathers, the common ancestor of both groups probably did, too. “That would push the origin of protofeathers to well over 200 million years ago,” Benton says. That’s more than 40 million years earlier than previously thought.

Then, of course, they’ll need to get the moviemakers on board.

A new species of alvarezsaurid dinosaur that...

It's hard to believe that there ever were...

Scientists from China, United States and...

The Dinosaurs Among Us

There is something really primordial about...

Jurassic World Evolution Review: Even Rougher Than Before