‘Spying on Whales’ Dives Into the Story of True Leviathans 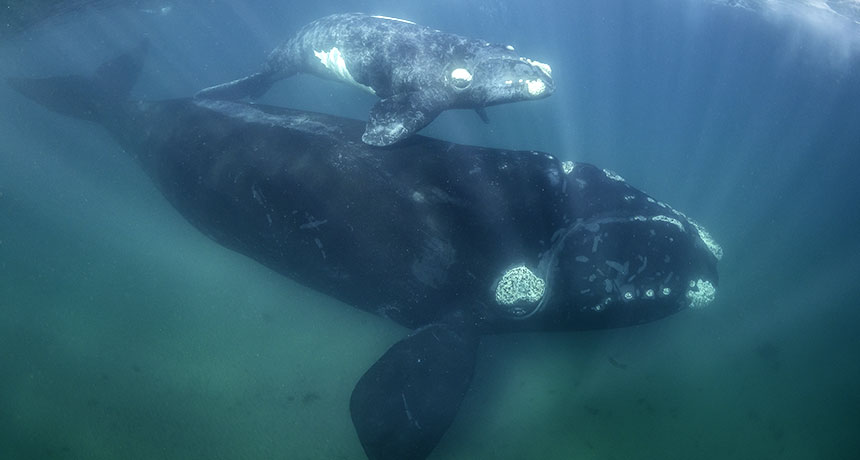 A new book journeys through cetaceans’ past, present and future.

Just before humans evolved, whales and dolphins were, pound for pound, the brainiest creatures on Earth. Another cetacean superlative: Today’s biggest whales are heftier than the largest dinosaurs that ever lived. The evolutionary trends that produced big, brainy marine animals are just a few of the fascinating tales told in Spying on Whales.

Paleontologist Nick Pyenson studies whale fossils, but he’s also been known to cut up a few modern-day carcasses. As laid out in his new science-book-cum-midcareer-memoir, the anatomical info gained from both endeavors provides strong evidence for evolution in action. That process has transformed cetaceans’ dog-sized, four-legged ancestors, which returned to the water around 50 million years ago, into today’s seafaring behemoths. Pyenson’s research hasn’t been all lab work, though: His field studies have taken him from whaling stations in Iceland to a site in South America’s Atacama Desert where ancient whales repeatedly washed ashore.

Blue whales are about 10,000 times as massive as their landlubber ancestors, Pyenson notes. One evolutionary innovation that enabled the immensity of blue whales and some of their close kin is baleen, the flexible sheets of fingernail-like keratin that hang by the hundreds from the roofs of these creatures’ toothless mouths. Using these frayed and overlapping sheets, baleen whales filter immeasurable numbers of tiny prey from mouthfuls of water the volume of a large living room.

For some baleen whale species, another undoubted asset is the sensory organ that Pyenson and colleagues discovered in the “chins” of fin whales, among others. That nerve-rich glob of goo helps the whales sense dense clouds of prey and better recognize the position of their own jaws as they open and close their mouths.

When Pyenson looks to whales’ future, there’s mixed news. Most countries have phased out commercial whaling, but collisions with ships still threaten cetaceans’ long-term survival. On the other hand, Pyenson notes, a decline in summer sea ice in the Arctic may be allowing gray whales to stray over the pole from the North Pacific to the North Atlantic and beyond, possibly setting up new populations.

All in all, Spying on Whales is a delight to read, from the author’s descriptions of the sights, sounds and smells of the lab and field to the joys of hunting fossils, whether with his colleagues or his young son.

A rare fossil believed to be from South...

A paper published on Spetember 2018, reports...

17 of the Coolest Dinosaur Toys for Kids of all Ages

It’s time to get shopping. If you’re looking...

'Jurassic World: Dominion' Delayed By A Whole Year To 2022

It’s a bit unorthodox, reaching out to those...