Why Did Birds Survive Extinction While Dinosaurs Died Out? | Paleontology World

Why Did Birds Survive Extinction While Dinosaurs Died Out?

That beautiful singing bird on your fence is a descendent of dinosaurs. As all dinosaurs have gone extinct, what allowed the birds to adapt and survive? New research published in Science Advances points to a special feature of birds’ brains that could explain why they are still with us today.

Bird origins have been traced to a mostly meat-eating group of two-legged dinosaurs known as theropods (“beast-footed”) that lived about 231 million years ago in the Triassic Period. The mighty Tyrannosaurus rex also belonged to that group. Theropods and modern birds share a few traits in common, such as feathers and the ability to lay eggs. Of course, one big difference is flight, which is the defining characteristic of birds.

“Birds are living dinosaurs, just as we are mammals,” explained the study’s co-author paleontologist Julia Clarke of the University of Texas at Austin in a 2020 interview. “They’re firmly nested in that one part of the dinosaur tree,” she stated. “All of the species of birds we have today are descendants of one lineage of dinosaur: the theropod dinosaurs.”

Most birds are much smaller than dinosaurs, so researchers believe that a process of miniaturization started to take place about 200 million years ago. As discussed in Scientific American, coelurosaurs — the subgroup of theropods that resulted in modern birds — began getting smaller and smaller due to an intense evolutionary process that favored smaller animals rather than larger ones. 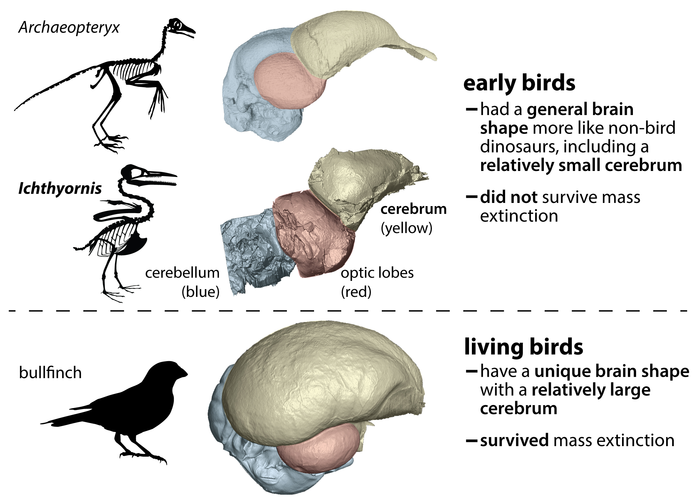 In the current study, a fossil from about 70 million years ago may help explain the survival of birds. The fossil is a nearly complete skull belonging to a bird named Ichthyornis, which lived in the late Cretaceous period in what is now Kansas. Ichthyornis had characteristics resembling both birds and dinosaurs. For instance, its jaws were full of teeth, yet it had a beak. The well-preserved nature of the skull allowed scientists to compare the prehistoric bird’s brain to those of birds today.

“Living birds have brains more complex than any known animals except mammals,” said lead researcher Christopher Torres. “This new fossil finally lets us test the idea that those brains played a major role in their survival.”

The researchers used CT-imaging data to make a 3D replica of the bird’s brain, known as an endocast. This allowed them to make comparisons to endocasts of various living birds and their dinosaur ancestors.

Their research revealed that Ichthyornis‘ brain was more similar to those of dinosaurs than to those of modern birds. In particular, the cerebral hemispheres — the area of the brain responsible for higher cognitive functions like thought and emotion in humans — of Ichthyornis‘ brain were much smaller than those found in birds today.

Different brains may have helped birds survive the mass extinction that wiped out the dinosaurs. “If a feature of the brain affected survivorship, we would expect it to be present in the survivors but absent in the casualties, like Ichthyornis,” said Torres. “That’s exactly what we see here.