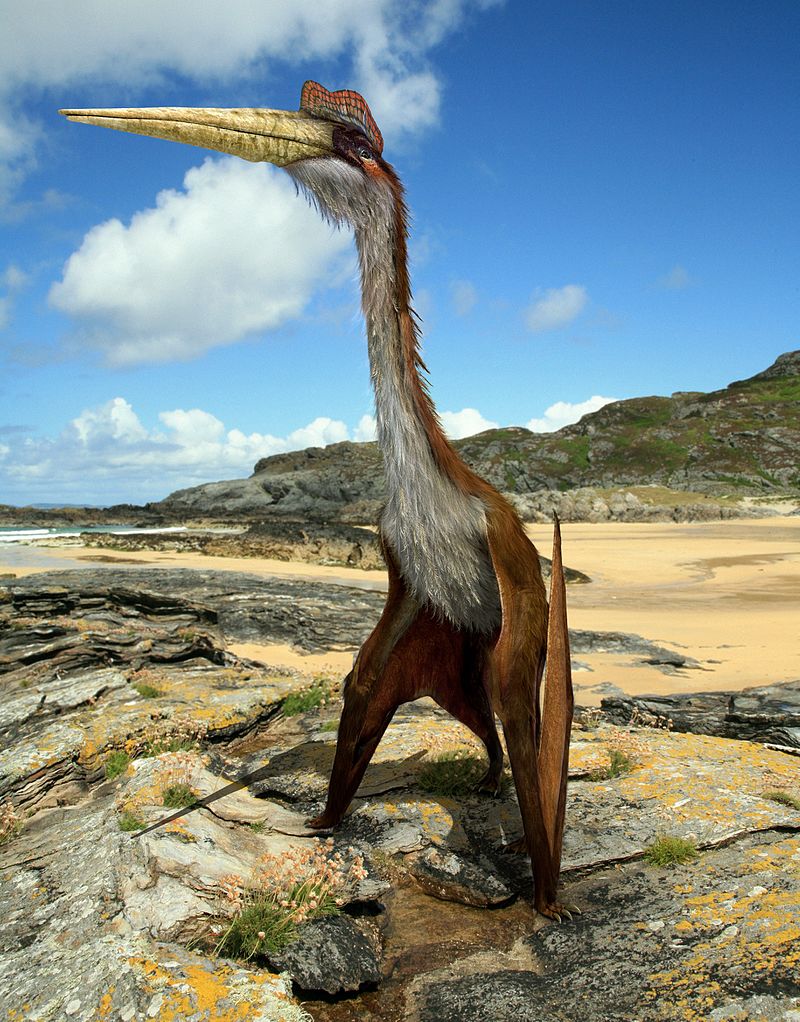 Quetzalcoatlus northropi is an azhdarchid pterosaur known from the Late Cretaceous of North America (Maastrichtian stage) and one of the largest known flying animals of all time. It is a member of the family Azhdarchidae, a family of advanced toothless pterosaurs with unusually long, stiffened necks. Its name comes from the Mesoamerican feathered serpent god, Quetzalcoatl.

When it was first named as a new species in 1975, scientists estimated that the largest Quetzalcoatlus fossils came from an individual with a wingspan as large as 15.9 meters (52 feet), choosing the middle of three extrapolations from the proportions of other pterosaurs that gave an estimate of 11, 15.5 and 21 meters, respectively (36 feet, 50.85 feet, 68.9 feet). In 1981, further advanced studies lowered these estimates to 11–12 meters (36–39 ft).

More recent estimates based on greater knowledge of azhdarchid proportions place its wingspan at 10–11 meters (33–36 ft). Remains found in Texas in 1971 indicate that this reptile had a minimum wingspan of about 11 metres.

Mass estimates for giant azhdarchids are extremely problematic because no existing species share a similar size or body plan, and in consequence, published results vary widely. Generalized height in a bipedal stance, based on its wingspan, would have been at least 3 meters (10 feet), much taller than a human.

Generalized weight, based on some studies have historically found extremely low weight estimates for Quetzalcoatlus, as low as 70 kilograms (150 lb) for a 10-meter (32-foot-10-inch) individual, a majority of estimates published since the 2000s have been higher, around 200–250 kilograms (440–550 lb).

Skull material (from smaller specimens, possibly a related species) shows that Quetzalcoatlus had a very sharp and pointed beak. That is contrary to some earlier reconstructions that showed a blunter snout, based on the inadvertent inclusion of jaw material from another pterosaur species, possibly a tapejarid or a form related to Tupuxuara. A skull crest was also present but its exact form and size are still unknown.

The first Quetzalcoatlus fossils were discovered in Texas, United States, from the Maastrichtian Javelina Formation at Big Bend National Park (dated to around 68 million years ago) in 1971 by Douglas A. Lawson, a geology graduate student from the Jackson School of Geosciences at the University of Texas at Austin. The specimen consisted of a partial wing (in pterosaurs composed of the forearms and elongated fourth finger), from an individual later estimated at over 10 m (33 ft) in wingspan.

The nature of flight in Quetzalcoatlus and other giant azhdarchids was poorly understood until serious biomechanical studies were conducted in the 21st century. One early (1984) experiment by Paul MacCready used practical aerodynamics to test the flight of Quetzalcoatlus. MacCready constructed a model flying machine or ornithopter with a simple computer functioning as an autopilot. The model successfully flew with a combination of soaring and wing flapping; however, the model was half scale based on a then-current weight estimate of around 80 kg, far lower than more modern estimates of over 200 kg. The method of flight in these pterosaurs depends largely on weight, which has been controversial, and widely differing masses have been favored by different scientists. Some researchers have suggested that these animals employed slow, soaring flight, while others have concluded that their flight was fast and dynamic.