So-called Ediacaran organisms have puzzled biologists for decades. To the untrained eye they look like fossilized plants, in tube or frond shapes up to 2 meters long. These strange life forms dominated Earth’s seas half a billion years ago, and scientists have long struggled to figure out whether they’re algae, fungi, or even an entirely different kingdom of life that failed to survive. Now, two paleontologists think they have finally established the identity of the mysterious creatures: They were animals, some of which could move around, but they were unlike any living on Earth today.

Scientists first discovered the Ediacaran organisms in 1946 in South Australia’s Ediacara Hills. To date, researchers have identified about 200 different types in ancient rocks across the world. Almost all appear to have died out by 541 million years ago, just before fossils of familiar animals like sponges and the ancestors of crabs and lobsters appeared in an event dubbed the Cambrian explosion. One reason these creatures have proved so tricky to place in the tree of life is that some of them had an anatomy unique in nature. Their bodies were made up of branched fronds with a strange fractal architecture, in which the frond subunits resembled small versions of the whole frond.

Jennifer Hoyal Cuthill at the Tokyo Institute of Technology and the University of Cambridge in the United Kingdom and Jian Han at Northwest University in Xi’an, China, have now found key evidence that the Ediacaran organisms were animals. They analyzed more than 200 fossils of a 518-million-year-old marine species named Stromatoveris psygmoglena. Paleontologists had previously concluded that the 10-centimeter-tall species was some sort of animal—in part, says Hoyal Cuthill, because it was found alongside other known animals, and all of the fossils are preserved in a similar way. Hoyal Cuthill and Han argue S. psygmoglena was also an Ediacaran organism, a rare “survivor” that somehow clung on through the Cambrian explosion.

he Stromatoveris fossils, which were all unearthed in Yunnan province in southwestern China, are beautifully preserved, Hoyal Cuthill says. As she examined specimen after specimen she became increasingly excited. “I began thinking: My goodness, I’ve seen these features before.” Like some of the strange Ediacaran organisms, Stromatoveris was made up of several radially repeated, branched fronds with a fractal internal architecture. 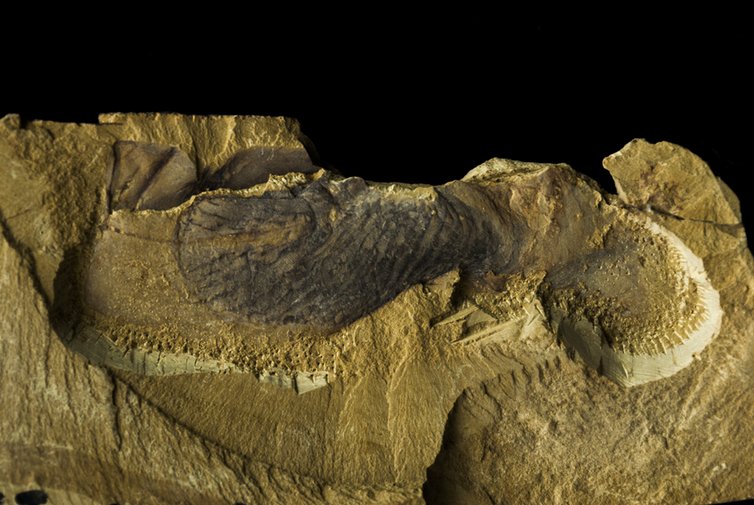 To find out what sort of animals Stromatoveris and the other Ediacaran organisms were, Hoyal Cuthill and Han ran a computer analysis that uses anatomical features to reconstruct evolutionary relationships. They found that Stromatoveris and the other Ediacaran organisms don’t belong to any living animal group or “phylum.” Instead, they cluster on their own branch in the animal evolutionary tree, between the sponges and complex animals with a digestive cavity like worms, mollusks, and vertebrates, the team reports today in Palaeontology. “This branch, the Petalonamae, could well be its own phylum, and it apparently lacks any living descendants,” Hoyal Cuthill says.

“It looks very likely [the Ediacaran organisms] are animals,” says Simon Conway Morris, a paleontologist at the University of Cambridge, who worked with Han on the first description of Stromatoveris in 2006, but who was not involved in the current study. At that point there were just a handful of known Stromatoveris fossils. The researchers argued that they were similar to some Ediacaran organisms, although others later questioned that link. Conway Morris says the new study “extends the story very nicely” by exploring the Ediacaran nature of Stromatoveris in more detail.

Geobiologist Simon Darroch at Vanderbilt University in Nashville is also comfortable with the idea that the Ediacaran organisms were animals and that a few survived into the Cambrian. But on a first look he is not convinced that Stromatoveris was one such survivor; he thinks the evidence that it had the fractal architecture of an Ediacaran organism isn’t strong—yet he’s open to persuasion.

If the new conclusion settles one mystery, though, it introduces another. The Ediacaran organisms represent the first major explosion of complex life on Earth, and they thrived for 30 million years. Their demise has been linked to the appearance of animals in the Cambrian Explosion, Hoyal Cuthill says. But that simple explanation doesn’t work as well if Ediacaran organisms were animals themselves, and some were still alive tens of millions of years later. “It’s not quite so neat anymore,” she says. “As to what led to their eventual extinction I think it’s very hard to say.”