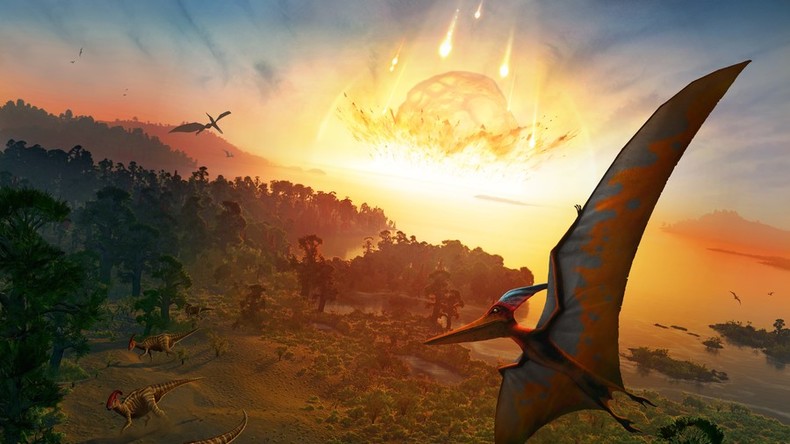 The catastrophic asteroid impact that wiped out the dinosaurs 66 million years ago may not have been so devastating had it hit almost anywhere else on earth. It means dinosaurs could still rule the earth and humans may never have evolved at all.

That’s according to new research by Japanese scientists Kunio Kaiho and Naga Oshima, who published their findings Thursday in the journal Scientific Reports. They posit the asteroid, known as the Chicxulub Impactor, which smashed into what was then a shallow sea in modern day Mexico, would not have been so devastating if it hit about 87 percent of anywhere else on the planet.

The roughly six mile (10km) wide asteroid created a crater more 110 miles (176km) across when it smashed into our planet. The collision released more energy than 1 billion atomic bomb detonations which destroyed Hiroshima and Nagasaki at the close of WW2.

More than 75 percent of all land and sea animals, the most famous of which being dinosaurs, were wiped out as a result. Huge volumes of ash, soot and dust shot into the atmosphere, blocking as much as 80 percent of precious sunlight from reaching the surface of the planet.

The pair believe the key ingredient in the extinction is the soot, which was produced when the impact ignited rocks loaded with hydrocarbon molecules such as oil. However, the amount of hydrocarbon in rocks varies widely depending on their location.

With this in mind, the team set about analysing places on Earth where the rocks have a high hydrocarbon molecule content. They found that only about 13 percent of the planet have such an environment, essentially meaning that the dinosaurs were unlucky the asteroid hit in such a hydrocarbon rich area.

“The catastrophic chain of events could only have occurred if the asteroid had hit the hydrocarbon-rich areas occupying approximately 13 percent of the Earth’s surface,” the scientists wrote in a university press release.

It’s a good thing for humanity, however, or else we may never had evolved in the first place.