9 Extinct Megafauna GIANTS That Are Out Of This World

Some of these massive beasts are familiar in form but enormous in size, while others are strange hybrids of modern-day animals.

Megafauna are simply big animals. Elephants are megafauna, as are giraffes, whales, cows, deer, tigers, and even humans. Megafauna can be found on every continent and in every country.

For every living species of megafauna, there are a large number of extinct megafauna. In the age before widespread settlement, without the pressures of human interference, animals were free to evolve into some truly awe-inspiring forms. Imagine beavers the size of bears or wild pigs larger than modern-day rhinoceroses, or even sloths as large as elephants.

Humans can be blamed for pushing many of the most recently extinct megafauna to their limits. It's generally agreed that the populations of many large animals plummeted in the first thousand years or so after humans hit a continent. Our earliest ancestors would, quite reasonably, have gone after the biggest animals they could to feed their families and kill the biggest predators to cut down on competition and attacks. Mix in human ingenuity, climatic changes, and hundreds and thousands of years and you soon get a land denuded of megafauna.

But looking farther back, past the dawn of humanity, and you'll find an even more interesting picture of megafauna. We're talking 50-foot sharks, giant otters the size of wolves, and weird beaver-turtle hybrids the size of a VW Beetle and the appetite of a cow. If we should ever perfect time travel, ecologists will be lining up for trips back to study the bizarre zoology of the past.

With that in mind, here are seven otherworldly examples of now-extinct megafauna.

Glyptodons were enormous armored mammals that became extinct around 10,000 years ago. Roughly the size of a VW Beetle, the glyptodon were well-armored against attacks from predators. A relative of modern-day armadillos, they were unable to pull their head into their shell like turtles and relied on thick skull armor and sharp spikes for defense. 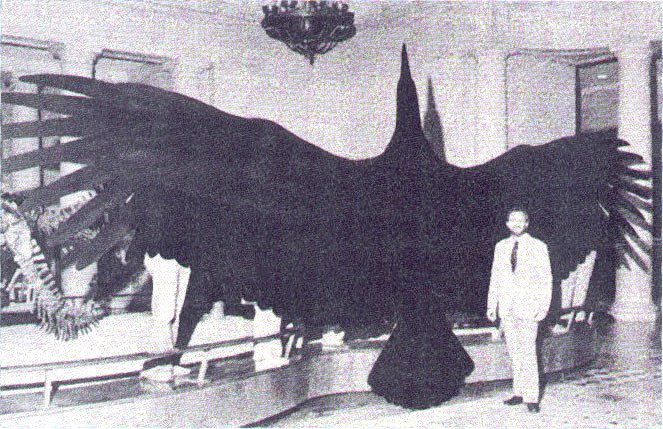 The Argentavis has the distinction of being the largest flying bird ever discovered. The massive bird could grow to be 24 feet, wingtip to wingtip, twice the size of the Andean condor, which is one of the largest birds in the world today. The Argentavis is thought to have relied on thermal currents to say aloft. The creatures' huge size would have made takeoffs more difficult, and it's likely that they made their homes in the mountains where they could use mountain slopes and headwinds to aid in launching. Though it would certainly be frightening to find yourself under a soaring Argentavis, the living wouldn't have too much to worry about — it's believed that the bird was a scavenger that preferred its meals already-killed.

The Paraceratherium were enormous beasts that lived around 25 million years ago in what is now Asia. Standing nearly 20 feet tall at the shoulder, Paraceratherium remain the largest known species of mammal to walk the Earth. Our fossil record of the Paraceratherium is relatively sparse, so it's hard to say what they looked like exactly, but the general scientific consensus is that they had long, muscular necks and heads not unlike a hornless rhinoceros. They would use their long reach to graze on tall trees.

Varanus priscus was a giant, carniverous goanna that may have grown up to 23 feet long (size estimates are still being debated) and weighed more than 4,000 pounds. This monitor lizard inhabited southern Australia during the Pleistocene and fed on other medium and large animals. It may have been venomous, and if it was, it would be the largest known venomous vertebrate.

It's fitting that this next entry follows the massive Paraceratherium because the ground sloth is one of the few land mammals that could give the Paraceratherium a run for their money. Weighing up to 9,000 pounds and stretching 20 feet in length, the ground sloth ambled around the woodlands and grasslands of South America as recently as 10,000 years ago, supporting itself by eating grasses, shrubs and leaves. The ground sloth had the misfortune of overlapping with humanity's reign and was likely hunted to extinction as we trickled down from North America.

Though the previous entries on this list were all large creatures, none of them were really anything a person would have to worry about. But not this one. Megalodon can be best thought of as a giant great white shark — a highly capable predator sitting at the top of the food web. It could grow to be more than 50 feet in length and sported teeth seven inches long. The megalodon dined on whales, dolphins, porpoises and giant sea turtles. The chart below says it all. 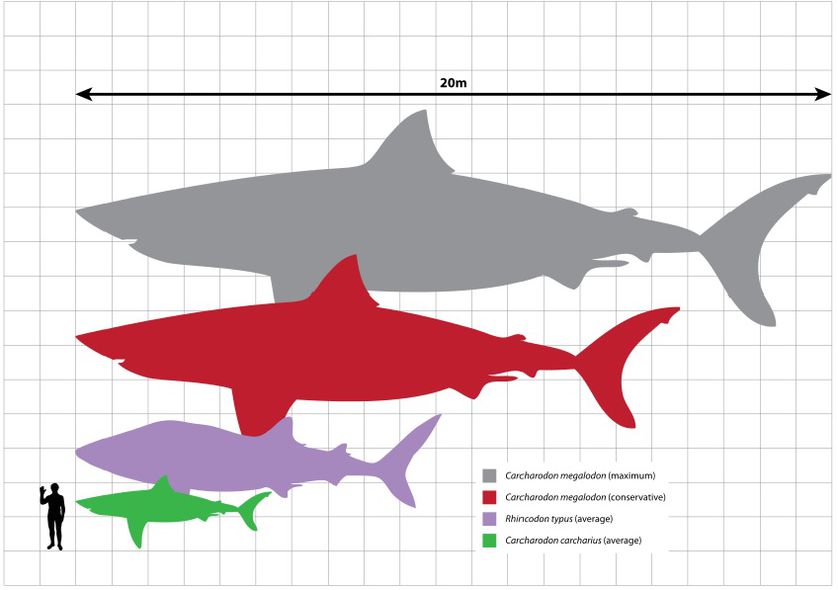 Daeodon, like Megalodon, is worthy of a healthy dose of fear. They were enormous hulking towers of brawny pig that lived around 20 million years ago in North America. They could grow to be six feet high at the shoulder and weigh thousands of pounds. Fossilized remains of their teeth suggest that they were omnivorous, dining both on animals (some as large as modern-day cows) and plants. It's telling of their dominance of the food web that they belong to a family of animals nicknamed "hell pig" and "terminator pig."

Around six million years ago, giant otters (Siamogale melilutra) the size of wolves and weighing up 110 pounds (twice the size of modern-day otters) lived in what is now Asia. Recently, American paleontologists excavating an ancient lake bed in the Yunnan Province in Southwestern China found a complete skull, jawbone and teeth. The teeth showed that the furry creatures lived on extra large shellfish and molluscs, which it cracked open with a powerful jaw.

Giant beavers, driven to extinction around 11,000 years ago, were plus-sized versions of today's furry little landscape engineers. They could grow more than eight feet in length and tip the scales at 200 pounds. Think of a beaver the size of a black bear — that's a big animal. Evidence suggests that giant beavers built lodges like modern-day beavers.