The Really Wild Show: “Dinosaurs in the Wild” Examined 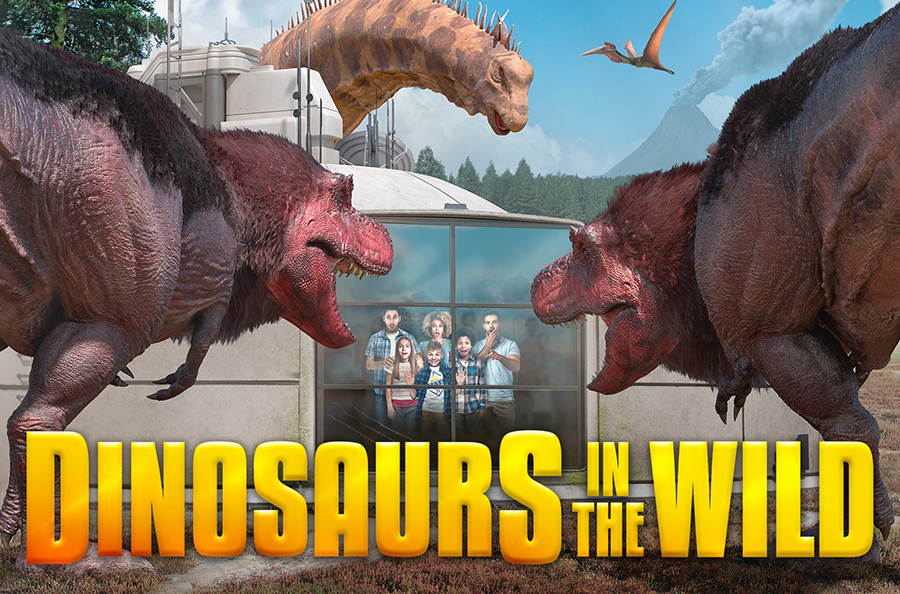 Dinosaurs in the Wild educates and entertains using life performances and 4d atmospherics, all under a Neptunus structure…

The Jurassic Park series taught us – five times and counting – that resurrecting the prehistoric master species is somewhat ill-advised.

Dinosaurs in the Wild caters for the same inate fascination, this time away from the comfort of your living room.

Billed as ‘the greatest safari ever’, the multi sensory experience from the team behind the BBC’s award-winning Walking with Dinosaurs and ITV drama Primeval, is also designed to be scientifically accurate, and informative.

Visitors are transported back 67 million years with the help of dramatic storytelling, high-tech animation and 3D audio-visual effects.

Producer Bob Deere told Access: “We set out to build a unique event where you could truly experience that time seeing it with your own eyes. So we created an exciting story where time travel has been invented, and a TimeBase dinosaur research station has been built on the Cretaceous plains 67 million years ago.

“When people come to the show they step into this wonderful science fiction story. But everything to do with the dinosaurs they see is based

on the latest science. Our scientific consultant, leading palaeontologist Dr. Darren Naish, has guided the science at every step of the way.”

More than 100 artists and technicians created the experience, which features eight prehistoric giants, including the iconic Tyrannosaurus rex, the three-horned Triceratops, the towering Alamosaurus and the amazing Quetzalcoatlus – the largest creature ever to fly.

“The show is what we call ‘mixed reality’ – the TimeBase research station is a real, physical building where you walk around in the laboratories and the animal labs. You see an autopsy in progress on a dinosaur which died outside near the TimeBase, baby dinosaurs in cages, and others hatching from eggs,” says Deere.

“And that real building is surrounded by an equally real digital world of dinosaurs which you see, hear and sometimes even feel threatened by as you look out of the research station windows.”

“Creating the surrounding digital world in stereoscopic 3D, was a huge challenge. The dinosaurs had to look completely believable. For that we enlisted Milk, the London visual effects house. They’ve worked on many top-end projects and have won an Oscar, but said Dinosaurs in the Wild was one of their most complex pieces of work ever.”

The project took more than a thousand hours of animation and more than 77 million frames were rendered in Ultra 4K.

Knitting the whole show together into an event ready for the public was the next big challenge for Deere, who ensured that the team could move it efficiently and quickly between venues.

‘It’s a 2,500sqm event, so this is no small undertaking. We spent quite a lot of time at the start of the project just getting a first class team of industry professionals together and that has paid off at every stage. From technical management, sound, lighting, set construction, screens and servers, theatrical direction, event and stage management – we honestly could not have asked for a better and more expert group of people. Everything has come together to make this into an event with high production values that the team are proud of.

“The show reflects the level of investment, around £12m, and many visitors have said it’s the kind of quality experience they associate with Universal Studios or Disneyland.”

After successful seasons in Birmingham and Manchester at existing event centres, Dinosaurs in the Wild came to London. But, with no permanent building available to accommodate such a large show for a long period of time, organisers turned to temporary structure specialists Neptunus to create a bespoke venue.

1,600sqm of Alu Hall structures were constructed behind the temporary building to accommodate the requirements of the back-of-house support team, while a 600sqm Alure Globe structure links to the Evolution to form a foyer and reception area for visitors.

The venue houses two ‘time machines’ and a dinosaur research station, TimeBase 67. Visitors and their guides tour a range of laboratories and witness wonders like dinosaurs hatching, an autopsy on a giant Pachycephalosaurus, and an observation lookout where dinosaurs roam in the wild all around them.

Trish McClenaghan, event manager for Dinosaurs in the Wild, says the temporary structure was a big success story.

“From the visitor’s point of view there is no difference in the experience in this temporary building than for the events we staged at the NEC in Birmingham and EventCity in Manchester, it is just the same.

“The Dinosaurs in the Wild experience has been designed to be staged in different places and as the temporary structures are so good, it means that we have the ability to take the show anywhere.”

Deere adds: “There were no regular venues available for the event in London for the length of time we needed. We worked with our colleagues at Kilimanjaro Live to scour London for potential locations for a temporary venue. The Greenwich Peninsula seemed ideal and Knight Dragon the landlords were keen to work with us – there’s a big local catchment of course, but the peninsula is also already established as an entertainment destination with the O2 sitting there and great public transport links.

“We’re just a ten minute walk from the North Greenwich tube, and buses run from the station past the venue all the time.

“There were challenges in getting the piece of land ready for the event but again we had a good team in place who worked through that and we opened on time.”

In Birmingham and Manchester the show took place at the NEC and EventCity respectively. But the London leg proved the event can sit in the sort of temporary venue that Neptunus built in North Greenwich.

“It’s liberating to know that you can pick this show up and put it in a temporary structure pretty much anywhere. That could be an important factor in the planning we’re doing now to take Dinosaurs in the Wild to many other parts of the world,” Deere concludes.