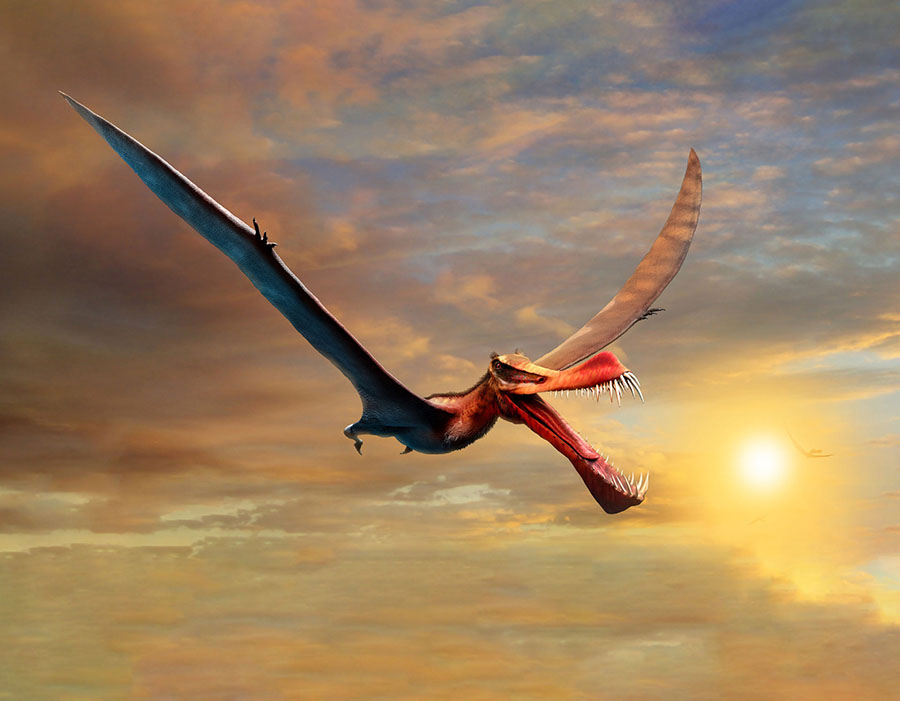 Paleontologists in Australia say they have discovered the fossilized skeletal remains of a new species of flying reptile that lived between 113 and 100 million years ago (Cretaceous period) and had an estimated wingspan of 7 m (23 feet).

Pterosaurs were highly successful reptiles (not dinosaurs, as they’re commonly mislabeled) that lived between 210 and 65 million years ago.

Some pterosaurs, such as the giant azhdarchids, were the largest flying animals of all time, with wingspans exceeding 9 m (30 feet) and standing heights comparable to modern giraffes.

Since the discovery of the first Australian pterosaur fossils almost four decades ago, fewer than 20 specimens have been described.

From these, only three species have been named: Mythunga camara, Aussiedraco molnari, and Ferrodraco lentoni. They come from the mid-Cretaceous rocks of the Rolling Downs Group, part of the Eromanga Basin in Queensland.

“The new pterosaur, which we named Thapunngaka shawi, would have been a fearsome beast, with a spear-like mouth and a wingspan around 7 m,” said Tim Richards, a Ph.D. candidate at the University of Queensland.

“It was essentially just a skull with a long neck, bolted on a pair of long wings.”

“This thing would have been quite savage. It would have cast a great shadow over some quivering little dinosaur that wouldn’t have heard it until it was too late.”

Thapunngaka shawi belongs to a group of crested pterosaurs known as Anhangueridae.

“What was particularly striking about this new species of anhanguerian was the massive size of the bony crest on its lower jaw, which it presumably had on the upper jaw as well,” said Dr. Steve Salisbury, also from the University of Queensland.

“These crests probably played a role in the flight dynamics of these creatures, and hopefully future research will deliver more definitive answers.”

A partial mandible of Thapunngaka shawi was found by local fossicker Len Shaw in June 2011 at a site known as the ‘water pond’ near Richmond, North West Queensland, Australia.

Originally developed as a quarry for road dressing, this site exposes a heavily weathered 4-5 m (13-16-foot) thick sequence of marls and coquinas of the Toolebuc Formation.

“It’s quite amazing fossils of these animals exist at all,” Richards said.

“It is only the third species of anhanguerian pterosaur known from Australia, with all three species hailing from western Queensland.”

The discovery of Thapunngaka shawi is described in a paper published today in the Journal of Vertebrate Paleontology.

Why Do They Continue to Make Jurassic Park Movies?

When it first came out, the original ...

The Canceled Jurassic Park Game We Never Got To Play

Multiple, well-preserved trackways made by...

These Adorable Dinosaur Planters Water Your Plants For You

If you’ve ever wanted to grow your own...

Paleontologist Believes There is a Wealth of Fossils in Mexico

Some of what has been discovered can be seen...