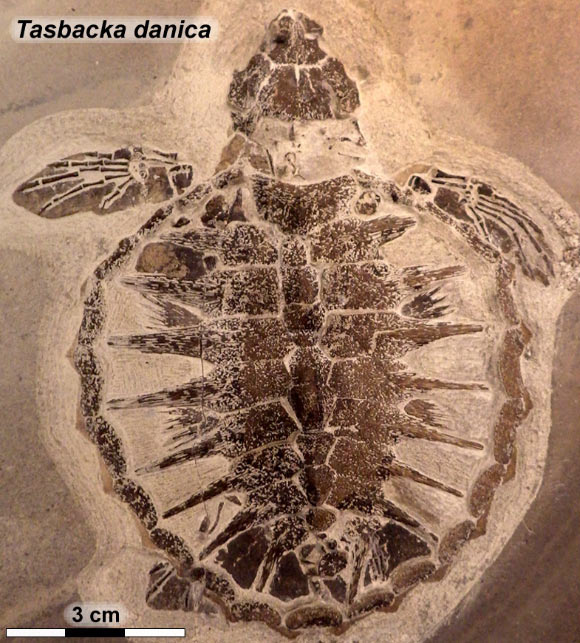 The extremely well-preserved hatchling of Tasbacka danica was collected in 2008 from within a limestone concretion in the Ejerslev Mo-clay pit on the Isle of Mors, Denmark. The specimen is less than 3 inches (7.4 cm) long.

They then investigated the microscopic and molecular contents of soft tissues retrieved from the fossil.

“Our results show that a number of biomolecules, which can be directly linked to the animal itself, are preserved in an identifiable form,” Dr. Lindgren said.

“Our results indicate that the baby turtle had the same color patterns 54 million years ago as they do today, that is, a dark back with light/pale edges,” they said.

“This coloration is an adaptation that provides protection against harmful UV radiation from the Sun, but they also use the dark skin to increase their body heat, thereby growing faster.”

“This phenomenon is called adaptive melanism and entails the animal’s ability to utilize color for survival purposes.”

“The presence of eukaryotic melanin within a melanosome embedded in a keratin matrix rules out contamination by microbes, because microbes cannot make eukaryotic melanin or keratin,” said co-author Professor Mary Schweitzer, of North Carolina State University and Lund University.

“So we know that these hatchlings had the dark coloration common to modern sea turtles.”

“The data not only support the preservation of multiple proteins, but also suggest that coloration was used for physiology as far back as the Eocene, in the same manner as it is today.”

The discovery of several biomolecules could, eventually, enable researchers to study the evolution of life at the molecular level through geological time.

“We have previously identified eumelanin in fossilized skin, but the fact that the organic matter from this baby turtle contained such a wide range of identifiable biomolecular remains came as a big surprise,” Dr. Lindgren said.

Furthermore, the results of the study call for a revision of what fossils actually are and what they consist of.

“Fossils are not only petrifactions, but can sometimes consist of parts of the original biological material,” Dr. Lindgren said.