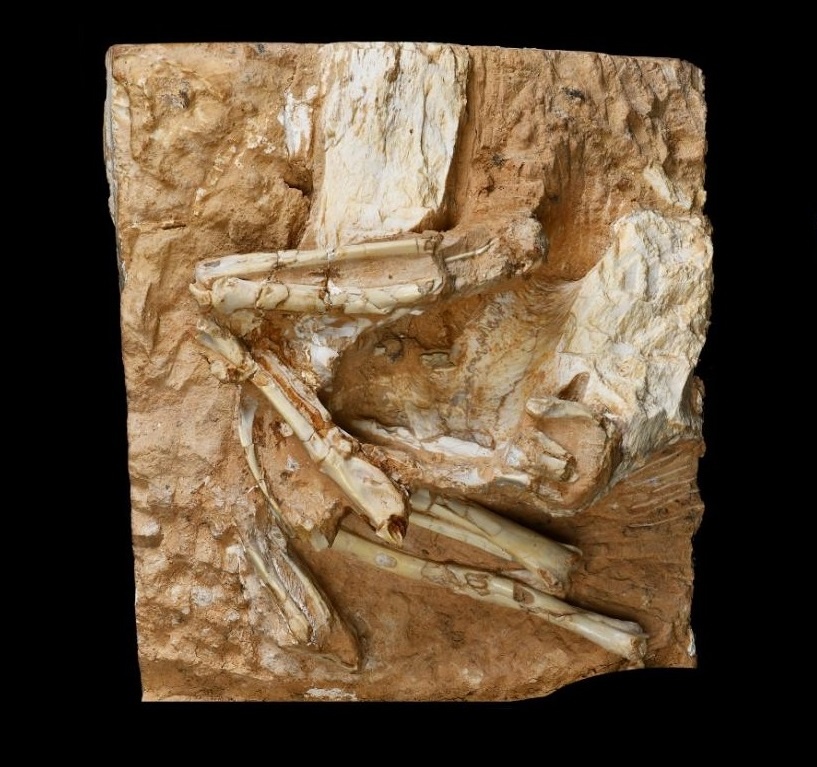 Researchers from the Institute of Vertebrate Paleontology and Paleoanthropology (IVPP) of the Chinese Academy of Sciences have found a new species of sandgrouse in six to nine million-year-old rocks in Gansu Province in western China.

The newly discovered species points to dry, arid habitats near the edge of the Tibetan Plateau as it rose to its current extreme altitude.

According to their study published in Frontiers in Ecology and Evolution on Mar. 31, the new species, named Linxiavis inaquosus, fills a nearly 20 million-year gap in the sandgrouse fossil record.

The fossil of the partial skeleton includes much of the body, such as the shoulder girdles, wishbone, bones from both wings, vertebrae, and part of a leg. Unfortunately, the head is missing.

“As the oldest fossil of a sandgrouse in Asia and the most complete fossil known from the group, the new skeleton provides a key link in expanding our understanding of the evolution of the sandgrouse living in China today, as well as the ecosystem associated with the Tibetan Plateau and the species that live only there,” said Dr. LI Zhiheng, first author of the study.

Sandgrouse are a group of 16 species of birds related to doves and pigeons that live in some of the most arid areas across Europe, Asia, and Africa. The association between sandgrouse and dry environments has helped scientists determine that the area next to the Tibetan Plateau was equally arid when Linxiavis inaquosus lived during the period known as the late Miocene.

“Most people would probably think of the Tibetan Plateau, with its high elevation, low oxygen levels, and harsh sun as one of the last places to be invaded by a group of animals. But in this case, our fossil suggests that sandgrouse might have quickly adapted to the dry, mountainous plateau millions of years ago,” said the coauthor Dr. Thomas A. Stidham.

Importantly, this fossil is from the time period known as the late Miocene when the Tibetan Plateau was continuing to rise rapidly in altitude and changing the climate of central Asia with an increase in aridity, along with a strong monsoon season.

This fossil was found at over 2,000 meters above sea level and within sight of Tibetan Plateau peaks that exceed 4,000 meters. That elevation is far greater than where all species of sandgrouse, except for the specialized Tibetan Sandgrouse, live today.

Despite the elevation and arid conditions, other fossils from the area show that the ecosystem was quite diverse. Dr. Stidham explains, “If you were on the edge of the Tibetan Plateau where our fossil is from six or seven million years ago, it would have looked quite like a nature documentary about the savannas in Africa, with the horizon filled with extinct relatives of hyenas, elephants, rhinos, pigs, antelopes, horses, ostriches, vultures, falcons, and of course now, sandgrouse.”

“We are discovering many fossil birds in this area by the Tibetan Plateau that help us to understand the relationships between the plateau, climate change, and biodiversity. We’re likely to keep uncovering more unusual and amazing bird fossils like this sandgrouse and the pheasant with a windpipe longer than its body that we reported a couple of years ago,” said Dr. LI.

Sam Neill, who played Dr. Grant in the first three Jurassic Park films, has acknowledged a possible July return to production on...

Jurassic World: Dominion” is supposed to mark the end of the new trilogy. However, the producers are planning to use the film to setup...

Concept art for Jurassic World confirms another hybrid dinosaur, known as the...

An analysis of the fossilized vertebrate remains from the Jurassic Mygatt-Moore Quarry in Colorado has revealed the bones of a...

A grade I listed dinosaur statue in London has been damaged, leaving people connected to the site distraught.