Understanding and knowing the evolution of the planet, in addition to the living beings that have inhabited it for millions of years, is possible thanks to the discovery of fossils, those remains of organisms that have been preserved in rocks.

Although fossils can undergo transformations caused by changes in each ecosystem, many remains remain in the ideal state to be studied.

Thanks to fossils, paleontologists are able to discover species that lived several million years ago. It is possible to know the physical characteristics he had, the period in which they lived and even arm his body with the remains.

In this context, in 2008 a fossil of a sea turtle was found in Ciudad Jiménez, Coahuila, which had not been described or registered in the species archives … until today. 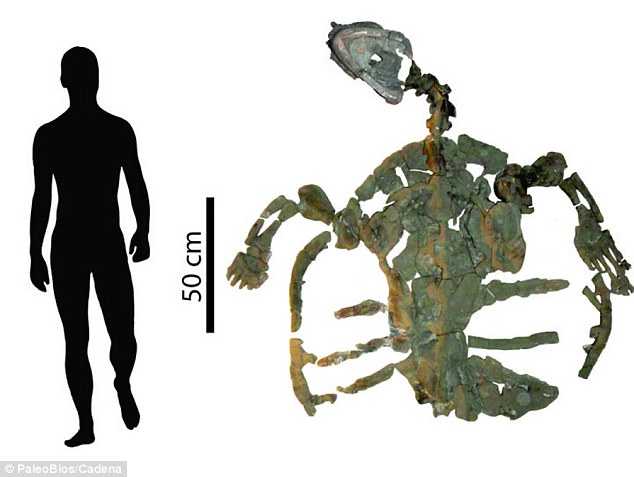 Eleven years after the discovery, paleontologist Oliver Ariel López decided to create the first sea turtle fossil record, which appears to be the largest in Mexico and is now sheltered at the Múzquiz Paleontology Museum.

The fossil belongs to the family “Protostegidae” and is the first turtle of the genus Desmatochelys described in the country, in addition to being the first southern species recorded in the “late Cretaceous” period.

This means that the geographical distribution of the turtle expands towards the inland sea of North America and leaves open the possibility of finding more fossils in the south of the country since so far all fossils of that species are collected in the United States.

This specimen, found in Coahuila, is the largest known in Mexico: it is one meter long and 80 centimeters wide. In addition, bone elements were found that allowed defining the gender to which it belongs.

Also, it was possible to record that the specimen lived 90 million years ago in the Turonian or Cretaceous period and that it opens the folder on these reptiles that were forgotten by Mexican researchers.

The turtle fossil was found complete and this allows paleontologists to describe it 100%. In addition to this, certain elements that can differentiate the sea turtle from the rest of the fossils found in the United States were recorded.

The turtle will be included in the same group of the Dermochelyidae family for belonging to the same period of the other specimens. However, paleontologist Oliver López believes that this species may be a genus-species never described before.

The Iranian woman’s first venture will be to...

Most Bizarre Dinosaur Movies From Around The World

Most movie fans can name all the best...

Fossilized Skull Reveals How Crested Dinosaur Got Its Fancy Headgear

How to Change Dinosaur Colors in Parkasaurus

In the dinosaur-zoo management tycoon game...

6 NEW Books for Kids About Dinosaurs

I’ve got dinosaurs on my mind lately—not...

A geological research team announced that...