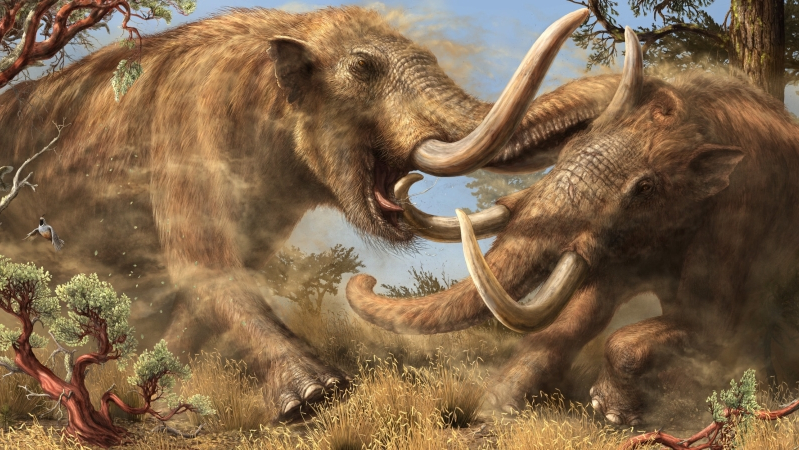 If you ponder mammoths, certain species of which died out a mere 3,000 or so years ago, their existence is but a breath away from our own. Echoes of their lives can be seen in today’s elephants, which lumber across our world in ways that might not be so different than their ancient relatives. Mammoths are almost tangible in that way.

Fewer people know of mastodons, the stockier, and in some cases, hairier, forest-dwelling cousins of mammoths. Just like some species of mammoth, the American mastodon (Mammut americanum) lived throughout North America during the Pleistocene. Their extinction came some 10,000 to 12,000 years ago.

The predominant species, excavated and studied from coast-to-coast for over 200 years, has been Mammut american.

In a new paper published in PeerJ, Alton Dooley, Jr. and colleagues announce the discovery of Mammut pacificus, a new species of mastodon specific to a small segment of the North American West. It is the first new North American mastodon species to be recognized in 50 years.

None of the six authors expected this result from their research. In fact, they explored every other avenue exceptdefining a new species in the years leading up to this paper.

“I felt like I was fighting tooth and nail against a new species,” Dooley, Jr. told me, “and every time I tried to fight, the data kept hammering me down!”

“One of the reasons that we didn’t expect this is [because] it’s a Pleistocene megafaunal animal. The Pleistocene is so well studied. That’s not to say we understand everything about it, but it’s not that long ago, [and therefore] there are huge Pleistocene collections all over the world,” said Dooley, who is executive director of the Western Science Center. “I’m shocked that there’s a mastodon taxon that went unrecognized for so long.”

Adding to the surprise is that none of the fossils studied in this research was excavated recently. Many were carefully collected from what is now known as Diamond Valley Lake and eventually stored at the Western Science Center in Hemet, California. A team of diggers lead by co-author Kathleen Springer worked to excavate as many fossils as possible in the 1990s. They uncovered 100,000 Pleistocene fossils. Any thing else now remains under billions of gallons of water—an emergency water reservoir for southern California.

It is important to note, however, that 100 individual mastodons were found in that dig, known as the Diamond Valley Lake assemblage. That is the largest number of mastodons in the southwest not found in a tar pit, and it certainly added to the overall data set. [Full disclosure: I contributed to a crowdfunding campaign that supported the initial research of this study three years ago.]

With narrower molars than their American mastodon cousins, more vertebrae in the pelvis, a lack of any lower tusk in the jaw and a slightly different femur, these differences may point to one reason why this species remained hidden in plain view.

“Naming a new species, especially in the fossil record, can as much a ‘decision’ as a ‘discovery,’” Adrian Lister, a proboscidean expert at the Natural History Museum of London, told me via email. “Unless the new species is quite obviously unique, it will have one or more close relatives, as is the case here, so the question becomes: Should these be considered separate species or just subspecies or some other kind of variety? Even for living species, where we have much more information… there is often disagreement among taxonomists as to what constitutes a species.”

“In the case of the mastodons, I think the authors have a reasonable basis for erecting a new species. The differences are not major…[b]ut the differences are consistent, and importantly, the authors show this difference has both a clear geographical basis (California and maybe adjacent states) and also persisted through the 2 million years or so of the Pleistocene,” Lister wrote. “That is indicative of an entrenched geographical and presumably genetic difference that makes the erection of a new species defensible.”

Eric Scott, co-author of the new study and a paleontologist who worked with Kathleen Springer to excavate the Diamond Valley Lake assemblage, often met with Dooley, Jr. to debate the meaning behind the fossil data.

“There was a concrete difference in these animals that was consistent across a geographic area,” Scott said. “And, this was the important part to me, it was consistent for a prolonged period of geological time. I had the same issue with [fossil] horses. If you have an anatomical configuration of a horse that’s different in one area than it is anywhere else, and it holds that anatomy for tens of thousands of years, that suggests that it’s not exchanging genetic information with any of those other horses, which is reproductive isolation, which is the biological definition of a species. [We were] seeing the same thing with these mastodons.”

Kathleen Springer, the main force behind the Diamond Valley Lake excavations and now a geologist at the U.S. Geological Survey, is justifiably excited.

“[T]his is a spectacular result, from the perspective of vertebrate paleontology and the process of science,” she wrote in an email. “[It is also] testimonial for the necessity and utility of natural history museums.”

Her work at the new USGS Radiocarbon Laboratory provided new radiocarbon dating for many of the mastodons studied in this research, using “material that had never been attempted prior (eggshell, Succineidae gastropod shells, and plant fibers).”

What does this research mean for the average person and why should we care? Aside from augmenting our knowledge of Pleistocene megafauna, it increases our understanding of life on this planet. It takes us one step closer to knowing how that life evolved, existed, and eventually went extinct. And it certainly encourages even more questions that beg to be answered: Why, for example, did this particular species evolve with these particular anatomical traits? What does that say about the environment in which it lived?

Brett Dooley, another co-author of the paper and an educator at the Western Science Center, expressed the hope that having the research published in an open-access journal will encourage more people to read about the new mastodon.

“I’m [also] hoping that people from the Hemet region will take some pride in it, as [naming a new species] isn’t something that happens every day. I hope that they can appreciate that and take a sense of ownership for it themselves.”