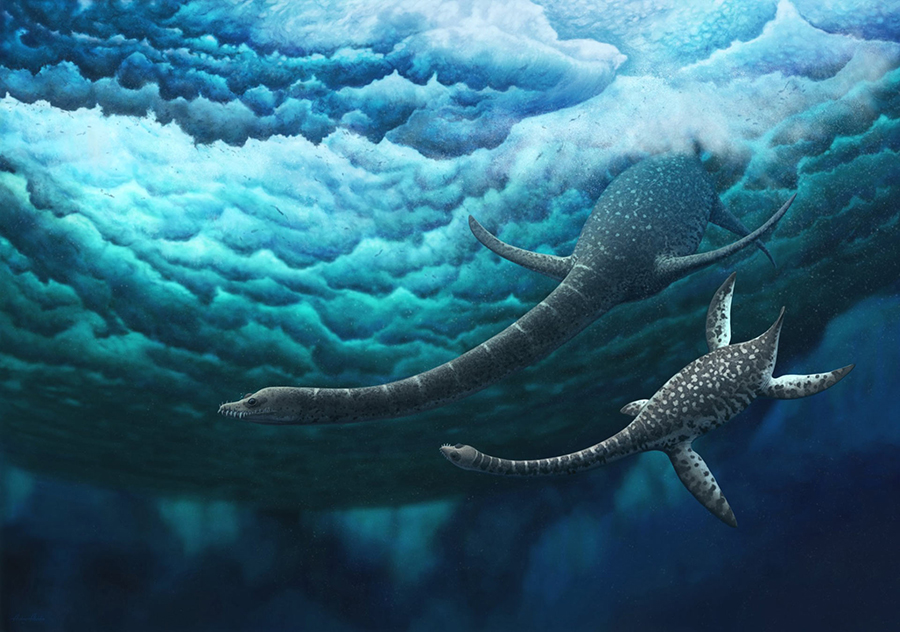 A new genus and species of elasmosaurid plesiosaur has been identified by an international team of paleontologists led by Dr. Valentin Fischer from the Evolution & Diversity Dynamics Lab at the Université de Liège.

This marine reptile belongs to Elasmosauridae, a family of plesiosaurs characterized by extremely long necks and slim bodies.

“Plesiosaurian marine reptiles evolved a wide range of body shapes during the Jurassic and Cretaceous, including long-necked forms,” Dr. Fischer and colleagues wrote in their paper.

“However, the early evolution of elasmosaurids remains poorly understood because of a generally poor Lower Cretaceous fossil record.”

The partial skeleton of a mature individual of Jucha squalea was unearthed in 2007 in the vicinity of the Slantsevy Rudnik village near Ulyanovsk in Eastern Europe.

“Jucha squalea represents one of the geologically oldest occurrences of elasmosaurids,” the paleontologists wrote.

“It lacks a series of features that otherwise characterize the group, such as the pectoral bar and the heart-shaped intercoracoid fenestra, and thus documents some of the earliest stages of the elasmosaurid radiation.”

“Jucha squalea marks an early attempt at cervical elongation in elasmosaurids via differential growth, possessing anterior cervical centra that are much more elongated than those of other early xenopsarians,” they added.

“The cervical shape values we gathered suggest that elasmosaurids underwent multiple episodes of cervical shortening, notably during the Early Cretaceous.”

The team’s paper was published online in the Zoological Journal of the Linnean Society.

From Dragons to Giants, Here's What People First Thought of Dinosaur Bones

Jurassic World Evolution Troodon – How to Get the Troodon

The first expansion for Jurassic...

Long-Lost Moth a Link to the Dinosaur Age

Explained: Why do People Want to Pay Millions of Dollars for Dinosaur Bones?

In India, palaeontologists fear that the country’s rich fossil heritage is under threat in the absence of stringent laws and...

Experts have unearthed a remarkable addition to Ice Age artefacts - an ancient ancestor to the modern-day rhino.

Allosaurus was one of...

‘The Story of Evolution in 25 Discoveries’ Review: The Branching Tree of Life

The great but grumpy biologist J.B.S. Haldane was once asked what evidence would disprove evolution, whereupon he growled: “Fossil...

John Hammond (Richard Attenborough) is the kindly owner of ...

From giant parrots and feathered ...

25 Movies That Deal With Prehistoric Times

Some movies are about history, but others deal with matters that predate history. There’s something fascinating about prehistoric...

Jurassic Park may not be as complex as some sci-fi, but there are layers to the dino-thriller's ending that not all fans caught on...