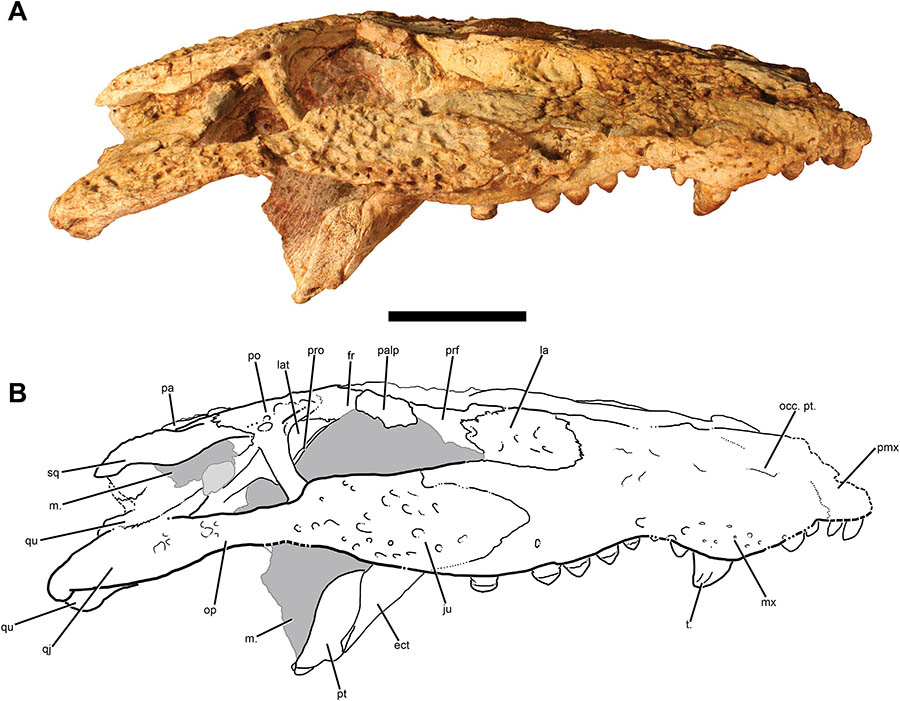 A new genus and species of caimanine alligatorid being named Chinatichampsus wilsonorum has been discovered by a team of paleontologists from Virginia Tech, the University of Texas at Austin, and the University of Iowa.

Chinatichampsus wilsonorum roamed our planet about 42 million years ago, during the Middle Eocene epoch.

Its partial skull was discovered in 2010 at the Dalquest Desert Research Site in Brewster County, Texas, the United States.

“This caiman seems out of place,” said Dr. Christopher Brochu, a paleontologist in the Department of Earth and Environmental Sciences at the University of Iowa.

Roughly 56 million years ago, Earth was experiencing temperatures so hot and methane levels so high that no polar ice caps could form.

For large cool-blooded reptiles like alligators and caimans, it was their time to thrive and soak up the Sun. In fact, the conditions were so favorable that these early reptiles roamed as far north as northern Canada.

“Caimans today are a South American radiation, and data from modern forms, including DNA, would suggest a very simple single origin from a North American ancestor,” Dr. Brochu said.

“This new form, along with some older North American fossil caimans, suggests a far more complex early history with multiple crossings of the seaway that separated North and South America until fairly recently.”

“The presence of a fossil caiman about 1,200 km (746 miles) north of where caimans are found today, really says something about how different the climate of West Texas was in the middle Eocene,” said Dr. Chris Kirk, a paleontologist in the Department of Anthropology and the Jackson School Museum of Earth History at the University of Texas at Austin.

“But one epoch later, in the Oligocene, the entire world was experiencing cooler temperatures, forcing many species that require warm and humid conditions into more restricted geographic ranges.”

“Any fossil that we find has unique information that it contributes to understanding the history of life,” said Dr. Michelle Stocker, a paleontologist in the Department of Geosciences at Virginia Tech.

“From what we have, we are able to understand a little bit more about the evolutionary history of caimans and the alligatorid group, which includes alligators and caimans.”

The team’s paper was published in the journal PeerJ.

With Jurassic World going down as a huge hit...

An analysis of the fossilized vertebrate...

'Friends': How Much Did Ross Geller Make as a Paleontologist?

Ross Geller was the “successful” one in...

According to a new rumor, dinosaurs ...

Steak knife-like teeth in the most complete...

'Biggest Dinosaur Ever Found' on Display at Chicago Museum

There have been suggestions that the corpse...