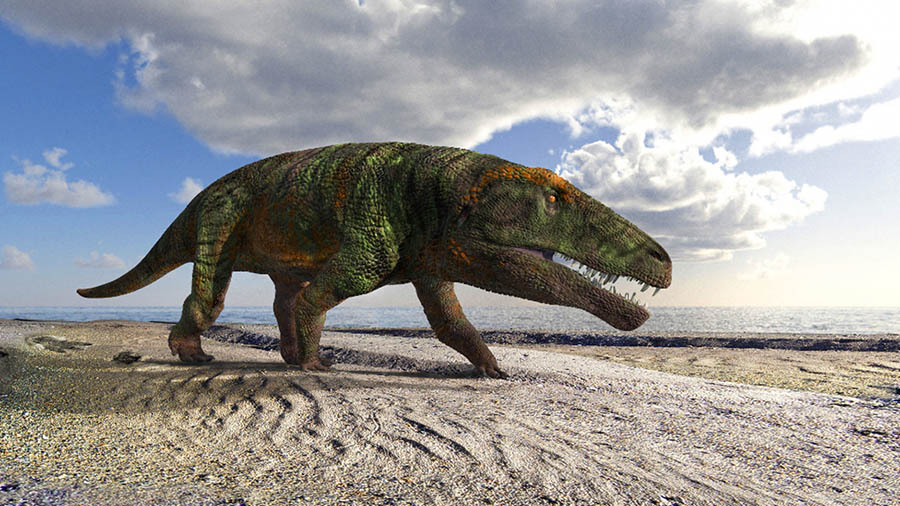 Paleontologists in Italy have discovered an assemblage of fossil footprints left by an Early Triassic archosauriform.

The archosauriform footprints were spotted at a paleontological site on the Gardetta Plateau in the Western Alps, Italy.

Most of the specimens are preserved as natural molds on top of a 3-4 cm thick bed of fine sandstone.

They are shallow, less than 2 cm deep, but most are cut by small-scale cracks/fissures and strongly weathered.

The tracks are preserved on two distinct surfaces, labeled GT-1 and GT-2.

“GT-1 consists of four clear and two weakly impressed imprints, arranged in a 2.1 m-long trackway in the lower part of the outcrop, just 2 m above the creek level. Its direction on the steep bedding plane points upwards to southeast,” said Dr. Marco Romano from the Department of Earth Sciences at the Sapienza University of Rome and colleagues.

“GT-2 is 2.4-m-long, is preserved in the lower part of the same bedding plane, about 2 m above the creek level.”

The paleontologists assigned the tracks to the new ichnospecies, Isochirotherium gardettensis, and interpreted them as produced by a large-bodied, predatory archosauriform, probably erythrosuchid, trackmaker.

They were made approximately 250 million years ago (Early Triassic period), soon after the Permian-Triassic mass extinction event.

“This new discovery provides further evidence for the presence of archosauriformes at low latitudes during the Early Triassic epoch,” the researchers said.

“It supports a model in which the Permian-Triassic mass extinction did not completely vacate low-latitude lands from tetrapods that therefore would have been able to cope with the extreme hot temperatures of Pangaea mainland.”

The team’s paper was published in the journal PeerJ.

F.M. Petti et al. 2020. Archosauriform footprints in the Lower Triassic of Western Alps and their role in understanding the effects of the Permian-Triassic hyperthermal. PeerJ 8: e10522; doi: 10.7717/peerj.10522

When scientists first unearthed fossils of a...

Here's What Made Ankylosaurus the Armored Tank of Dinosaurs

Budding paleontologists will be able to...

Even Dinosaurs Had Parasites

Paleontologists have discovered tracks and...