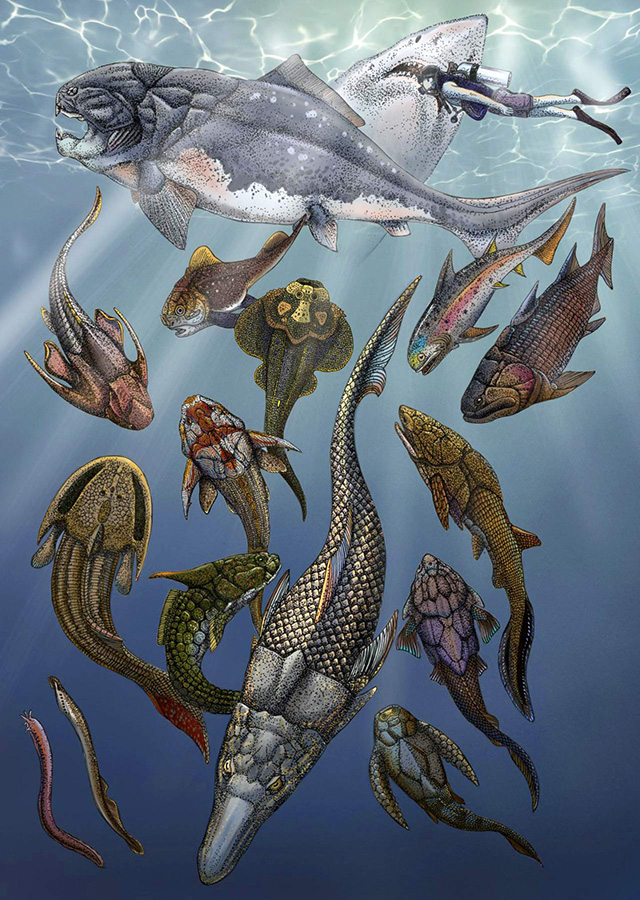 Paleontologists have found that Brindabellaspis stensioi, a species of long-beaked placoderm fish that lived 400 million years ago (Early Devonian period), had a surprisingly compact inner ear and that its closely connected components resembled those of modern jawed vertebrates such as sharks and bony fishes. Most placoderms had less complex inner ear structures, with a large sac, called a vestibule, placed in the center and separating all the other components.

Brindabellaspis stensioi was first found in 1980 in limestone around Lake Burrinjuck in New South Wales, Australia, an area containing some of the world’s earliest known reef fish fauna.

Nicknamed ‘platypus fish,’ it had a long snout, reminiscent of a platypus bill.

“The inner ear structure of Brindabellaspis stensioi is so delicate and fragile that it is rarely preserved in fossils, so being able to use these new techniques to re-examine specimens and discover this wealth of new information is very exciting,” said Dr. Sam Giles, a researcher in the School of Geography, Earth and Environmental Sciences at the University of Birmingham and the Department of Earth Sciences at the Natural History Museum, London.

Using cutting-edge microCT scanning, Dr. Giles and colleagues examined several specimens of Brindabellaspis stensioi recovered from an ancient reef near the Brindabella Moutains on the border of New South Wales.

The fossils were unusually well preserved, giving the paleontologists a rare opportunity to examine inside the brain cavity.

Their early analysis led them to conclude these fish were closely related to primitive, jawless fishes that first appeared some 500 million years ago.

The more recent analysis, however, challenges assumptions that placoderms were a distinct group and supports the possibility that they, in fact, contained the origins of modern jawed vertebrates.

“This fossil has revealed a really intriguing mosaic of primitive features and a surprisingly modern inner ear,” Dr. Giles said.

“We don’t yet know for certain what this means in terms of our understanding of how modern jawed vertebrates evolved, but it’s likely that virtual anatomy techniques are going to be a critical tool for piecing together this fascinating jigsaw puzzle.”

“Which hypothesis is closer to the truth? The simple answer is we don’t know yet,” said Dr. Youan Zhu, a researcher at the Institute of Vertebrate Paleontology and Paleoanthropology of the Chinese Academy of Sciences and the Department of Organismal Biology at Uppsala University.

“Molecular data suggest that jawed vertebrates arose in the Middle Ordovician, some 60 million years before Brindabellaspis stensioi was cruising the ancient reefs.”

“The answer may be in that missing 60-million-year period, in which fossils are very rare.”

The findings were published in the journal Current Biology.