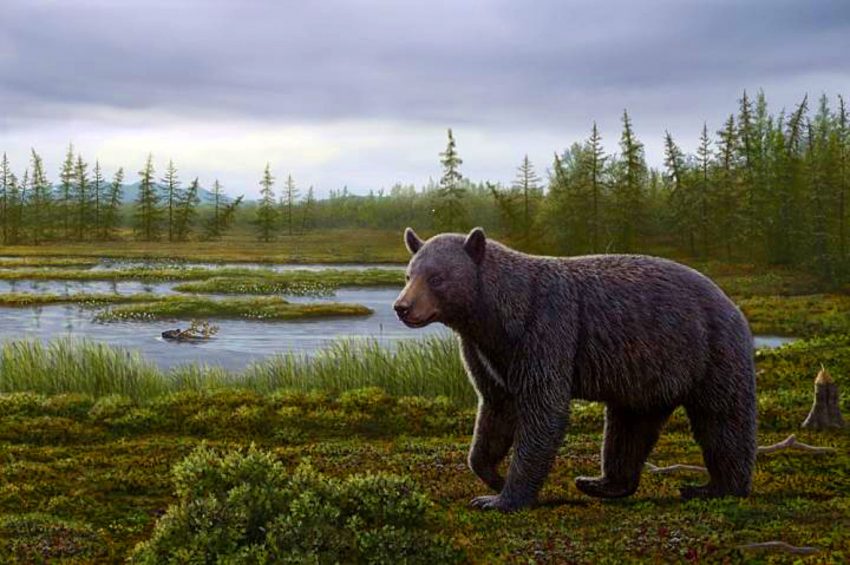 An international team of paleontologists has found the remains of an unusual prehistoric bear that lived 3.5 million years ago (Pliocene epoch) in Canada’s High Arctic.

The High Arctic bear is a close relative of the ancestor of modern bears. It represents an ursine bear (all living bears plus their ancestors, except the giant panda) species called Protarctos abstrusus.

The animal was the size of an Asian black bear and slightly smaller than an American black bear, with a flatter head and a combination of primitive and advanced dental characters.

“This is evidence of the most northerly record for primitive bears, and provides an idea of what the ancestor of modern bears may have looked like,” said team member Dr. Xiaoming Wang, from the Natural History Museum of Los Angeles County.

Protarctos abstrusus was previously known only from a tooth found in Idaho, but Dr. Wang and colleagues found the skull, jaws, teeth and parts of the skeleton from two individuals.

“The skeletal remains of Protarctos abstrusus were collected in different years (1992-2006) from the Beaver Pond site on Ellesmere Island, Nunavut, Canadian Arctic,” the paleontologists explained.

The fossil bear lived in a northern boreal-type forest habitat, where there would have been 24-hour darkness in winter, as well as about six months of ice and snow.

“Modern bears are wide-ranging, found from equatorial to polar regions. Their ancestors, mainly found in Eurasia, date to about 5 million years ago,” the researchers said.

“The new fossil represents one of the early immigrations from Asia to North America but it is probably not a direct ancestor to the modern American black bear.”

Of further significance is that the teeth of both Protarctos abstrusus individuals show signs of dental cavities.

“Dental evidence from Protarctos abstrusus appears to be from two individuals, including an apparent young adult, and both show dental caries, suggesting their diets included high amounts of fermentable carbohydrates early in their lives,” the authors explained.

“Simple sugars, such as glucose and fructose, are readily metabolized by many bacteria found in the oral biofilm into various acids. These acids demineralize enamel and dentin and may lead to dental caries.”

“This is the first and earliest documented occurrence of high-calorie diet in basal bears, likely related to fat storage in preparation for the harsh Arctic winters,” Dr. Wang said.

“The dental cavities in Protarctos abstrusus suggest that consumption of sugar-rich foods like berries, in preparation for winter hibernation, developed early in the evolution of bears as a survival strategy.”

The team’s findings appear in the journal Scientific Reports.