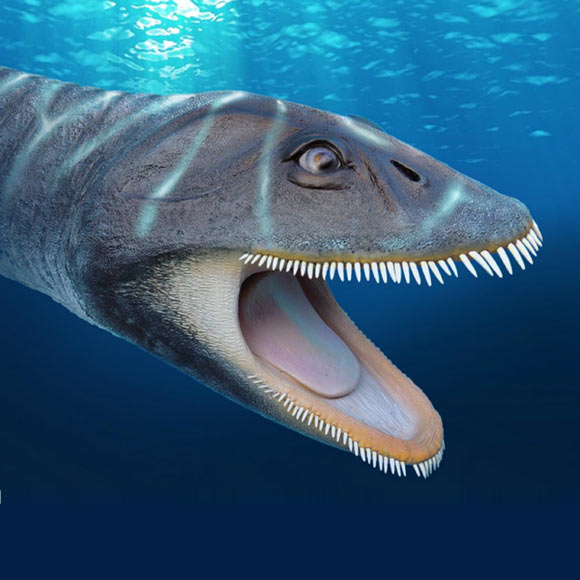 In 1984, Texas Tech University paleontologists Sankar Chatterjee and Bryan Small unearthed the fossilized skull of a previously unknown marine reptile on Seymour Island in Antarctica. While Morturneria seymourensis was obviously a plesiosaur, it was unlike any previously found. Now, three decades later, Professor Chatterjee and colleagues have made a new discovery about Morturneria seymourensis, one that adds a new dimension to our understanding of plesiosaurs.

Plesiosaurs (‘near to lizard’ in Greek) are a group of extinct marine reptiles that roamed the vast seas of the Triassic, Jurassic and Cretaceous periods, between 235 and 66 million years ago. Their fossils have been found on every continent on Earth, with key discoveries made in Australia, Europe and North America.

They had a broad, flat body and short tail, four long flippers they used to ‘fly’ through the water, long necks and very sharp teeth.

“The teeth of most plesiosaurs are conical, stout, sharp, robust and ideal for stabbing and killing large animals,” Professor Chatterjee said.

But as he wrote in his 1989 paper, ‘the long, slender and delicate teeth of Morturneria seymourensis may have formed a ‘trapping’ device that enabled the animal to feed on small fish and crustaceans that abound in the same deposits.’

“In our paper, we described the unusual teeth of Morturneria seymourensisand their probable function,” Professor Chatterjee said.

“However, our new team, who had worked on plesiosaurs from many continents, found them fascinating and unique.”

The paleontologists reconstructed Morturneria seymourensis with a large, round head, a huge mouth and tiny teeth that point the wrong way. The teeth did not meet tip to tip as in all other plesiosaurs, but lay together in a battery that strained food particles from the water.

“When the jaw was closed, teeth from the upper and lower jaws formed a nice trap,” Professor Chatterjee said.

“Basically, the animal would swallow a school of krill, close the jaws to let the water out, but keep the krill inside for chewing and swallowing. With these kind of interdigitating delicate teeth, the animal could not tackle the large fish or shelled animals (called ammonites) that were the favorite foods of most plesiosaurs.”

The major finding is that Morturneria seymourensis used a filter-feeding method. This feeding style is unknown in other marine reptiles, but is found in today’s baleen whales.

“The identification of Morturneria seymourensis’ whale-like filter feeding is a startling case of convergent evolution between reptiles and mammals,” Professor Chatterjee said.

“Plesiosaurs and whales shared many of the intervening steps in the evolution of this feeding style and their extreme morphologies are similar despite arising from different ancestors.”

“Convergent evolution does not imply Morturneria seymourensis was in any way related to today’s baleen whales; it just means they both evolved the same way. They had adopted similar lifestyle and feeding. For example, birds and bats fly, but birds are now considered dinosaurs and bats are mammals,” he said.

The research is published in the Journal of Vertebrate Paleontology.

This article is based on text provided by Texas Tech University.

The volcano in “Jurassic World: Fallen...

Rhoetosaurus brownei: A 'High-Heeled' Dinosaur that Walked on its Tiptoes

When And How Did Dinosaurs Go Extinct?

A geological research team announced that...