Prehistory had no shortage of terrifying monsters, with everything from the more well-known Raptors and Rexes to super rats and three-eyed shrimp.

8 - A Carnivorous Monster With a 40-Foot Wingspan.

The concept of a flying, carnivorous lizard is plenty terrifying on its own. Even in movies, pterodactyls and such are pretty small, because you simply don’t need to up the fear quotient by depicting the things as 40 feet across or like 400 pounds. But that didn’t stop nature from being the unholy little achiever that it is and doing just that.

The Azhdarchidae family were a group of gigantic pterosaurs that plied the skies of the late Cretaceous. Members of the group included Quetzalcoatlus (named after the Aztec sun god Quetzalcoatl, a giant feathered serpent), Azhdarcho (named after a type of Uzbek dragon) and Titanopteryx (whose name means “really big opteryx”). Now, let’s not get carried away and start picturing leathery-winged reptilian bird-things hunting you down from the skies and carrying you off to feed their younglings. Evidence shows that they were simply too large to have effectively grabbed prey and flown off with it.

Oh, is that not comforting? That the bird monster’s only problem was being too fucking gargantuan to fly away with your corpse after it killed you? Sorry. Does this scale diagram help?

The Azhdarchidae didn’t fly away with its prey like modern-day hawks, but only because that’s nowhere near terrifying enough. No, the Azhdarchidae would spot you from the air, slam down into the ground next to you and creepily hobble-wing-charge your ass, scooping you up into its huge, jagged beak. We’re not exaggerating that disturbing, high-speed death-waddle — scientists believe that Azhdarchidae had a “particularly efficient terrestrial locomotion,” which they were able to discern from preserved tracks that showed it placing its feet in front of its wing-claws as it moved.

Sadly, that beast is not the fever dream of a horror game designer, but rather a real, once-living predator called a gorgonopsid, which was essentially a bear-sized saber-toothed dog-lizard with a 3-foot-long skull. Gorgonopsids of the genus Inostrancevia were even larger — about the size of a rhino — with canines roughly 4 inches long. Gorgonopsids were the dominant predator on land for the bulk of the Permian period, only being wiped out by the Permian-Triassic extinction event, which rebooted 90 percent of all life on Earth.

The Cretaceous period was basically the Earth’s goth phase, when all it cared about was finding something evil and monstrous enough to freak out its conservative parents. And it finally found that in the Hainosaurus and Tylosaurus, two types of prehistoric sea lizard that mama sharks used to scare their little shark babies into finishing their mackerel. Oh, and hey: You don’t need to imagine what those freaky shark nightmares looked like; National Geographic has done that for you.

But don’t worry; it’s not what it looks like. Tylosaurus didn’t really use that row of vicious teeth, nor even the two additional rows behind it. They were just there to make sure anything it swallowed whole didn’t wriggle free.

They mostly only used those three rows of giant razor-sharp fangs as a barb-wire fence to keep their prey from escaping being digested alive. It was like a sarlacc the size of a school bus, except this one could actually chase you down and force you into its belly.

They ate literally anything they could catch, including plesiosaurs, which is basically the Loch Ness Monster. Isn’t that comforting? Even monsters have monsters they’re scared of.

Funny. Who slipped concept art from the first Ghostbusters into our article research?

Wait, what? That’s not Zuul? That’s Daeodon, the granddaddy of modern pigs? That’s what bacon used to look like?!

Daeodon was about the size of a rhino, and while modern boars are just angry pigs with fur, this thing was also equal parts Cape buffalo and leopard.

The name literally means “hostile destructive teeth,” but the creature was for a time known simply as Dinohyus, or “terrible pig.” They were “massive opportunistic omnivores,” meaning that they pretty much ate whatever they could get their considerable jaws around. Which, uh … would be most things, by the look of it. Here, have a screenshot from the BBC’s Walking With Beasts.

If there is one thing you take away from your time on Cracked, let it be this: No matter how terrified you are of the sea, you aren’t terrified enough. Kronosaurus and Liopleurodon embody everything that could possibly be frightening about the ocean (well, except for maybe tentacles, but that’s likely only because they thought tentacles were delicious).

Liopleurodon looked like a rough draft of a crocodile rejected by God with a note to “Tone it way, way down, man.” It regularly reached 33 feet long, with one specimen discovered that had a jawbone 10 feet long. Given the proportions of some of the more complete remains found, some scientists speculate that Liopleurodon actually grew up to 50 feet long. Much like the Tylosaurus, the only prey big enough to quell the mighty hunger of Liopleurodon was other crazy, huge monsters, seen here in BBC’s insane artistic rendering: 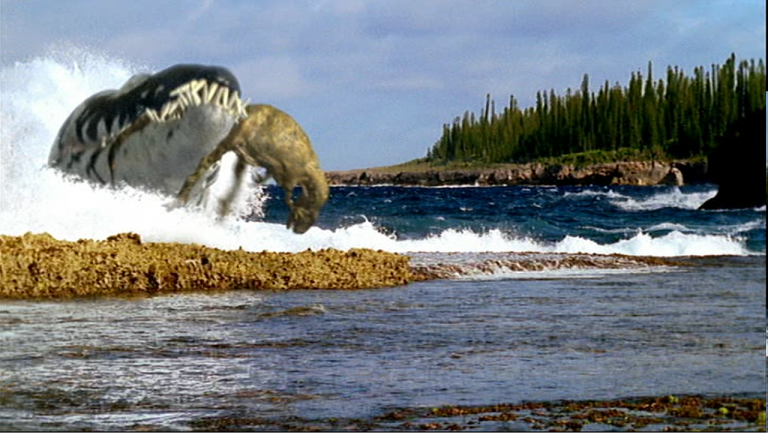 Speaking of the living avatars of fear on Earth, let’s talk about the Kronosaurus, which was likely even bigger than Liopleurodon. Kronosaurus was named after the Titan Kronos, who was such a grand, evil bastard that he ate his own children (who were already pretty giant and terrifying themselves).

Kronosaurs had large “banana-shaped” teeth and thick jaws designed to crush the shells of ammonites, which were ancient shelled squids from back before nature decided that armoring the Kraken was “perhaps a bit overkill.”

Coming face-to-face with a T. rex would be a bad day for anyone. The only thing worse would be somehow surviving that encounter only to find out he’s got a pissed-off big brother waiting around the corner. But don’t freak out, the T. rex doesn’t have a more terrifying rivalry.

It has two: Giganotosaurus and Carcharodontosaurus.

Both lived about 100 million years ago, were roughly 45 feet long and made the T. rex look like the neurotic, asthmatic nerd of the Rex family. The Carcharodontosaurus is pictured above, and is considered to be the second largest land predator in history (that’s called foreshadowing, friends). While Gigonotosaurus lived in South America and looked like this:

There’s a unique subgenre of terror that’s actually augmented by a bit of goofiness. It’s like spotting a clown holding a carving knife: Somehow the big floppy shoes make him so much worse than a normal knife-wielding maniac. So it is with the Dunkleosteus, a 30-foot murder-fish bred with a tank and armed with giant, buck-toothed blades all up in its face.

We’re not embellishing a harmless thing because it looks scary: The Dunkleosteus is estimated to have possessed the strongest bite out of anything. Ever. For some perspective, one of the strongest bites on Earth today comes from the hyena, at 2,000 Newtons (about 500 pounds of force). They easily crack bones with their mouths. The T. rex is estimated to have had a bite around 13,000 Newtons (3,000 pounds of force), which, once you realize bones crack at 1/6 that force, just seems like spite.

The Dunkleosteus had around 150 million Pascals of bite force, roughly 22,000 pounds of force per square inch. That is so powerful they changed units of measurement just to calculate it. If you came across a Dunkleosteus while exploring the ocean in the world’s most well-armored time-traveling submarine, Dunkleosteus would not only still eat you, but complain that, if anything, you were a bit soggy.

Dunkleosteus could also open its mouth in a 50th of a second, meaning that it vacuumed in animals that would normally be fast enough to swim away from it. Usually, fish either have a fast bite or a powerful one, because you can get plenty of food with only one of the two. But Dunkleosteus had both, because evolution is a spiteful bitch that hates life like they used to date and life banged its sister the night before the wedding.

1 - The Largest Land Predator Ever

That’s a Spinosaurus, and it grew up to 60 feet long. Its “crocodile-like” jaws easily reached 5 feet in length alone, and it sported a jaunty sail on its back, because who was going to say anything about it?

Believed to be the largest predator ever to walk the Earth, Spinosaurus is, at least for now, the King Scary Bastard in an entire epoch of the scariest bastards in history. Here’s the mouth of one of Spinosaurus’ smaller, gentler cousins, Suchomimus:

Jesus, is that a skull or industrial logging equipment? That’s it: We’re starting a collection to distribute cyanide pills to toddlers, females and Internet comedians. Because if Jurassic Park ever comes to life and gets a hold of any of these things, humanity’s best option is to just get the hell out of this whole “nature” thing altogether, and brother, we’re calling it now — it is women, children and Cracked writers first.

Everything We Know About The Original Jurassic Park 4 Script

Jurassic World is the fourth...

Have You Ever Wondered Why the T. Rex Had Such Tiny Arms?

Flowering Plants Originated Between 149 and 256 Million Years Ago, Researchers Say

Angiosperms (flowering plants) are neither...

You don’t have long left to snag the biggest...

Paleontologists in Canada have analyzed the...

While fossils provide us clues of the basic...