This Is The Ultimate Dinosaur Road Trip | Paleontology World

Eighty million years ago, a ferocious predecessor of Tyrannosaurus rex stalked the western shore of an ancient seaway that flooded through North America, slicing the continent in two.

Named Lythronax, or "king of gore," this 2.5-ton tyrannosaur stood a menacing eight feet tall and 24 feet long. Its powerful jaws could swiftly grab prey and tear it apart.

Lythronax is one of many magnificent new dinosaurs that paleontologists have unearthed across the northern Colorado Plateau, helping them piece together a complex evolutionary history.

Gazing across these stark desert landscapes, it's hard to envision a lush, verdant Jurassic Park. Yet in Utah alone, scientists have identified more than 100 dinosaur species just since the mid-1990s, says James Kirkland, Utah's state paleontologist.

"We're in the golden age of paleontology right now," said Kirkland. "These past 25 years, we've had a five-fold increase in numbers of dinosaur species identified in Utah. We now have more [known] dinosaur species than any other state in the nation."

Between about 220 and 65 million years ago, dinosaurs on what's now the Colorado Plateau endured dramatic geologic and climatic changes that moved continents, transformed swamplands into sand dunes and created the inland sea where the fearsome Lythronax hunted. To survive, they diverged into a wondrous array of creatures that left behind ample evidence of their presence.

Any dinosaur buff's road trip bucket list has to include the Dinosaur Diamond Prehistoric Highway, a fascinating tour through some of the best paleo sites on the Colorado Plateau. It includes active digs, world-class museums and scenic trails where you can literally track a dinosaur. And the whole loop — plus a couple of essential detours — can easily be done in a week or two.

Let's journey back in time to the dawn of dinosaurs in this region. 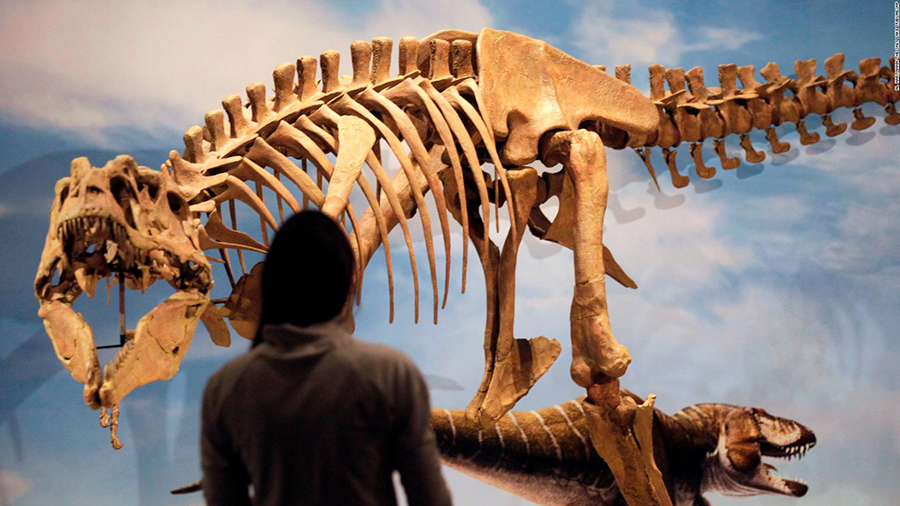 Start in Salt Lake City by "boning up" on paleo history to understand how geology and climate affected dinosaur evolution. The Natural History Museum of Utah takes you back 252 million years to the beginning of the Mesozoic Era, which spanned 187 million years from the early Triassic to the Jurassic to the Cretaceous period.

Most of the dinosaurs are locals, excavated in Utah, including an 80-foot long Barosaurus and groundbreaking new finds like the horned Utahceratops and Lythronax. After its discovery in 2009, the "king of gore" made waves when a research team concluded that this type of tyrannosaur, closely related to T. rex, had evolved some 80 million years ago, 10 million years earlier than previously thought.

Visitors can watch staff prep research specimens in the lab and even take on the role of a paleontologist at a dig. 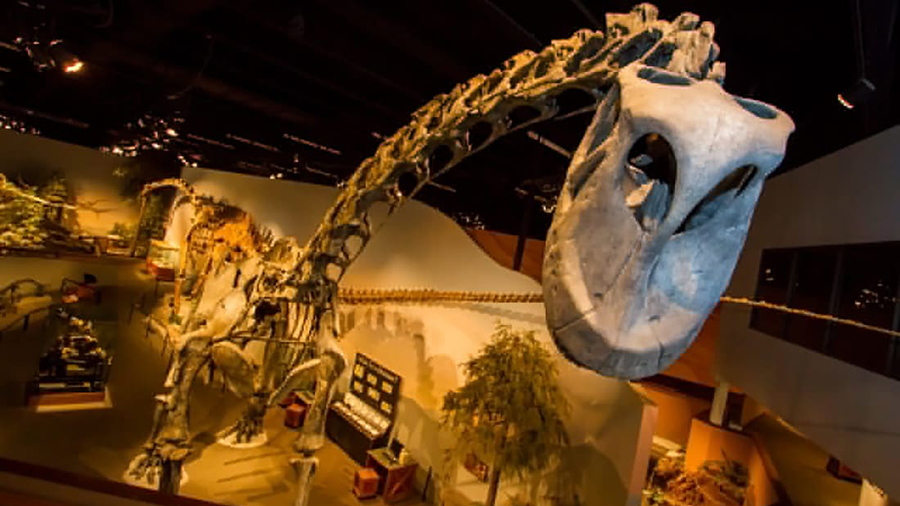 Prepare to be dazzled by one of the world's largest dinosaur displays at the interactive Museum of Ancient Life in Lehi, Utah. Here you'll see 60 complete skeletons, including the biggest dinosaur discovered: the 120-foot Supersaurus.

Kids can pretend to be paleontologists unearthing ancient fish fossils in the Junior Paleo Lab. In Dinosaur Revolution, they can mimic dinosaur behavior and undertake "Mesozoic missions" to learn more about these ancient creatures.

Next, head east toward Colorado to see one of the world's premiere dinosaur sites: Dinosaur National Monument. On the way, stop in Vernal at the Utah Field House of Natural History Museum, another fossil hotspot that will get you primed to explore this spectacular dinosaur graveyard.

Straddling the Utah-Colorado border along the Green River just outside Jensen, Utah, Dinosaur National Monument provides an up-close view of Carnegie Quarry, which has produced at least 11 species of dinosaurs over the past century.

These include the formidable predator Allosaurus, the long-necked, plant-eating Diplodocus and the armored Stegosaurus. The Quarry Exhibit Hall encases a massive sandstone wall where visitors gaze in awe at some 1,500 dinosaur bones in situ -- meaning in their original place -- still embedded in rock after tens of millions of years.

4. Grand discoveries in the Grand Valley

First explored by paleontologists in 1899 after the railroad arrived, Colorado's Grand Valley quickly became famous for dinosaurs when Elmer Riggs excavated a 75-foot giant called Brachiosaurus in 1900. A trail circles Riggs Hill and marks the sites of two excavations, including Riggs' big discovery.

Northwest of Grand Junction, stroll the Trail Through Time, a well-interpreted loop passing by the Mygatt-Moore Quarry, where paleontologists have uncovered more than 4,000 dinosaur bones. In nearby McInnis Canyons National Conservation Area, trek up Dinosaur Hill and see where Riggs discovered a 70-foot, 30-ton Apatosaurus. Enjoy magnificent views of Colorado National Monument's rugged canyons and the Colorado River.

A tour of Grand Valley paleo wouldn't be complete without the Dinosaur Journey Museum in Fruita, which boasts skeletons of Velociraptor and Camarasaurus, a 50-foot-long plant eater. The museum features realistic robotic dinosaurs, including a T. rex, Stegosaurus and Triceratops.

Visitors can peer into a working paleo lab and touch actual dinosaur bones and a footprint containing a dinosaur skin impression. Sign up to spend a day at the Mygatt-Moore Quarry, an active dig site where you can volunteer alongside working paleontologists.

Moab is an adventure sports destination and the gateway to two popular national parks: Arches and Canyonlands. But the area also boasts several trails with well-preserved dinosaur tracks.

The crown jewel is Mill Canyon, where you can walk an elevated boardwalk above hundreds of younger Cretaceous-period tracks made 110 million years ago. Panels along the boardwalk feature vivid artwork depicting these dinosaurs in formerly lush, watery landscapes teeming with crocodiles.

"It's probably one of the best dinosaur track sites you can visit in the United States," said paleontologist Rob Gay, director of education at the Colorado Canyons Association.

Stop at Moab Giants, an interactive museum showcasing what scientists are learning from dinosaur tracks. Walk a half-mile trail with 130 realistic, full-size replicas of local dinosaurs.

The Museum of Moab exhibits local specimens, including Gastonia, an armored, Cretaceous dinosaur with long spikes protruding from its body and tail. The museum is due to fully reopen in 2020 after remodeling; contact the museum about special programming in the meantime.

Passing through the gorgeous red-rock country of the southern San Rafael Swell, State Route 24 offers a scenic drive to the tiny town of Hanksville and the remarkable Hanksville-Burpee Dinosaur Quarry.

Perhaps the largest single dinosaur site in North America, it's chock full of skeletons -- so many that full excavation could take centuries. After just a decade, the quarry has produced everything from tiny prehistoric animals to 70-foot-long giants.

Like Dinosaur National Monument, the Hanksville-Burpee Quarry was once part of a big river system that buried and preserved remains, which helps explain the rich diversity of specimens. "It's one of the most beautiful dinosaur sites of the Jurassic that I know of," said Kirkland.

The Burpee Museum of Natural History offers public tours when its crews are excavating. Contact the BLM field station in Hanksville to plan your visit, which requires a high clearance vehicle.

After touring nearby Capitol Reef National Park, drive southwest to one of the hottest paleo research sites in the country: Grand Staircase-Escalante National Monument.

Groundbreaking new finds -- including Lythronax and an armored, knobby-headed species of ankylosaur discovered in 2008 -- occur here almost every year. Paleontologists are amassing a remarkable trove of data about the late Cretaceous (near the end of the age of dinosaurs) from about 70 to 100 million years ago, a slice of time not well represented elsewhere on the Colorado Plateau.

At that time, the dramatic expanses of sandstone were a flat, humid land of redwood, pine and ginkgo forests. Visit Escalante Petrified Forest State Park to see Jurassic-period stone remnants of similar trees, then continue on Scenic Byway 12 toward Bryce Canyon National Park.

Keep your eyes peeled for a sign along the byway announcing The Blues, a panorama of blue-gray shale badlands that have produced many of the monument's recent dinosaur discoveries. The Blues are evidence of the inland Cretaceous sea that divided North America, creating a separate continent called Laramidia.

The BLM visitor center in Big Water features an exciting exhibit of horned dinosaurs adorned with giant spikes and shields, including Triceratops. Don't miss the Twenty Mile Wash Dinosaur Trackway, where hundreds of tracks and even tail marks spread out across a pale sandstone outcropping.

In the two decades since a local optometrist unearthed dinosaur tracks at his farm, paleontologists have pulled thousands of fossils from what's now known as the St. George Dinosaur Discovery Site.

You'll see enormous rock slabs that preserve dinosaurs in situ. Scientists have found evidence of local dinosaurs sitting on the edge of a vast prehistoric lake, and the museum claims the world's largest collection of dinosaur swim tracks. Recovered fish bones and scales suggest some ate fish and shared the lake with crocodiles.

Finally, return to the San Rafael Swell to tour the densest known concentration of Jurassic dinosaur bones in the world at the Cleveland-Lloyd Dinosaur Quarry, now the centerpiece of the brand new Jurassic National Monument. Some 12,000 bones representing at least 74 different dinosaurs have been recovered here since the 1920s.

The museum features an enormous Allosaurus along with skulls of Diplodocus, Stegosaurus and Camarasaurus. At the quarry, peer over a balcony into light gray limestone to pick out the jet-black bones. Scientists are still unraveling the mystery of why so many dinosaurs died here.

10. The quarry and the ancient sea

On your way back to Salt Lake City, stop in Price at the Prehistoric Museum to learn more about the quarry and the ancient sea that so powerfully affected life here.

Before you go: Remember that removing dinosaur and other vertebrate fossils from public lands is illegal. When in doubt, ask.

Be safe: This is a breathtakingly beautiful region, but its rugged, remote terrain and extreme temperatures prove deadly every year. Check out these common-sense safety tips at visitutah.com.

Can We Expect Jurassic World 3 To Blast Off Into Space?

Iridescence is responsible for some of the...

Paleontologists in Argentina have discovered...