According to a new rumor, dinosaurs might be coming to Battlefield V. What are you even doing to us anymore, 2019?

Now, Jurassic Park is an icon of 1990s cinema. The world will never forget Jeff Goldblum prattling about chaos theory, Samuel L. Jackson’s hilariously fake severed arm, or that brachiosaurus with the head cold. Now that we’ve also seen Chris Pratt training velociraptors in Jurassic World for a modern audience (as part of his world domination plan to be cast in every movie ever), one thing’s been made abundantly clear: dinosaurs will always captivate our imaginations.

From Barney to the awe-inspiring specimens seen in museums around the world, there’s just something about these unimaginable titans that fascinates us. Being the pop culture legends they are, it’s no surprise that they’ve popped up in all kinds of video games. Battlefield, however, is probably one franchise that you wouldn’t expect to feature them.

Nevertheless, the word on the gaming grapevine is that dinosaurs are going to be added to Battlefield V in some way. As Game Rant reports, YouTube’s JackFrags has created a video presenting the (somewhat dubious) evidence. In a flow chart documenting the development of the game, we’re told, a message is hidden in Morse code. It reads, “soon preround red flares.” 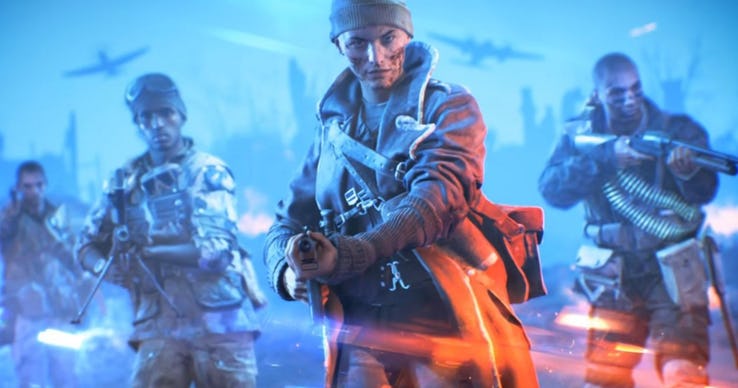 As any Jurassic Park fan will tell you, the series would be nowhere without those trusty red flares. That scene where the T. Rex is lured away by them? That’s some unforgettable stuff, right there. Is this a way of indicating that some kind of "dinosaur mode" will be added to the game, without being too overt about it? The internet seems to think so, but then the internet does love to grab at these theories and run away with them.

For those wondering why a World War II-themed shooter would feature dinosaurs, there is an odd precedent for this sort of thing. Remember that megalodon Easter egg in Battlefield I? With members of the dev team posting obscure images that may or may not feature pterodactyls, it’s clear that something’s going on.

Hopefully, the upcoming showcase at E3 2019 will shed some light on this odd situation. Heck, the game could use a shot in the arm, especially with that unfortunate business with Firestorm duos.

There are currently five films in the...

What if Dinosaurs Were Still Alive Today?

Okay, first of all, one subgroup...

Pigment discovered in fossilised remains may...

Extraordinary Diversity on Land Is Not a Recent Phenomenon, Says New Study