One of the things that has made the Jurassic Park and Jurassic World movies so powerful and meaningful over the past 27 years is the franchises' sense of wonder through the eyes of children. Netflix hopes to capture that feeling once again with the upcoming Jurassic World: Camp Cretaceous animated series, so much so that the streaming platform accidentally promoted it nearly 18 months early back in March 2019. But now that it's nearly time for the show to finally hit the streaming devices around the world in September 2020, longtime fans of the franchise, and newcomers, might be looking for some information on the animated series.

Well, we have some good news for you then, because we've put together a quick list of things we know and what we can expect from the new animated series Jurassic World: Camp Cretaceous.

Jurassic World: Camp Cretaceous Is An Animated Show About Teens Trapped In The Park

Instead of focusing on adult paleontologists, botanists, and mathematicians, Jurassic World: Camp Cretaceous will take audiences on a journey from the perspective of the park's key demographic: kids, well, teenagers to be exact. According to Netflix, the animated series will follow a group of six teens who are invited to attend Camp Cretaceous on the other side of Isla Nublar. Everything seems fine at first, but when dinosaurs escape their enclosures and Jurassic World enters a state of chaos, the campers are stranded in the park with no contact with the outside world. Together, the six teens must come together and come up with a plan to escape the park. 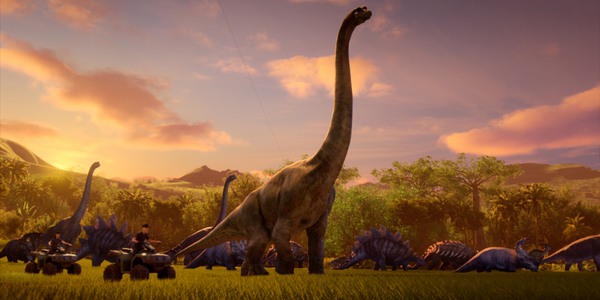 We won't have to wait long to catch Jurassic World: Camp Cretaceous because Season 1 of the Netflix animated series premieres September 18, 2020, with all eight, 30-minute episodes available to stream at launch. Those of us who love to binge shows will be able to knock out this dinosaur adventure in a few hours.

The Show Is Aimed Towards Kids

Anyone who has watched the trailer (which you can watch at the bottom of this article) or come across the McDonald's Happy Meal toys from the show knows that Jurassic World: Camp Cretaceous is aimed at a younger audience than the mainline movies. With a story centering around a group of young teenagers having to overcome obstacles in their environment and friendships, the show looks like it will be packed with all sorts of lessons for kids. And going off the previous efforts from the series' showrunners and executive producers Scott Kreamer (Pinky Malinky) and Lane Lueras (Kung Fu Panda: The Paws of Destiny), expect to see some wild and lighthearted adventures along the way.

In September 2020, Deadline reported that the show has also launched a website, CampCretaceous.com, featuring games, lessons, and information about Jurassic World and its dino inhabitants.

The Show Is Set On The Same Island From The Movies 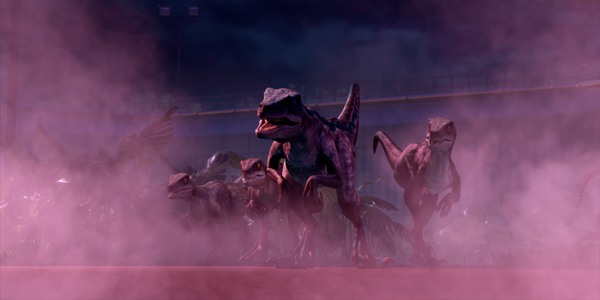 Does Isla Nublar sound familiar? Well, it should because it's only been the setting of five of the six movies in the franchise (The Lost World: Jurassic Park was set on Isla Sorna). According to Variety, Jurassic World: Camp Cretaceous will be set during the timeline of 2015's Jurassic World, but instead of hanging around the visitors center and more populated sections of the doomed park, the campers will be on the far end of the island taking part in all sorts of adventures at the high-tech dinosaur camp with no contact with their counselors or other members of park staff.

The Jurassic World: Camp Cretaceous cast is split up into two camps: the teens at the center of the struggle and the two counselors who guide them through the scenic yet deadly island. Leading the adult side of the cast are Jameela Jamil of The Good Place, as Roxie, and Glen Powell, of Top Gun: Maverick, as Dave, who are both skilled paleontologists who run the ill-fated camp.

Then there is the group of campers who find themselves in the wrong place at the wrong time. They consist of Paul-Mikél Williams as Darius Bowman, Jenna Ortega as Kenji Kon, Kauser Mohammed as Yaz Fadoula, Raini Rodriguez as Sammy Gutierrez, and Sean Giambrone as Ben Pincus. Each of the campers has a different personality and with their own strengths and weaknesses that will all come into play throughout the group's trek back to civilization.

Steven Spielberg And Colin Trevorrow Are Among The Show's Executive Producers

Back when Jurassic World: Camp Cretaceous was first announced in June 2019, THR reported that the show would be a collaboration between Netflix and DreamWorks Animation, with the latter bringing in some heavy hitters. In addition to Scott Kreamer and Lane Lueras running the show, Steven Spielberg, Frank Marshall, and Colin Trevorrow also serve as executive producers, with Zack Stentz acting as a consulting producer. How Spielberg, Marshall, and Trevorrow, who all played major roles in getting the various Jurassic Park and Jurassic World projects off the ground, will impact the show remains to be seen, but it doesn't hurt having some of the most successful dinosaur directors attached to the project.

Watch The Jurassic World: Camp Cretaceous Trailer Down Below

As noted in the introduction, Netflix has been excited about Jurassic World: Camp Cretaceous for some time now, and the streaming giant recently dropped a full-fledged trailer to get everyone hyped up about what's in store for the campers as they explore Isla Nublar and try to get home in one piece. You can watch the trailer down below:

Are you excited for Jurassic World: Camp Cretaceous and to see what new adventures are in store for one of entertainment's most successful properties? Make sure to sound off in the comments below and let us know what you're most excited about ahead of the show's September 18, 2020 premiere on Netflix.

Paleontologists in Argentina have found a...

The Real Reason Jurassic Park Should Be Considered A Horror Movie

After the idea was teased in Fallen...

A new species of tyrannosaurine dinosaur...

Black Beauty is a well...

There are few movies quite as iconic as...