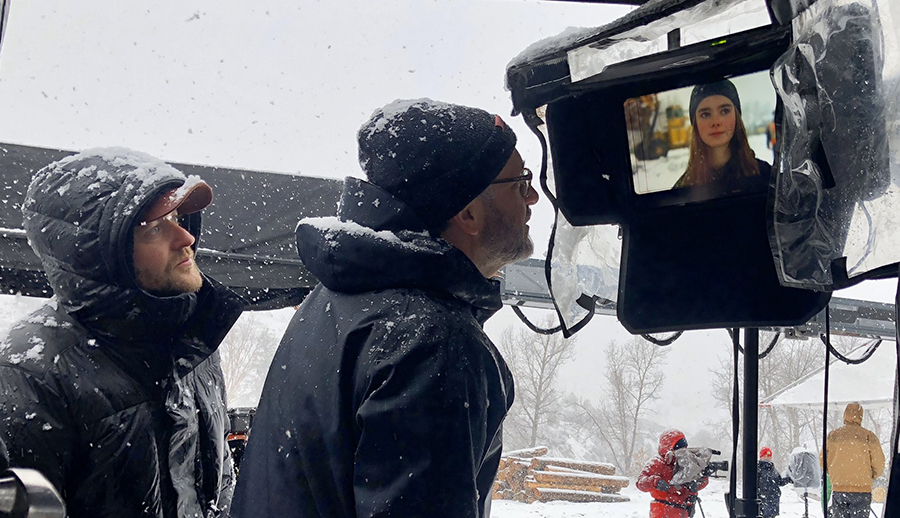 Director Colin Trevorrow posts a behind the scenes photo from the Jurassic World: Dominion set, teasing the possibility of dinosaurs in the snow.

Director Colin Trevorrow has posted a behind the scenes photo from the Jurassic World: Dominion set, teasing the possibility of dinosaurs in the snow. Like every other ongoing movie production in Hollywood, the Jurassic World sequel is currently on-hold due to the coronavirus pandemic and, because of this, may struggle to make its tentative release date. It won't be for lack of trying, though, as Trevorrow has confirmed he's working on the film from home during the shutdown.

The conclusion to the Jurassic World trilogy, Dominion sees Trevorrow return to the director's chair after J.A. Bayona replaced him at the helm on 2018's Jurassic World: Fallen Kingdom (which Trevorrow still co-wrote and produced). In addition to tying up plot threads from the previous two movies, Dominion aims to further bridge the gap between these films and the Jurassic Park trilogy by bringing back Sam Neill, Jeff Goldblum, and Laura Dern in their roles as Alan Grant, Ian Malcolm, and Ellie Sattler. This will actually be Goldblum's second go-round with the Jurassic World trilogy at that, following his brief appearance at the beginning and end of Fallen Kingdom.

Among the many other characters returning for Jurassic World: Dominion are Maisie Lockwood (Isabella Sermon), the granddaughter of the late Sir Benjamin Lockwood - though she's really a clone of his daughter - who was rescued and essentially adopted by series leads Owen (Chris Pratt) and Claire (Bryce Dallas Howard) towards the end of Fallen Kingdom. Trevorrow recently teased her return in the film by tweeting a BTS photo from the Dominion set, showing him shooting a scene with Sermon.

More intriguingly (since it was a given Sermon would return), this photo suggests Dominion will be the first Jurassic movie to feature dinosaurs in the snow. Since Fallen Kingdom ended with the surviving dinosaurs from Isla Nublar being set free in the world, it stands to reason this new film will show the creatures living in all sorts of different environments, this snowy landscape included. The second Jurassic World movie offered an exciting taste of just that in both its final minutes and credits scene, showing dinosaurs popping up everywhere from a zoo to the beach and even Las Vegas. in Jurassic World canon, carnivorous dinosaurs are warm-blooded and herbivores are cold-blooded, so wintery conditions alone might not be enough to protect people from becoming a dino-snack in Dominion.

After Jurassic World kept its action contained to Isla Nublar and nearly half of Fallen Kingdom took place in Lockwood Manor, the hope is Dominion will take advance of its open-world premise to deliver a experience unlike anything in the Jurassic franchise so far. Last year's short film Battle at Big Rock, which Trevorrow directed, provided a sneak peek at what life is like for humans post-Fallen Kingdom, and the results bode well for the trilogy finale. At the very least, here's hoping we get to see Blue the Velociraptor make a snowman with Owen, Claire, and Maisie. (Okay, probably not, but no harm in dreaming, right?)

Scotty: The Dinosaur Skeleton Which is a Contender for the Largest T. Rex Ever

10 of the World’s Best Dinosaur Museums

These dinosaur museums will take you back to...

Jurassic World 3: 10 Things "Dominion" Needs To Be A Success

Director Colin Trevorrow has confirmed that...

With 74 Fossils in Her Collection, 12-Year-Old Becomes ‘Youngest Paleontologist’ in India

She says her interest in the subject came...