Jurassic Park 3: What Killed The Boat Crew In The Fog | Paleontology World 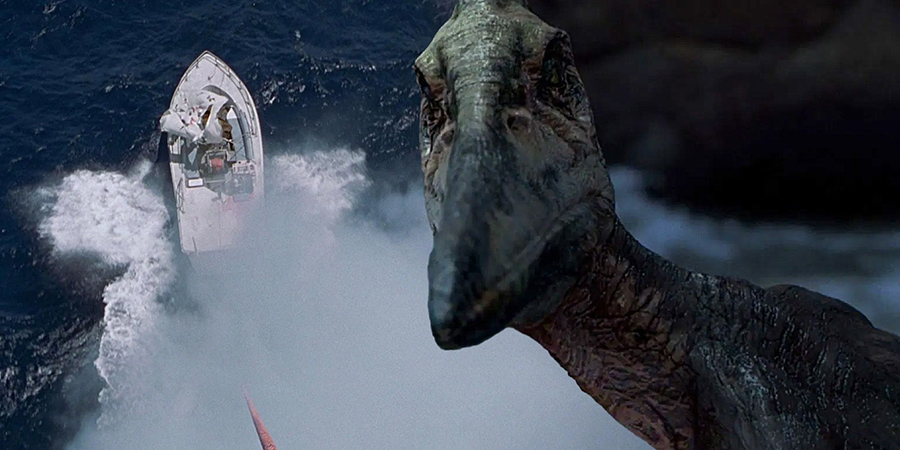 Jurassic Park 3's opening sees the crew killed by a mysterious dinosaur amidst a heavy fog, but the movie reveals clues as to what it is.

In the opening scene of Jurassic Park 3, a boat crew is mysteriously killed by something that lurks in the fog. As Ben Hildebrand rises into the air on a parasailer with his girlfriend's son Eric Kirby, the pair are having a blast. Suddenly the boat jerks. They look down only to see fog and then, horrifyingly, the boat appears, tattered and smeared with blood, and the crew members are nowhere to be seen. Neither the characters or the audience knows what happened, but when watched closely, the film gives the answer away.

Jurassic Park loves to highlight one dinosaur in each film (aside from the raptors, which Dr. Alan Grant gushes about to his ex-girlfriend Ellie early on in film 3), that acts as the "big bad." In the first and second films, the T-rex had its moment in the sun, with a male T-rex even escaping into San Diego in a nod to Godzilla in The Lost World: Jurassic Park. The second film also introduces Site B: Isla Sorna, where all the dinosaurs that weren't suited to the park on Isla Nublar were relegated. Though the movie never definitively says which fearsome creature attacks the boat drivers, it is possible to figure out the puzzle through context clues and storytelling. Like every Jurassic Park movie, new dinosaurs are bound to come on the scene, and surely one of them is the culprit.

The monster in question is an aquatic beast or a flying predator. One dinosaur that makes persistent appearances through Jurassic Park III is the Pteranodon. The Pteranodon can fly over the sea to catch fish. There is an interesting callback to the fog from the boat scene when the characters must cross a dubious bridge and are ambushed by Pteranodon. This, however, is a red herring. The velocity of the onslaught on the boat, along with the smear of blood left behind, suggests a much bigger animal, one that could clamp its jaws around a human body. There is one creature that is said to be on Isla Sorna but isn't shown in the film: a Deinosuchus. The Deinosuchus resembles a giant crocodile that travels swiftly by water and could dispatch the crew in short order. But the Deinosuchus doesn't make it into the film, and Jurassic Park likes to showcase its monsters, not hide them. There is only one major villain that this story presents, and this time it is not T-rex or the raptors, but the big dinosaur of Jurassic Park 3: The Spinosaurus.

The Spinosaurus, a semi-aquatic lizard, first appears when Alan and the Kirbys land on the island, devouring one of their pilots and giving a one-two punch to the T-rex while trying to squish the airplane into a tasty tube of human flesh. The Spinosaurus keeps coming into play, including a scene in which they must dig through its leavings to find Mr. Kirby's satellite phone. When Eric is reunited with his parents, the Spinosaurus rears its horrible head, chasing them and breaking through the iron fence.

In its final attack, the Spinosaurus stalks the group through a deep river, showing off its ability to swim silently. This revelation cements the notion that the dinosaur was the killer of the boat crew all along. The creature handles itself readily in the water despite its size, even dumping Alan, the hero, into the water in a cage where he must use his resourcefulness to fight for his life. With its constant presence in the film, whether seen or unseen, and climactic stand-off against the protagonist, one thing is clear: Jurassic Park 3 wanted to terrorize audiences with the Spinosaurus.

Jurassic World 3: 4 Dinosaurs We Hope To See Return In Dominion

Even with an extra summer separating us...

Paleoart: The Strange History of Dinosaurs in Art – in Pictures

Since the early 19th century, artists have...

The extremely well-preserved hatchling of ...

About 48 million years ago, an owl swooped...