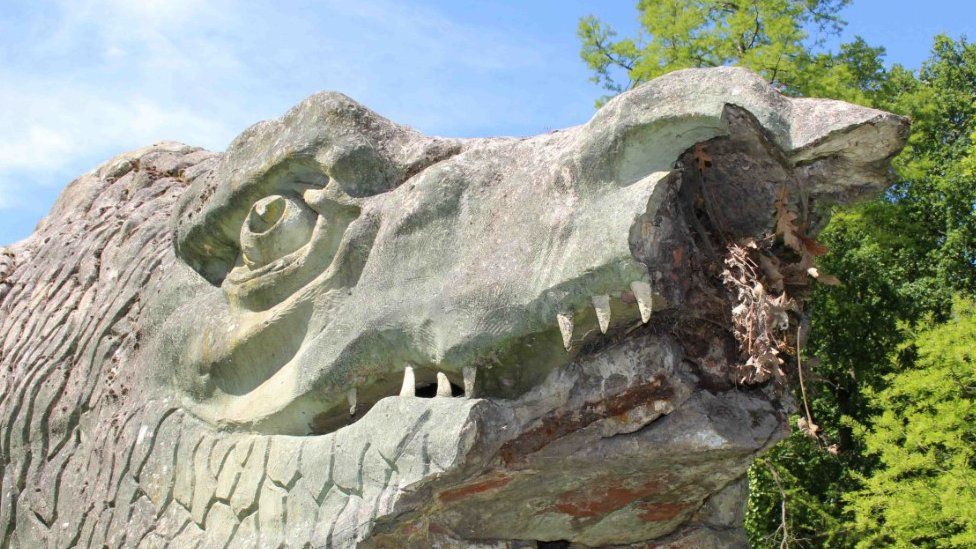 A Grade I-listed dinosaur sculpture which has stood in a south London park since the Victorian era has had an "emergency facelift".

The nose and mouth of the Megalosaurus, which is on an island in Crystal Palace Park, broke off last May.

Intricate work has seen 22 new teeth and a "prosthetic jaw" installed on the 167-year-old sculpture.

The Megalosaurus is part of more than 30 animal sculptures in the park, which are on the Heritage At Risk register.

Historic England said the "emergency rescue mission" was made possible due to a grant from the Culture Recovery Fund.

Fundraising from the Friends of Crystal Palace Dinosaurs also helped.

Duncan Wilson, Historic England's CEO, said: "The towering Megalosaurus is loved by children and adults alike, with a fan club across the capital, the country and indeed the world.

"It is heartening to think that this restoration work will give so much pleasure to so many people, as we begin to explore historic places again."

They were created between 1852-1855 by Benjamin Waterhouse Hawkins, a natural history artist, and represent the first major worldwide outreach project of science as "edu-tainment".

Historic England said the creatures represented the cutting edge of scientific knowledge at the time and would have been "an extraordinary sight" to the Victorians.

Queen Victoria and Prince Albert were said to have been fascinated by the dinosaur displays in Crystal Palace and had visited the site several times.