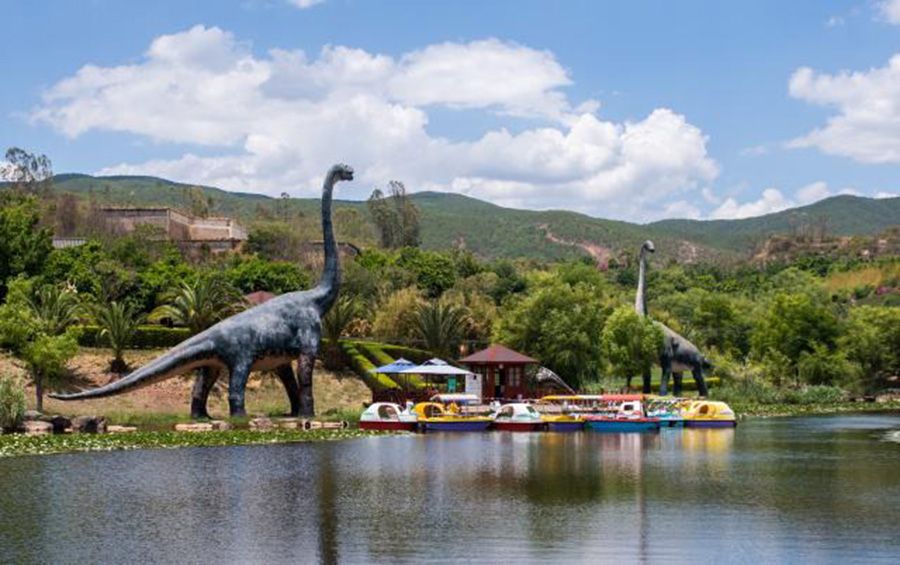 The second phase of the "World Dinosaur Valley," a dinosaur-themed park, opened to the public on Sunday in Lufeng County, with a variety of interactive theme programs launched.

The park covers not only entertainment programs, but also the popularization of knowledge about dinosaurs. A lot of dinosaur fossils from the Jurassic Period remain intact in the park.

"The second phase of the park began in 2017, and it covers an area of 240,000 square meters," said Pan Xiong, marketing superviser of the park. "Since the park opened to public in 2008, we have received more than 10 million tourists."

In the new project, tourists can experience themed-programs such as "The dinosaur crisis," during which visitors sit in a "time-travel machine" to go back to the Jurassic world, Pan said. More than 40 entertainment programs have been set up in the park.

Since the first dinosaur fossil was discovered in the county, Lufeng has been shown to have one of the largest numbers of dinosaur fossils in the world.

Paleontologists in China have uncovered a...

At the end of Jurassic World:...

Around 90 million years ago, eastern and...

20 Jurassic Park Sets Every Fan Needs To Visit In Hawaii

You don't have to be Jeff Goldblum, Laura...

Giant beavers (members of the ...

In March 2019, a group of rock climbers discovered a string of large 'chicken paw prints' at the Sharen Bomb Shelter in Chongqing,...

Paleontologists Created the Most Detailed 3D-Model of Ankylosaur Brain

Paleontologists at St Petersburg University created the most detailed virtual 3D-model of the endocranial cast and blood vessels of...

The fossil remains, which measure less than a meter and a half in length, were discovered at a dig in the province of Rio Negro in...

A sparkly, glittery toy dinosaur flew along with NASA astronauts Bob Behnken and Doug Hurley on the ...

Paleontologists in Canada have analyzed the fossilized stomach contents from the exceptionally preserved specimen of ...

The relationship between parasite ...

A 425-million-year-old fossil millipede from Scotland is the oldest-known ‘bug’ (an insect, arachnid or other related creature),...

Dinosaurs have been the subject of paintings, movies, cartoons, books, museums, and much more. For years, dinosaurs have captivated...

A 246 million-year-old extinct marine reptile that died with its unborn offspring still in its womb has been identified as a new...